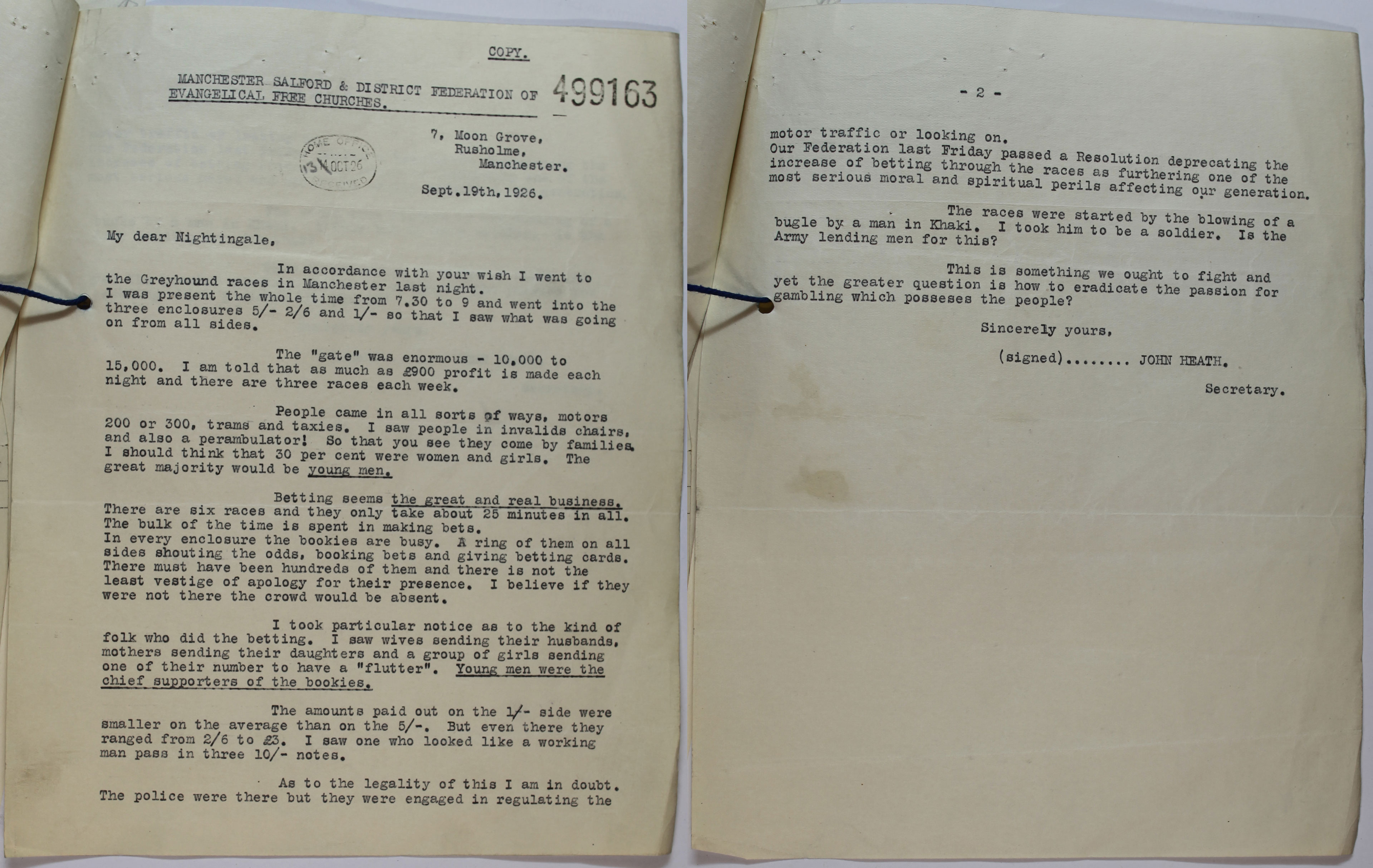 Copy of a letter about dog racing sent to the Home Office from the secretary of the Manchester, Salford & District Federation of Evangelical Free Churches, 19 September, 1926 (Catalogue ref: HO 45/14222)

In accordance with your wish I went to the greyhound races in Manchester last night. I was present the whole time from 7.30 to 9 and went into three enclosures 5/-, 2/6 and 1/- so that I saw what was going on from all sides.

People came in all sorts of ways, motors 200 or 300, trams and taxies. I saw people in invalids chairs, and also a perambulator! So that you see they come families/ I should think that 30 per cent were women and girls. They great majority would be young men.

Betting seems the great and real business. There are six races and they only take about 25 minutes in all. The bulk of the time is spent in making bets. In every enclosure the bookies are busy. A ring of them on all sides shouting the odds, booking bets and giving betting cards. There must have been hundreds of them and there is not the least vestige of apology for their presence. I believe if they were not there the crowd would be absent.

I took particular notice as to kind of folk who did the betting. I saw wives sending their husbands, mothers sending their daughters and group of girls sending one of their numbers to have a “flutter”. Young men were the chief supporters of the bookies.

The amounts paid out on the 1/- side were smaller on the average than on the 5/-. But even there they ranged from 2/6 to £3. I saw one who looked like a working man pass in three 10/- notes.

As to the legality of this I am in doubt. The police were there but they were engaged in regulating motor traffic or looking on.

Our Federation last Friday passed a Resolution deprecating the increase of betting through the races as furthering one of the most serious moral and spiritual perils affecting our generation.

The races were started by the blowing of a bugle by a man in Khaki. I took him to be a soldier. Is the army lending men to this?

This something we ought to fight and yet the greater question is how to eradicate the passion for gambling which possesses the people?