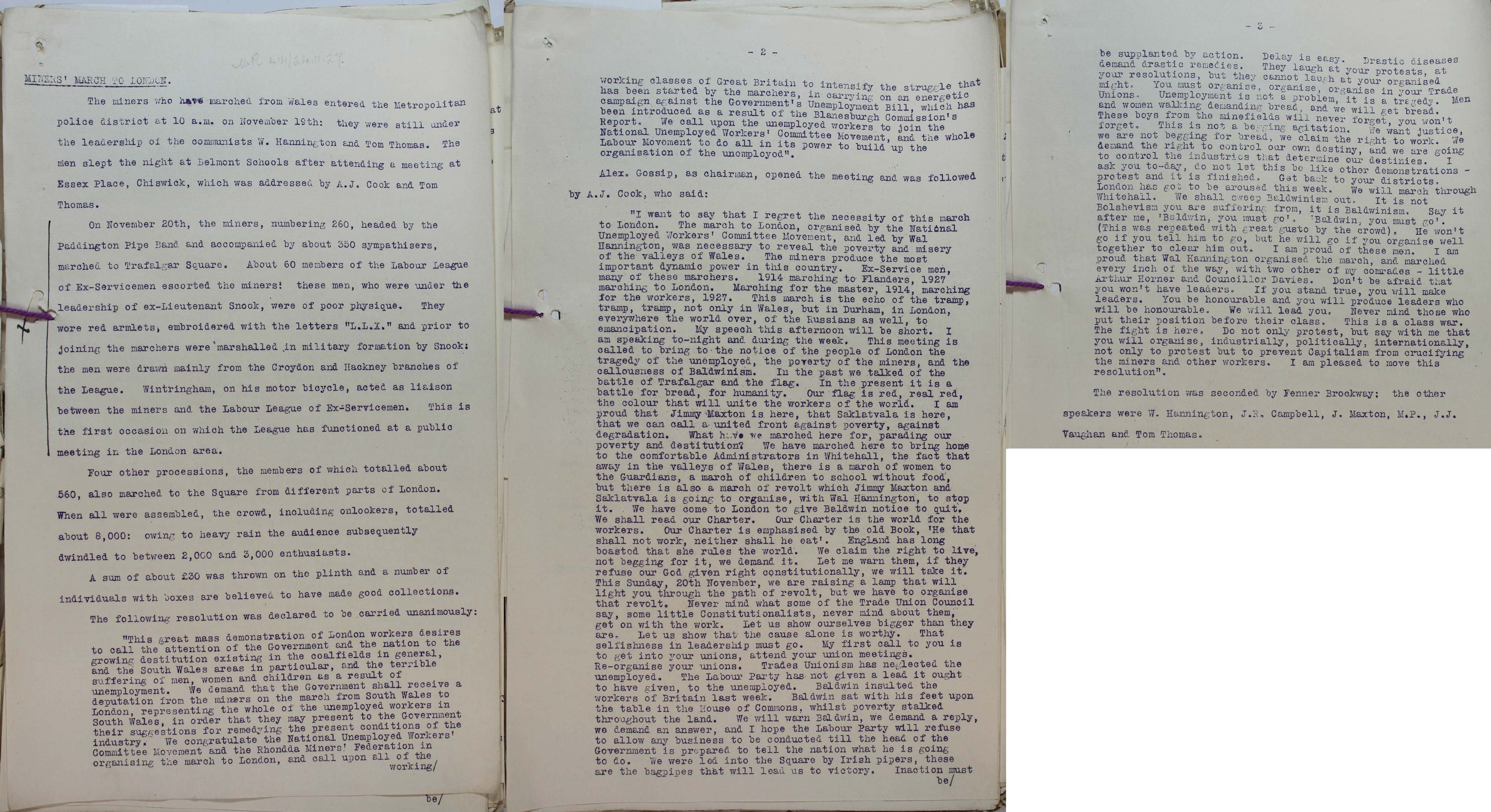 The miners who have marched from Wales entered the Metropolitan police district at 10 a.m. on November 19th: they were still under the leadership of the communists W. Hannington and Tom Thomas. The men slept the night at Belmont Schools after attending a meeting at Essex Place, Chiswick, which was addressed by A.J. Cook and Tom Thomas.

On November 2oth, the miners, numbering 260, headed by the Paddington Pipe Band and accompanied by about 350 sympathisers, marched to Trafalgar Square. About 60 members of the Labour League of Ex-Servicemen escorted the miners: these men. Who were under the leadership of ex-Lieutenant Snook, were of poor physique. They wore red armlets, embroidered with the letters “L.L.X.” and prior to joining the marchers were marshalled in military fashion by Snook: the men were drawn mainly from the Croydon and Hackney branches of the League. Wintringham, on his motor bicycle, acted as liaison between the miners and the Labour League of Ex-servicemen. This is the first occasion on which the League has functioned at a public meeting in the London area.

Four other processions, the members of which totalled about 560, also marched to the Square from different parts of London. When all were assembled, the crowd, including onlookers, totalled about 8,000: owing to heavy rain the audience subsequently dwindled to between 2,000 and 3,000 enthusiasts.

A sum of about£30 was thrown on the plinth and a number of the individuals with boxes are believed to have made good collections. The following resolution was declared to be carried unanimously:

“This great mass demonstration of London workers desires to call the attention of the Government and the nation to the growing destitution existing in the coalfields in general, and in the South Wales areas in particular, and the terrible suffering of men, women and children as a result of unemployment. We demand that the Government shall receive a deputation from the miners on the march from South Wales to London, representing the whole of the unemployed workers in South Wales, in order that they may present to the Government their suggestions for remedying the present conditions of the industry. We congratulate the Nation Unemployed Workers’ Committee Movement and the Rhondda Miners’ Federation in organising the march to London, and call upon all of the working classes of Great Britain to intensify the struggle that has been started by the marchers, in carrying on an energetic campaign against the Government’s Unemployment Bill, which has been introduced as result of the Blanesburgh Commission’s Report. We call upon the unemployed workers to join the National Unemployed Workers’ Committee Movement, and the whole Labour Movement to do all in its power to build up the organisation of the unemployed”.

Alex. Gossip, as chairman, opened the meeting and was followed by A.J.Cook, who said:

“I want to say that I regret the necessity of this march to London. The march to London, organised by the National Unemployed Workers’ Committee Movement, and led by Wal Hannington, was necessary to reveal the poverty and misery of the valleys of Wales. The miners produce the most important dynamic power in this country. Ex-service men, many of these marchers. 1914 marching to Flanders, 1927 marching to London. Marching for the master, 1914, marching for the workers 1927. This march is the echo of the tramp, tramp, tramp, not only in Wales, but in Durham, in London, everywhere the world over, of the Russians as well, to emancipation. My speech this afternoon will be short. I am speaking to-night and during the week. This meeting is called to bring to the notice of the people of London the tragedy of the unemployed, the poverty of the miners, and the callousness of Baldwinism. In the past we talked of the battle of Trafalgar and the flag. In the present it is a battle for bread, for humanity. Our flag is red, real red the colour that will unite the workers of the world. I am proud that Jimmy Maxton is here, that Saklatvala is here, that we can call a united front against poverty, against degradation. What have we marched here for, parading our poverty and destitution? We have marched here to bring home to the comfortable Administrators in Whitehall, the fact that away in the valleys of Wales, there is a march of women to the Guardians, a march of children to school without food, but there is also a march of revolt which Jimmy Maxton and Saklavala is going to organise, with Wal Hannington, to stop it. We have come to London to give Baldwin notice to quit. We shall read our Charter. Our Charter is the world for the workers. Our Charter is emphasised by old book, ‘He that shall not work, neither shall he eat’. England has long boasted that she rules the world. We claim the right to live, not begging for it, we demand it. Let me warn them, if they refuse our God given right constitutionally, we will take it. This Sunday, 20th November, we are raising a lamp that will light you through the path of revolt, but we have to organise that revolt. Never mind what some of the Trade Union Council say, some little Constitutionalists, never mind about them, get on with the work. Let us show ourselves bigger than they are. Let us show that the cause alone is worthy. That selfishness in leadership must go. My first call to you is to get into your unions, attend your union meetings. Re-organise your unions. Trades Unionism has neglected the unemployed. The Labour Party has not given the lead it ought to have given, to the unemployed. Baldwin insulted the workers of Britain last week. Baldwin sat with his feet upon the table in the House of Commons, whilst poverty stalked throughout the land. We will warn Baldwin, we demand a reply, we demand an answer, and I hope the Labour Party will refuse to allow any business to be conducted till the head of the Government is prepared to tell the nation what he is prepared to tell the Nation what he is going to do. We were led into the Square by Irish Pipers, these are the bagpipes that will lead us to victory. Inaction must be supplanted by action. Delay is easy. Drastic diseases demand drastic remedies. They laugh at all your protest, at your resolutions, but they cannot laugh at your organised might. You must organise, organise, organise in your Trade unions. Unemployment is not a problem, it is a tragedy. Men and women walking demanding bread, we claim the right to work and we will get bread. These boys from the minefields will never forget, you won’t forget. This is not a begging agitation. We want justice, demand the right to control our own destinies. I protest and it is finished. Get back to your districts. London has got to be roused this week. We will march through Whitehall. We shall sweep Baldwinism out. It is not Bolshevism you are suffering from, it is Baldwinism. Say it after me, ‘Baldwin, you must go’. (This was greeted with great gusto by the crowd). He won’t go if you don’t tell him to go, but he will go if you organise together to clear him out. I am proud of these men. I am proud that Wal Hanninton organised the march, and marched every inch of the way, with two other of my comrades- little Arthur Horner and Councillor Davies. Don’t be afraid that you won’t have leaders. If you stand true, you will make leaders. You be honourable and you will produce leaders who will be honourable. We will lead you. Never mind those who put their position before their class. This is a class war. The fight is here. Do not only protest, but say with me that you will organise, industrially, politically, internationally, not only to protest but to prevent Capitalism from crucifying the miners and other workers. I am pleased to move this resolution.”

The resolution was seconded by Fenner Brockway: the other speakers were Wal Hannington, J.R. Campbell, J. Maxton, M.P., J.J. Vaughan and Tom Thomas