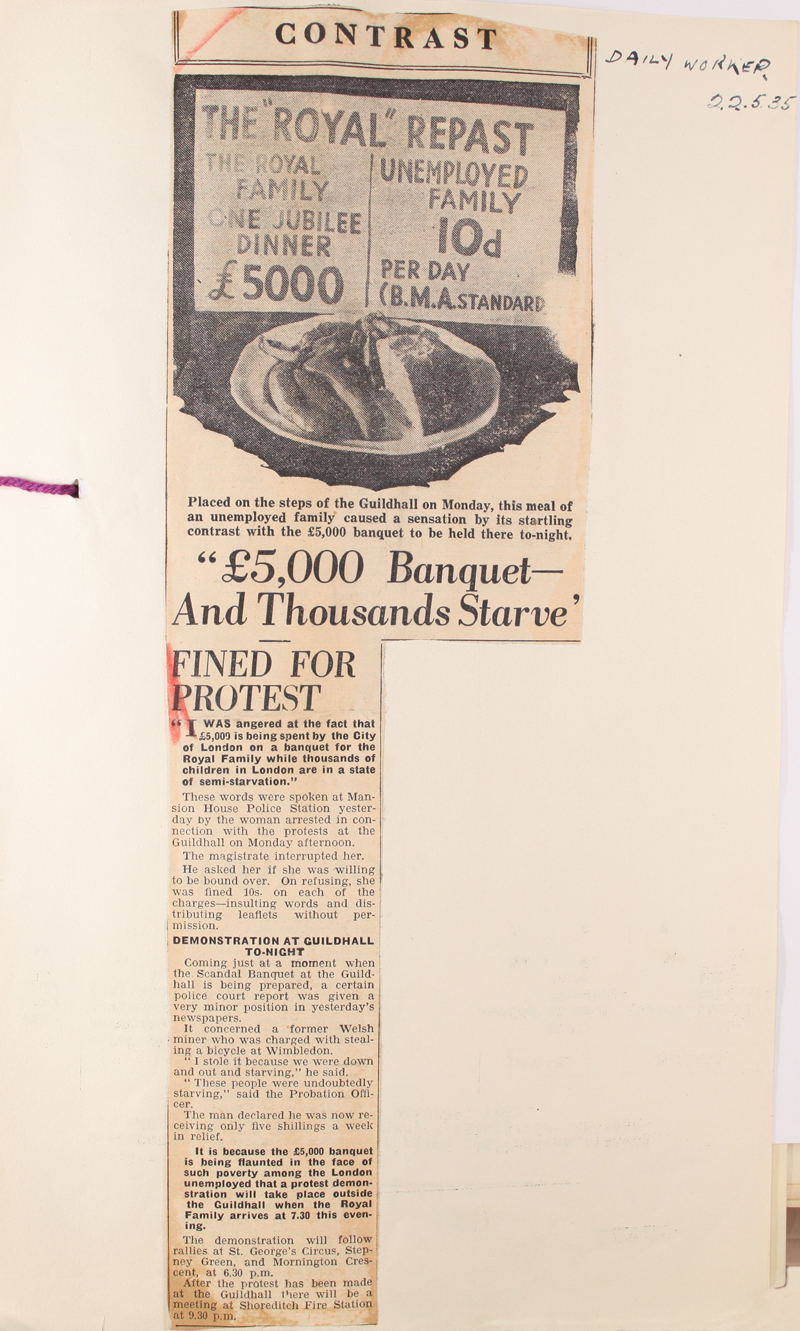 By kind permission of the Morning Star.

In 1935, King George V celebrated his Silver Jubilee, marking 25 years of his reign.

THE ROYAL FAMILY ONE JUBILEE DINNER £5000

UNEMPLOYED FAMILY 10d PER DAY (B.M.A STANDARD) [The British Medical Association estimated that the cost of food for a family with older children costly roughly 10d a day person].

[Picture showing a plate of food]

Placed on the steps of the Guildhall on Monday, this meal of an unemployed family caused sensation by its startling contrast with the £5000 banquet to be held there to- night.

“I WAS angered at the fact that £5,000 is being spent by the City of London on a banquet for the Royal Family while thousands of children in London are in a state of semi-starvation.”

These words were spoken at Mansion House Police Station yesterday by the woman arrested in connection with the protests at the Guildhall on Monday afternoon.

The magistrate interrupted her.

He asked her if she was willing to be bound over. On refusing, she was fined 10s. on each of the charges – insulting words and distributing leaflets without permission.

Coming just at a moment when the Scandal Banquet at the Guildhall is being prepared, a certain police court report was given a very minor position in yesterday’s newspapers.

It concerned a former Welsh miner who was charged with stealing a bicycle at Wimbledon.

“I stole it because we were down and out and starving.” he said.

“These people were undoubtedly starving,” said the Probation Officer.

The man declared he was now receiving only five shillings a week in relief.

It is because the £5,000 banquet is being flaunted in the face of such poverty among the London unemployed that a protest demonstration will take place outside the Guildhall when the Royal Family arrives at 7.30 this evening.

The demonstration will follow rallies at St. George’s Circus, Stepney Green, and Mornington Crescent at 6.30 p.m.

After the protest has been made at the Guildhall there will be a meeting at Shoreditch Fire Station at 9.30pm.