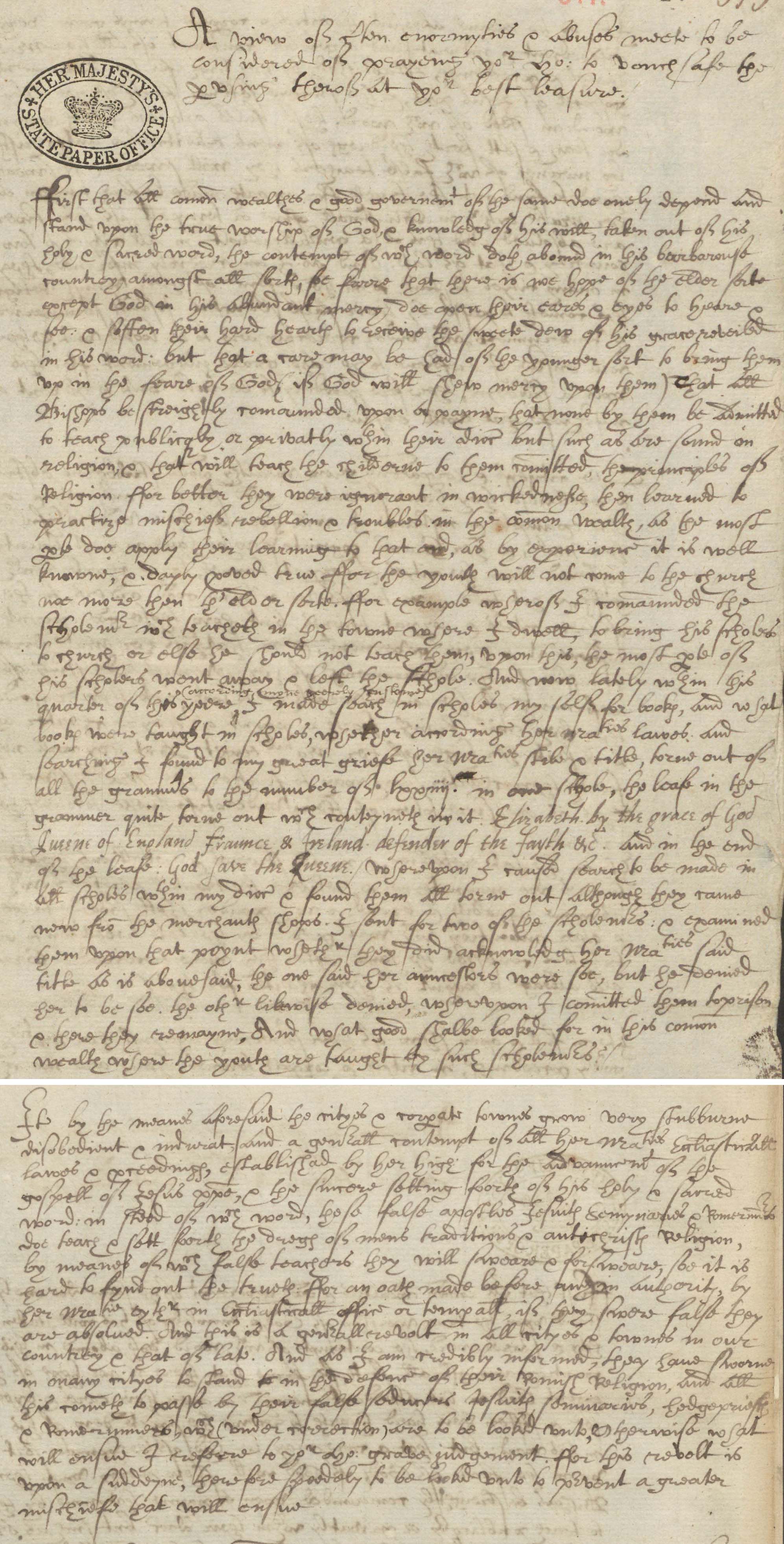 Whereas Loftus (SP 63/154/37) focused his attention on the nobility and gentlemen, Lyon focuses on children and young people in his (rather fraught) assessment of the state of religion in Ireland in 1596.  There is much (fairly standard) invective here, rather than the more focused attempt to put forward a clear strategy for reform that we see in Loftus’s letter.

First that all commonwealthes & good government of the same do only depend and stand upon the true worship of God, & knowledge of his will, taken out of his holy and sacred word, the contempt of which word doth abound in this barbarous country amongst all sorts, so far that there is no hope of the elder sort except God in his abundant mercy do open their ears, & eyes to hear & so & soften their hearts to receive the sweet dew of his grace received in his word: but that a care may be had of the younger sort to bring them up in the fear of God (if God will shew mercy vpon them). That all bishops be straightly commanded upon a pain, that none by them be admitted to teach publicly or privately within their diocese but such as are sound on religion, & that will teach the children to them committed, the principles of religion. For better they were ignorant in wickedness then learned to practice mischiefs, rebellion & troubles in the common wealth, as the most part do apply their learning to that end, as by experience it is well known, & daily proved true. For the youth will not come to the church no more then the elder sort.  For example where of I commanded the schoolmaster which teacheth in the town where I dwell, to bring his scholars to church or else he should not teach them, upon this, the most part of his scholars went away & left the school.  And now lately, within this quarter of this year (according to mine yearly [instructions]) I made search in schools myself for books, and what books were taught in schools, whether according her majesty’s laws and searching I found to my great grief her Majesty’s style & title torn out of all the grammars to the number of lxxiiii in one school, the leaf [page] in grammar quite torn out which containeth in it Elizabeth by the grace of God Queen of England, France & Ireland,  Defender of the Faith etc. and in the end of the leaf [page] God save the Queen, whoever upon I caused search to be made in all schools within my diocese & found them all torn out although they came new from the merchants shops.  I sent for two of the schoolmasters & examined them upon that point whether they did acknowledge her Majesty’s said title as is about said, the one said her ancestors were so, but he denied her to be so,  the other likewise denied where upon I committed them to prison & there they remain.  And what good shall be looked for in this common wealth where the youth are taught by such schoolmasters?…

… Item be the means aforesaid the cities & corporate towns grow very stubborn, disobedient & indurat [hardened in resolve], and a general contempt of all her Majesty’s Ecclesiatical laws & proceedings, established by her highness for the advancement of the gospel of Jesus Christ, & the sincere setting forth of his holy & scared word: instead of which word, these false apostles, Jesuits Seminaries & Romerunners [term of abuse for Catholics] do teach & set forth the dregs of mens’ traditions & anti-christ’s religion, be means of which false teachers they will swear & forswear, so it is hard to find out the truth. For an oath made before any in authority, by her majesty either in ecclesiastical office or temporal, if they swear false [lie on oath] they are absolved, and this is a general revolt in all cities & towns in our country & that of late.  And as I am credibly informed, they have sworn in many cities to stand to in the defence of their Romish Religion, and all this cometh to pass by their false seducers, Jesuits, seminaries, hedgepriests [poor illiterate priests] & Romerumers, which (under correction) are to be looked unto, otherwise what will ensue I reserve to your Lords grave judgement. For this revolt is upon a suddeyne [has happened quickly] therefore speedily to be looked into to prevent a greater mischief that will ensue…