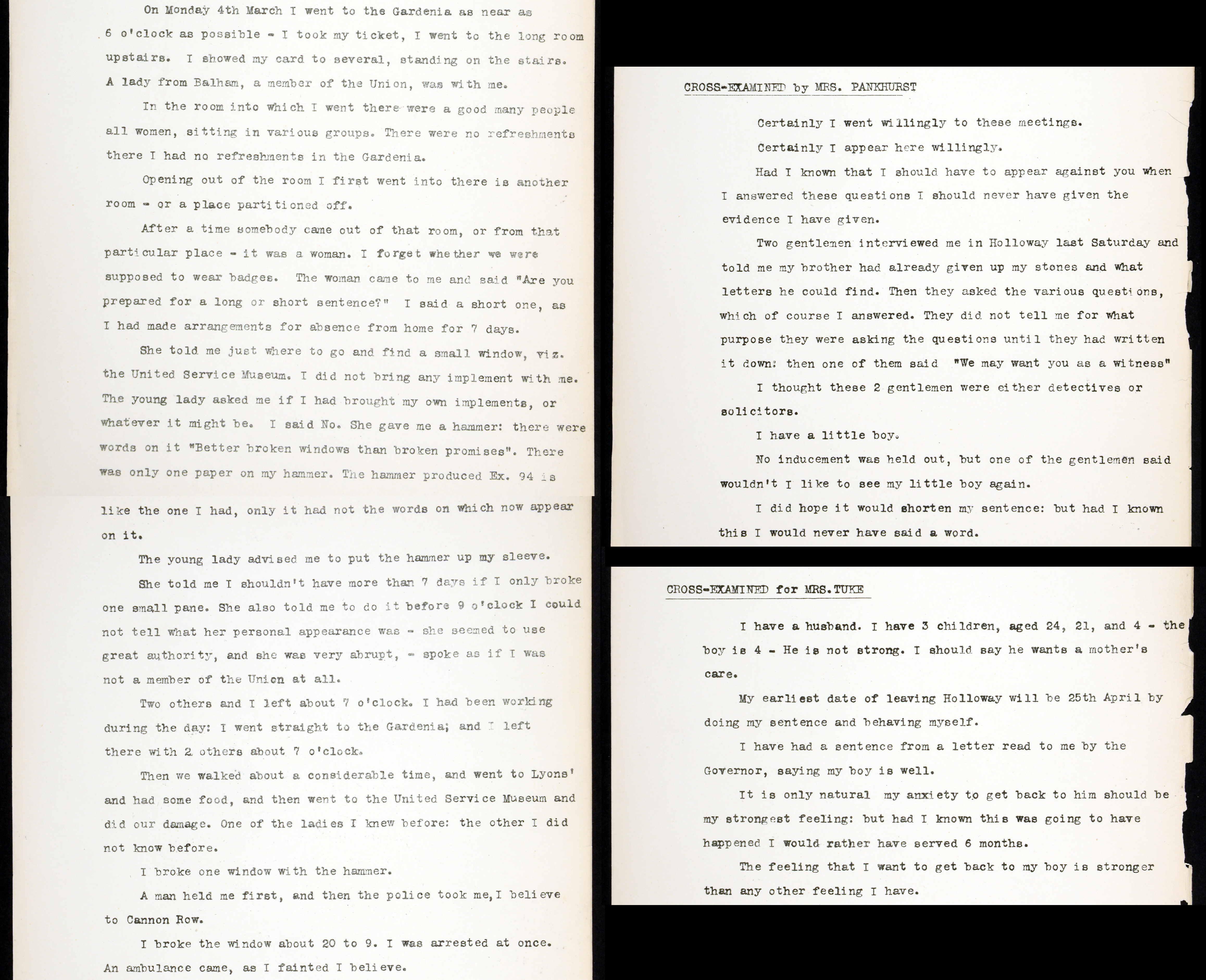 On Monday 4th March I went to the Gardenia as near as 6 o’clock as possible – I took my ticket, I went to the long room upstairs. I showed my card to several, standing on the stairs. A lady from Balham, a member of the Union, was with me.

Opening out of the room I first went into there is another room – or a place partitioned off.

After a time somebody came out of that room, or from that particular place – it was a woman. I forget whether we were supposed to wear badges. The woman came to me and said “Are you prepared for a long or short sentence?” I said a short one, as I had made arrangements for absence from home for 7 days.

She told me just where to go and find a small window, viz. the United Service Museum. I did not bring any implement with me. The young lady asked me if I had brought my own implements, or whatever it might be. I said No. She gave me a hammer: there were words on it “Better broken windows than broken promises”. There was only one paper on my hammer. The hammer produced Ex. 94 is like the one I had, only it had not the words on which now appear on it.

The young lady advised me to put the hammer up my sleeve.

She told me I shouldn’t have more than 7 days if I only broke one small pane. She also told me to do it before 9 o’clock I could not tell what her personal appearance was – she seemed to use great authority, and she was very abrupt, – spoke as if I was not a member of the Union at all.

Then we walked about a considerable time, and went to Lyon’s and had some food, and then went to the United Service Museum and did our damage. One of the ladies I knew before: the other I did not know before.

I broke one window with the hammer.

A man held me first, and then the police took me, I believe to Cannon Row.

I broke the window about 20 to 9. I was arrested at once. An ambulance came, as I fainted I believe. […]

Certainly I went willingly to these meetings.

Had I known that I should have to appear against you when I answered these questions I should never have given the evidence I have given.

Two gentlemen interviewed me in Holloway last Saturday and told me my brother had already given up my stones and what letters he could find. Then they asked the various questions, which of course I answered. They did not tell me for what purpose they were asking the questions until they had written it down: then one of them said “We may want you as a witness”

I thought these 2 gentlemen were either detectives or solicitors.

I have a little boy.

No inducement was held out, but one of the gentlemen said wouldn’t I like to see my little boy again.

I did hope it would shorten my sentence: but had I known this I would never had said a word. […]

My earliest date of leaving Holloway will be 25th April by doing my sentence and behaving myself.

I have had a sentence from a letter read to me by the Governor, saying my boy is well.

It is only natural my anxiety to get back to him should be my strongest feeling: but had I known this was going to have happened I would rather have served 6 months.

The feeling that I want to get back to my boy is stronger than any other feeling I have. […]