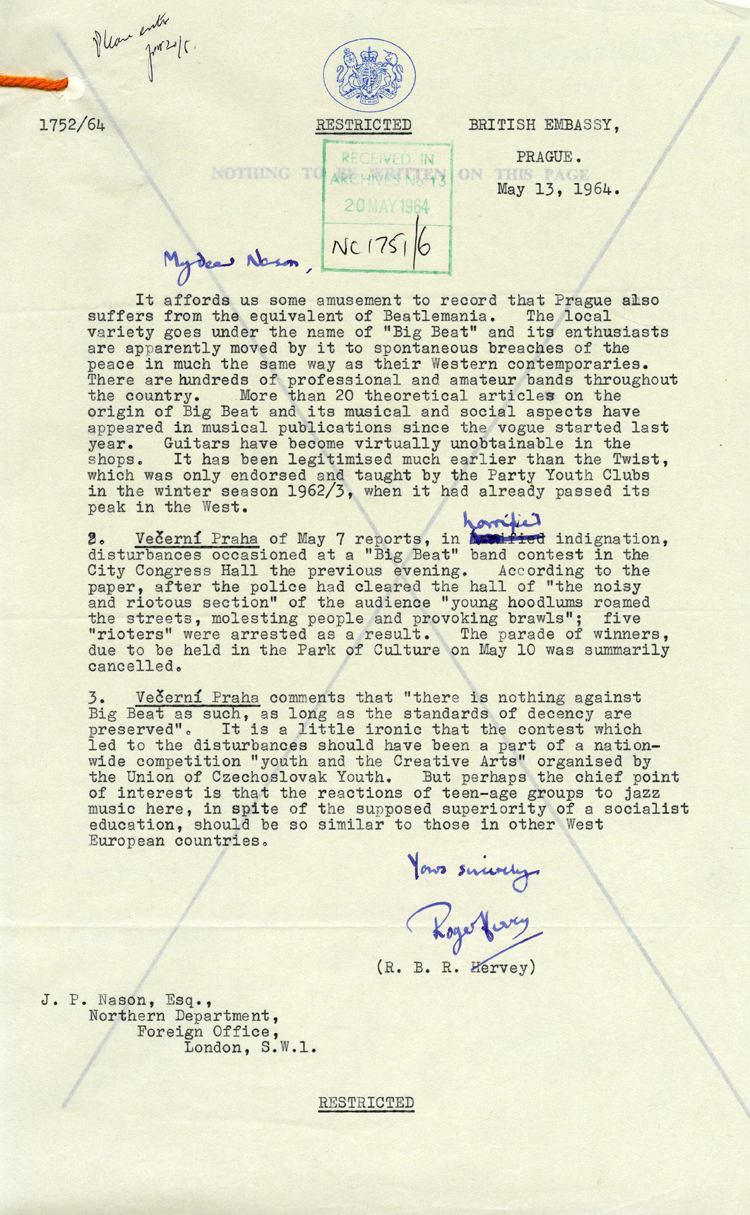 Letter from the British Embassy in Prague to the Northern Department of the Foreign Office in London, May 1964 (FO 371/177493)

It affords us some amusement to record that Prague also suffers from the equivalent of Beatlemania. The local variety goes under the name of “Big Beat” and its enthusiasts are apparently moved by it to spontaneous breaches of the peace in much the same way as their Western contemporaries. There are hundreds of professional and amateur bands throughout the country. More than 20 theoretical articles on the origin of Big Beat and its musical and social aspects have appeared in musical publications since the vogue started last year. Guitars have become virtually unobtainable in the shops. It has been legitimised much earlier than the Twist, which was only endorsed and taught by the Party Youth Clubs in the winter season 1962/3 when it had already passed its peak in the West.

2. Vecerní Praha of May 7 reports, in horrified indignation, disturbances occasioned at a “Big Beat” band contest in the City Congress Hall the previous evening. According to the paper, after the police had cleared the hall of “the noisy and riotous section” of the audience “young hoodlums roamed the streets, molesting people and provoking brawls”; five “rioters” were arrested as a result. The parade of winners, due to be held in the Park of Culture on May 10 was summarily cancelled.

3. Vecerní Praha comments that “there is nothing against Big Beat as such, as long as the standards of decency are preserved”. It is a little ironic that the contest which led to the disturbances should have been a part of a nationwide competition “youth and the Creative Arts” organised by the Union of Czechoslovak Youth. But perhaps the chief point of interest is that the reactions of teen-age groups to jazz music here, in spite of the supposed superiority of a socialist education, should be so similar to those in other West European countries.