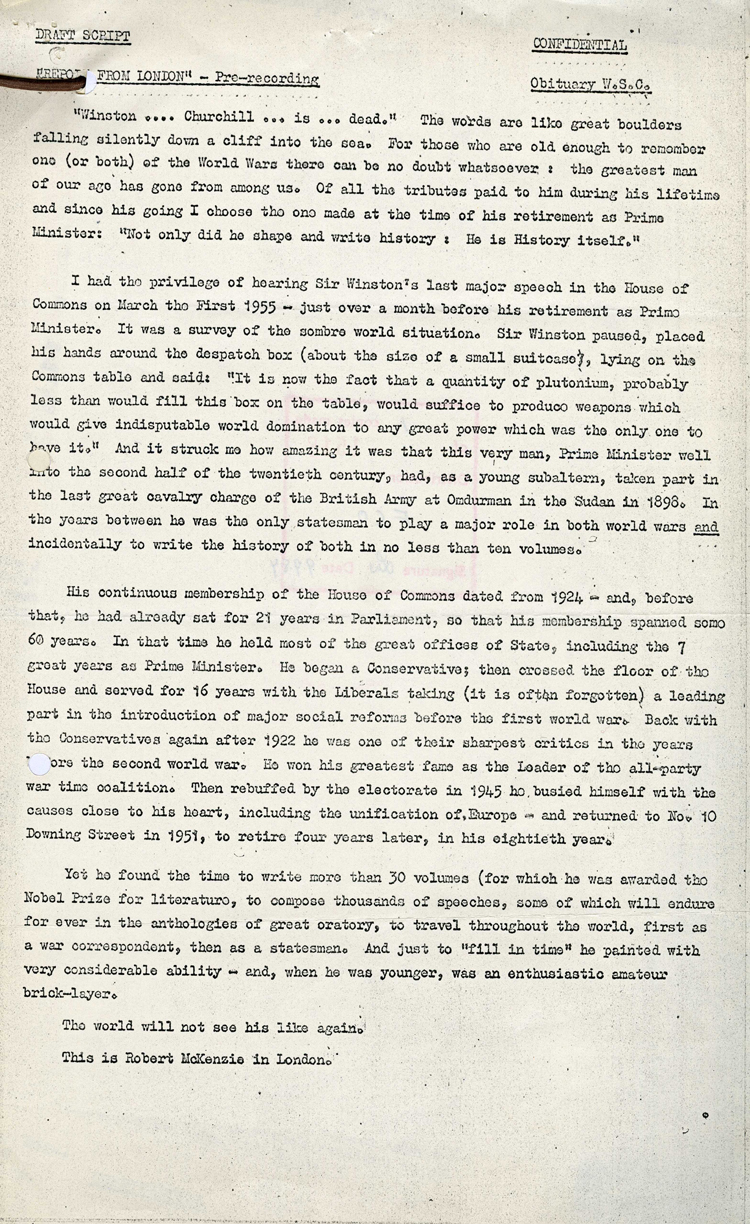 A draft script for Winston Churchill’s obituary to be broadcast by the BBC World Service, prepared in 1962 (INF 12/964)

Churchill suffered a major heart attack, while still in office in 1953, so the BBC and all other national newspapers, would have prepared obituaries in advance, to be used when he died. Churchill died on 24 January 1965.

“Winston …Churchill … is …dead”. The words are like great boulders falling silently down a cliff into the sea. For those who are old enough to remember one (or both) of the World Wars there can be no doubt whatsoever; the greatest man of our age has gone from among us. Of all the tributes paid to him during his lifetime and since his going I choose the one made at the time of his retirement as Prime Minister: “Not only did he shape and write history: He is History itself.”

I had the privilege of hearing Sir Winston’s last major speech in the House of Commons on March the First 1955 – just over a month before his retirement as Prime Minister. It was a survey of the sombre world situation. Sir Winston paused, placed his hands around the despatch box (about the size of a small suitcase), lying on the Commons table and said. “It is now the fact that a quantity of plutonium, probably less than would fill this box on the table, would suffice to produce weapons which would give indisputable world domination to any great power which was the only one to have it.” And it struck me how amazing it was that this very man, Prime Minister well into the second half of the twentieth century, had, as a young subaltern, taken part in the last great cavalry charge of the British Army at Omdurman in the Sudan in 1898. In the years between he was the only statesman to play a major role in both world wars and incidentally to write the history of both in no less than ten volumes.

His continuous membership of the House of Commons dated from 1924 – and, before he had already sat for 21 years in Parliament, so that his membership spanned some 60 years. In that time he held most of the great offices of State, including the 7 great years as Prime Minister. He began a Conservative; then crossed the floor of the House and served for 16 years with the Liberals taking (it is often forgotten) a leading part in the introduction of major social reforms before the first world war. Back with the Conservatives again after 1922 he was one of their sharpest critics in the years before the second world war. He won his greatest fame as the Leader of the all-party war time coalition. Then rebuffed by the electorate in 1945 he busied himself with the causes close to his heart, including the unification of Europe- and returned to No. 10 Downing Street in 1951, to retire four years later, in his eightieth year.

Yet he found the time to write more than 30 volumes (for which he was awarded the Nobel Prize for literature, to compose thousands of speeches, some of which will endure forever in the anthologies of great oratory, to travel throughout the world, first as a war correspondent, then as a statesman. And just to “fill in time” he painted with very considerable ability – and, when he was younger, was an enthusiastic amateur brick-layer. The world will not see his like again.
This is Robert McKenzie in London.