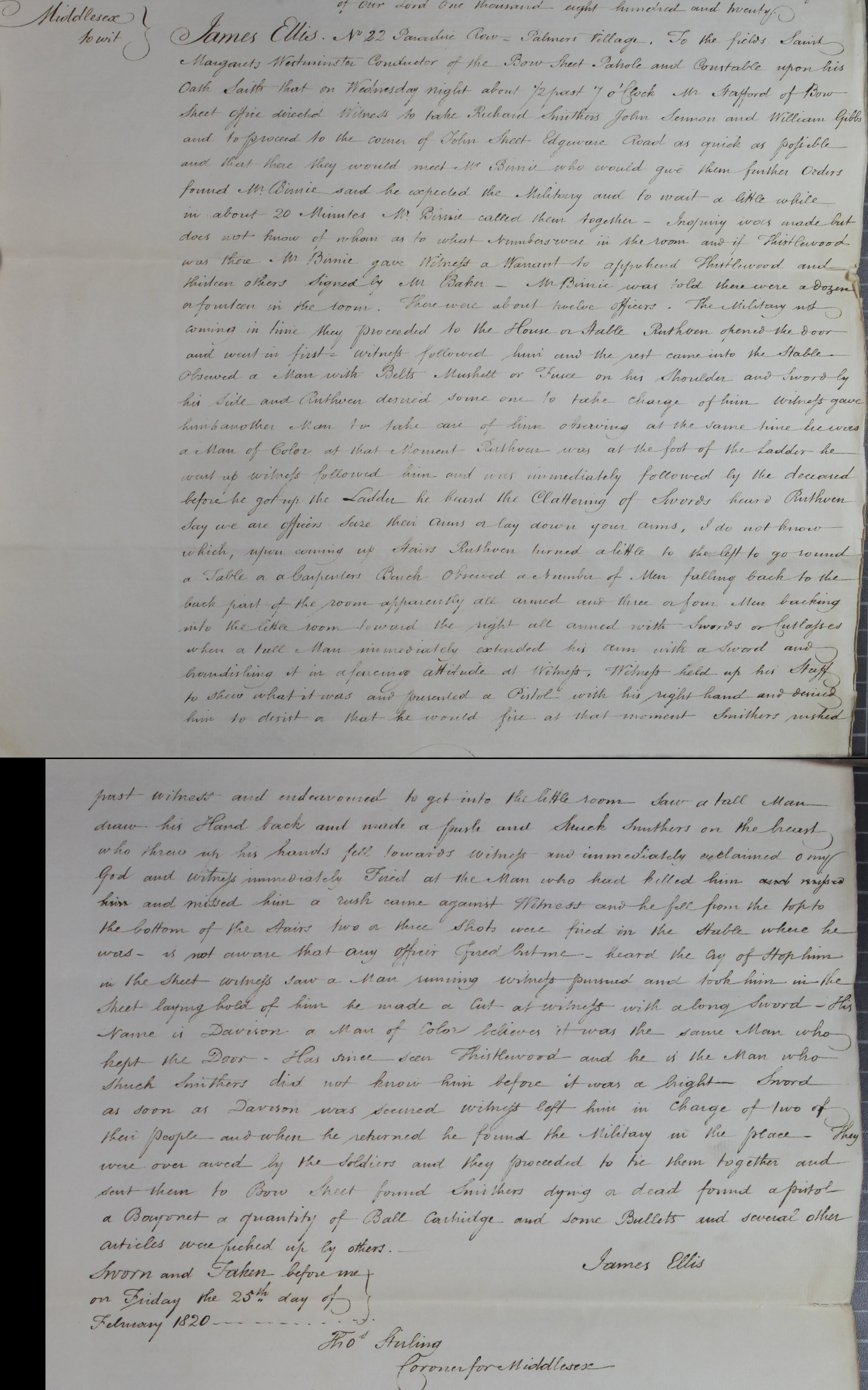 James Ellis, No. 22 Paradise Row, Palmer’s Village. To the fields Saint Margaret’s Westminster, Conductor of the Bow Street Patrole and Constable upon his oath Saith that on Wednesday night about half past 7 o’clock Mr. Stafford of Bow Street office directed witness to take Richard Smithers, John Sermon, and William Gibbs and to proceed to the corner of John Street Edgware Road as quick as possible and that there they would meet Mr. Birnie who would give them further Orders, found Mr. Birnie said he expected the Military and to wait a little while, in about 20 minutes Mr Birnie called them together. Inquiry was made but does not know as to what numbers were in the room and if Thistlewood was there. Mr Birnie gave witness a Warrant to apprehend Thistlewood and thirteen others signed by Mr Baker. Mr Birnie was told there were a dozen or fourteen in the room. There were about twelve officers. The Military not coming in time, they proceeded to the House or Stable. Ruthven opened the door and went in first, witness followed him and the rest came into the stable. Observed a man with Belts, Muskett or Fuses on his shoulder and sword by his side and Ruthven desired someone to take charge of him. Witness gave him to another man to take care of him observing at the same time he was a Man of Colour, at that moment Ruthven was at the foot of the ladder, he went up, witness followed him and was immediately followed by the deceased [Smithers], before he got up the Ladder he heard the Clattering of swords, heard Ruthven say “we are officers, seize their arms” or “lay down your arms”. I do not know which, upon coming up stairs, Ruthven turned a little to the left to go round a Table or a Carpenter’s bench. Observed a number of men falling back to the back part of the room apparently all armed and three or four men backing into the little room toward the right all armed with swords and cutlasses when a tall man immediately extended his arm with a sword and brandishing it in a fencing attitude at witness. Witness held up his staff to show what it was and presented a pistol with his right hand and desired him to desist or that he would fire. At that moment Smithers rushed

past witness and endeavoured to get into the little room, saw a tall man draw his hand back and made a push and struck Smithers on the breast who threw up his hands, fell towards witness and immediately exclaimed “Oh my God” and witness immediately Fired at the man who had killed him and missed him, a rush came against Witness and he fell from the top to the bottom of the stairs, two or three shots were fired in the stable where he was – Is not aware that any officer fired but me, heard the cry of “Stop him” in the street. Witness saw a man running. Witness pursued and took him in the street laying hold of him he made a cut at witness with a long sword. His name is Davison, a man of colour, believes it was the same man kept the door. Has since seen Thistlewood and he is the man who struck Smithers, did not know him before, it was a light sword. As soon as Davison was secured, witness left him in charge of two of their people and when he returned he found the military in the place were over awed by the soldiers and they proceeded to tie them together and sent them to Bow Street. Found Smithers dying a dead, found a pistol, a bayonet, a quantity of ball cartridge and some bullets and several other articles were picked up others.

Sworn and taken before me