‘They were mostly mere boys’ 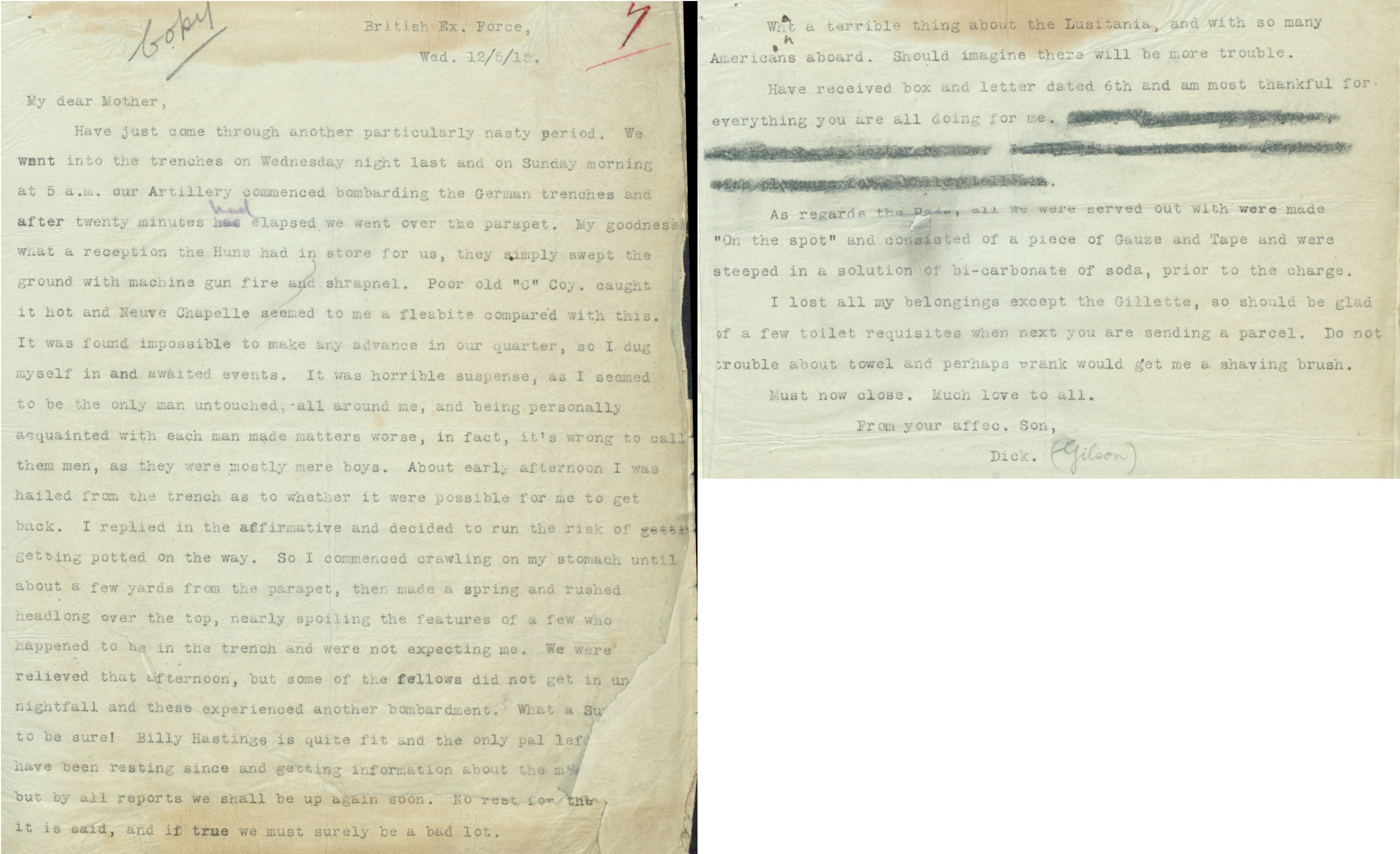 This is one of many letters sent by staff of the Great Western Railway Audit office at Paddington who had enlisted to fight in the First World War. It was sent to R. Gilson’s mother and it was typed up so his fellow workers could read it in the office at home. Gilson describes a bombardment and anti-gas equipment, (Catalogue ref: RAIL 253/516)

Have just come through a particularly nasty period. We went into the trenches on Wednesday night and on Sunday morning at 5am our Artillery commenced bombarding the German trenches and after 20 minutes had elapsed we went over the parapet. My goodness what a reception the Huns had in store for us, they simply swept the ground with machine gun fire and shrapnel. Poor old ‘C’ coy. caught it hot and Neuve Chapelle seemed to be a fleabite compared with this. It was found impossible to make any advance in our quarter, so I dug myself in and awaited events. It was horrible suspense, as I seemed to be the only man untouched, all around me, and being personally acquainted with each man made matters worse, in fact, it’s all wrong to call them men, as they were mostly mere boys.

About early afternoon I was hailed from the trench as to whether it was possible for me to get back. I replied in the affirmative and decided to run the risk of getting potted on the way. So I commenced crawling on my stomach until about a few yards from the parapet, then made a spring and rushed headlong over the top, nearly spoiling the features of a few who happened to be in the trench and were not expecting me. We were relieved that afternoon, but some of the fellows did not get in until nightfall and these experienced another bombardment… Billy Hastings is quite fit and the only pal left. We have been resting since and getting information about the (illegible) but by all reports we shall be up again soon. No rest for the wicked it is said, and if true we must surely be a bad lot.

What a terrible thing about the Lusitania, and with so many Americans aboard. Should imagine there will be more trouble. Have received box and letter dated 6th and am most thankful for everything you are all doing for me. (censored.)

As regards the pads, (masks of cotton pads which served as gas masks), all we were served out with were made ‘on the spot’ and consisted of a piece of gauze and tape and were steeped in a solution of bicarbonate of soda, prior to this charge. I lost all my belongings except the Gillette (razor) so should be glad of a few toilet requisites when next you are sending a parcel. Do not trouble about towel and perhaps Frank would get me a shaving brush. Must now close. Much love to all. From your affectionate son,