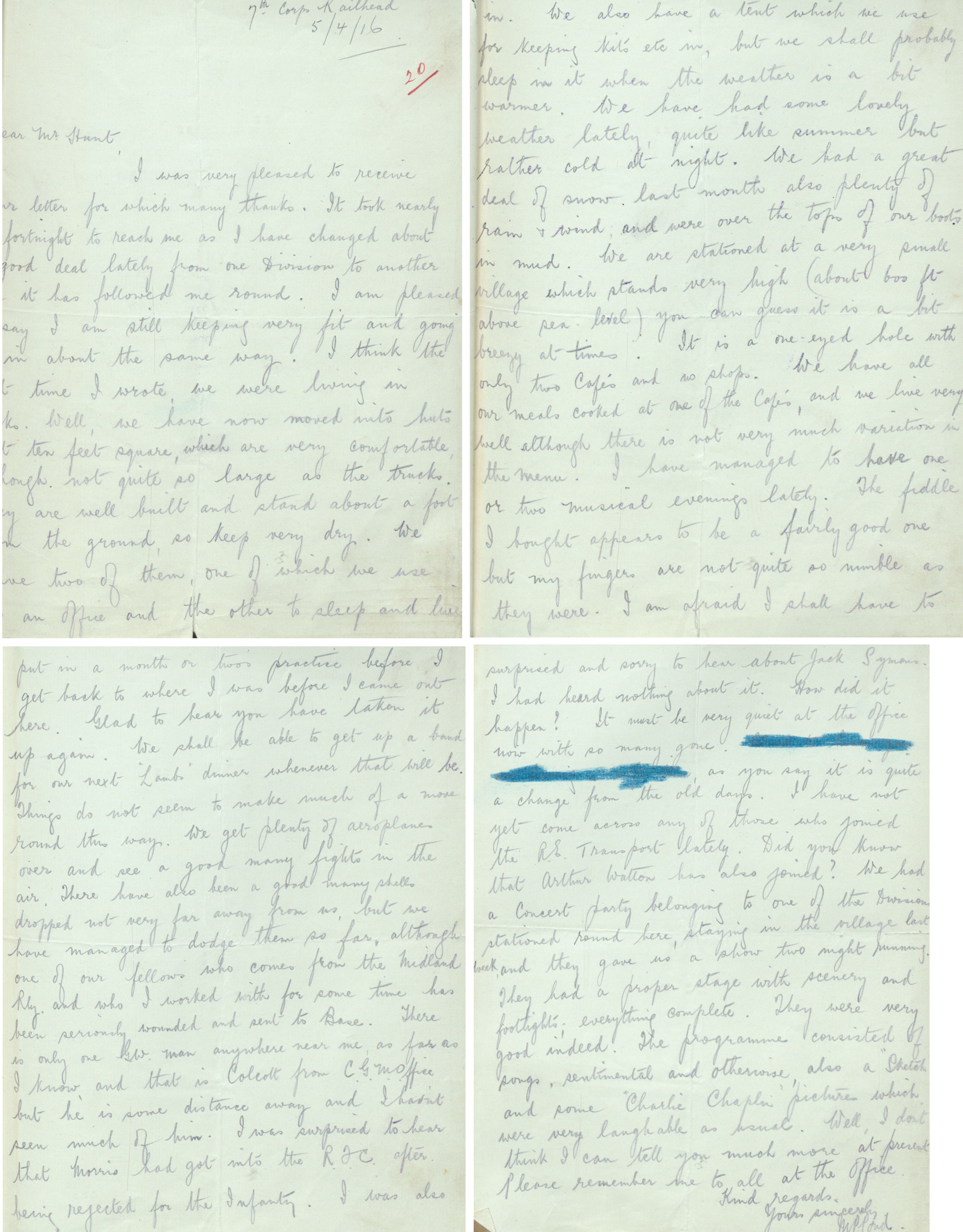 I was very pleased to receive your letter for which many thanks. It took nearly a fortnight to reach me as I have changed about a good deal lately from one division to another and it has followed me around. I am pleased to say I am still keeping very fit and going on in about the same way. I think the last time I wrote we were living in trucks. Well we have now moved into huts about ten feet square, which are very comfortable although not quite as large as the trucks. They are well built and stand about a foot from the ground so keep very dry. We have two of them, one which we use as an office and the other to sleep and live in. We also have a tent which we use for keeping kits etc. in, but we shall probably sleep in it when the weather is a bit warmer.

We have had some lovely weather lately, quite like summer but rather cold at night. We had a great deal of snow last month also plenty of rain and wind, and were over the tops of our boots in mud. We are stationed at a very small village which stands very high (about 600 feet above sea level) you can guess it is a bit breezy at times. It is a one-eyed hole with only two cafes and no shops. We have all our meals cooked at one of the cafes, and we live very well although there is not very much variation in the menu. I have managed to have one or two musical evenings lately. The fiddle I bought appears to be a fairly good one but my fingers are not quite so nimble as they were. I am afraid I shall have to put in a month or two’s practice before I get back to where I was before I came out here. Glad to hear you have taken it up again. We shall be able to get a band for our next ‘lamb’ dinner whenever that will be.

Things do not seem to make much of a move round this way. We get plenty of aeroplanes over and see a good many fights in the air. There have also been a good many shells dropped not very far away from us, but we have managed to dodge them so far although, one of our fellows, who comes from the Midland Railway and who I worked with for some time, has been wounded and sent to base. There is only one G.W. man anywhere near me as far as I know and that is Colcott from Chief Goods Manager’s Office but he is some distance away and I hadn’t seen much of him. I was surprised to hear that Morris had gone into the R.F.C. (Royal Flying Corps) after being rejected for the Infantry. I was also surprised and sorry to hear about Jack Symons. I had heard nothing about it. How did it happen? It must be very quiet at the office now with so many gone. (Censored line). As you say it is quite a change from the old days. I have not yet come across any of those who joined the R.E. (Royal Engineers) Transport lately. Did you know that Arthur Watton has joined?

We had a concert party belonging to one of the divisions stationed round here, staying in the village last week, and they gave us a show two nights running. They had a proper stage with scenery and footlights, everything complete. They were very good indeed. The programme consisted of songs, sentimental and otherwise, also a ‘Sketch’ and some Charlie Chaplin pictures which were very laughable as usual. Well, I don’t think I can tell you much more at present. Please remember me to all at the office.