India: ‘bowled over with fever’ 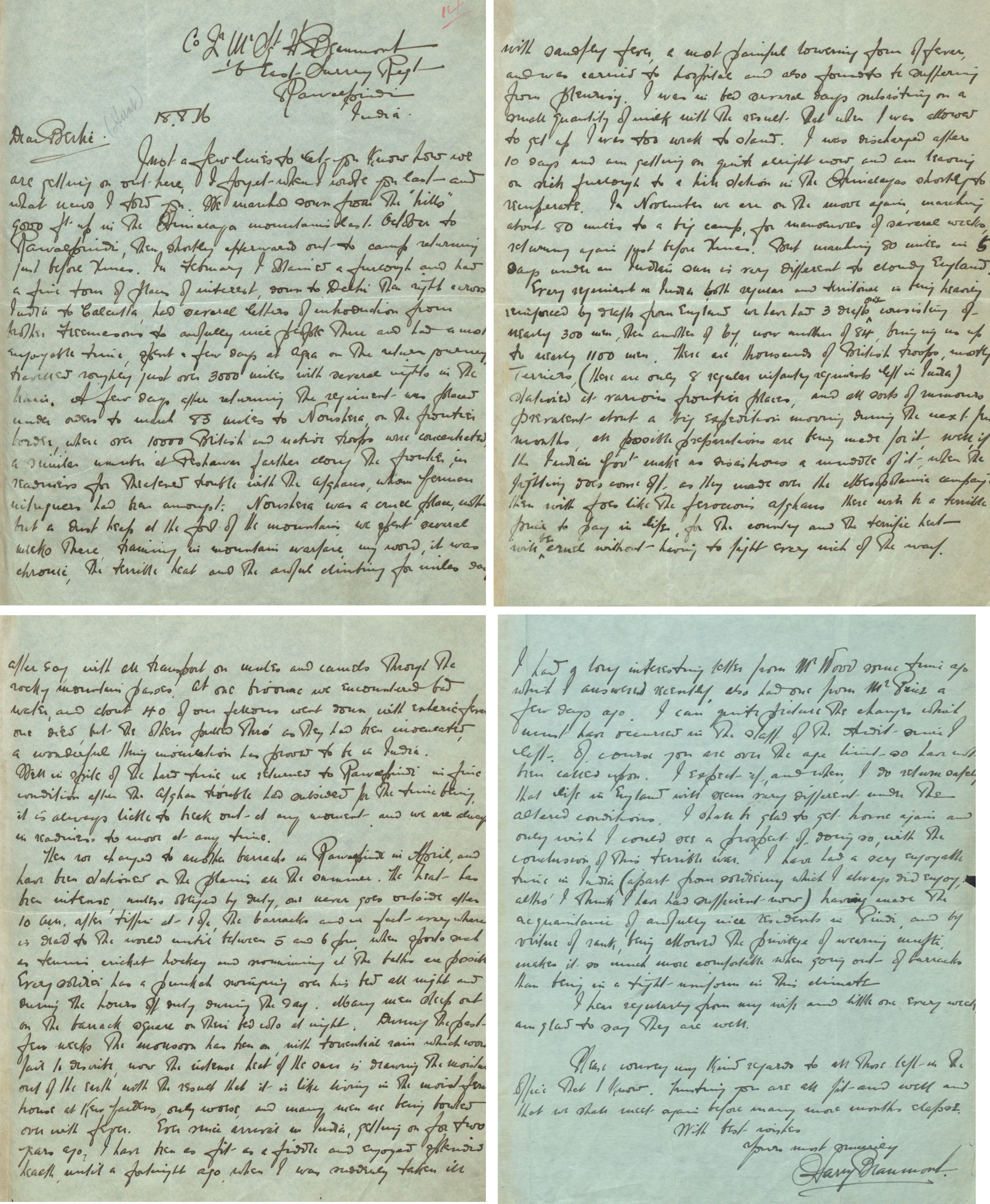 Note: He was a member of volunteer army as a young man. He was a life governor of Richmond Hospital, London and held an MBE (Military Division).

Just a few lines to let you know how we are getting on out here, I forgot when I last wrote you last and what news I told you. We marched down from the hills, 9,000 feet up in the Himalaya Mountains last October to Rawalpindi, then shortly afterwards out to camp returning just before Xmas. In February I obtained a furlough and had a fine tour of places of interest, down to Delhi then right across India to Calcutta, had several letters of introduction from brother Freemasons to awfully nice people there and had a most enjoyable time, spent a few days at Agra on the return journey, travelled roughly just over 3,000 miles with several nights in the train. A few days after returning the regiment was placed under orders to march 83 miles to Noushera on the frontier border, where over 10,000 British and native troops were concentrated, a similar number at Peshawar farther down the frontier, in readiness for threatened trouble with the Afghans, whom German intriguers had been amongst. Noushera was a cruel place, nothing but a dust heap at the foot of the mountain. We spent several weeks there, training in mountain warfare, my word, it was chronic, the terrific heat and the awful climbing for miles day after day, with all transport on mules and camels through the rocky mountain passes. At one bivouac we encountered bad water, and about forty of our fellows went down with enteric fever [typhoid]. One died, but the others pulled through as they had been inoculated; a wonderful thing inoculation has proved to be in India.

Well in spite of the hard time, we returned to Rawalpindi in fine condition after the Afghan trouble had subsided for the time being, it is always liable to break out at any moment and we are always in readiness to move at any time.

Then we changed to another barracks in Rawalpindi in April, and have been stationed on the plains all the summer. The heat has been intense; one never goes outside after 10am; after tiffin at 1 o’clock the barracks and in fact everywhere is dead to the world until between 5 and 6pm, when sports such as tennis, cricket hockey and swimming at the baths are possible.

Every soldier has a punkah (fan) swinging over his bed all night and during the hours off duty during the day. Many men sleep out on the barrack square on their beds at night. During the past few weeks the monsoon has been on, with torrential rain which I would fail to describe. Now the intense heat of the sun is draining the moisture out of the earth with the result that it is like living in the moist fern house at Kew Gardens, only worse, and many men are being bowled over with fever. Ever since arriving at India, getting on for two years ago, I have been as fit as a fiddle and enjoyed exceptional health, until a fortnight ago, when I was suddenly taken ill with sandfly fever, a most painful, lowering form of fever, and was carried to hospital and also found to be suffering from pleurisy. I was in bed several days subsisting on a small quantity of milk with the result that when I was allowed to get up I was too weak to stand. I was discharged after ten days and am getting on quite alright now, and am leaving on next furlough to a hill station in the Himalayas shortly to recuperate. In November we are on the move again, marching about 80 miles to a big camp, for manoeuvres of several weeks, returning again just before Christmas. But marching eighty miles in five days under an Indian sun is very different to cloudy England. Every regiment in India, both regular and territorial, is being heavily reinforced by drafts from England. We have had three drafts one consisting of nearly 300 men, then another of 67, now another of 84, bringing us up to nearly 1,100 men. There are thousands of British troops, mostly Terriers (members of the Territorial army) (there are only eight regular infantry regiments left in India) stationed at various frontier places, and all sorts of rumours prevalent about a big expedition moving during the next few months, all possible preparations are being made for it, well, if the Indian govt. make as disastrous a muddle of it when the fighting does come off as they made over the Mesopotamia campaign, then with foes like the ferocious Afghans there will be a terrible price to pay in life, for the country and the terrific heat will be enough without having to fight every inch of the way.

I had a very interesting letter from Mr Wood some time ago which I answered recently, also had one from Mr Price a few days ago. I can quite picture the changes which must have occurred in the staff of the Audit since I left. Of course you are over the age limit, so have not been called upon. I expect if, and when, I do return safely that life in England will seem very different under the altered conditions. I shall be glad to get home again and only wish I could see a prospect of doing so, with the conclusion of this terrible war. I have had a very enjoyable time in India (apart from soldiering which I always did enjoy, although I think I have had sufficient now) having made the acquaintance of awfully nice residents in ‘Pindi, and by virtue of rank, being allowed the privilege of wearing mufti makes it so much more comfortable when going out of barracks than being in a tight uniform in the climate.

I hear regularly from my wife and little one every week. Am glad to say they are well.

Please convey my kind regards to all those left in the office that I know. Trusting you are all fit and well and that we shall meet again before many more months elapse.