Convalescence: ‘wounded by a bomb’ 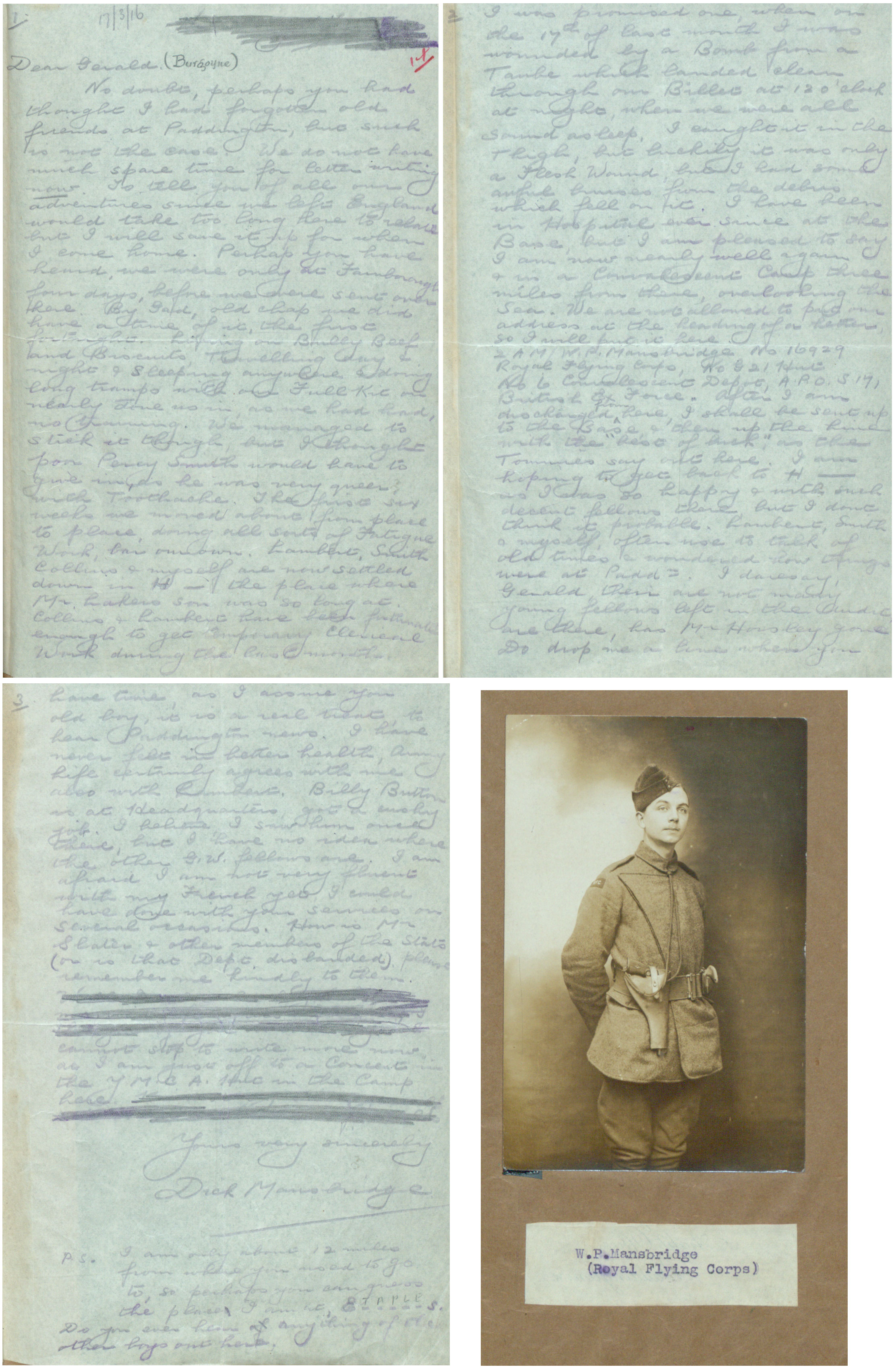 No doubt, perhaps you had thought I had forgotten old friends at Paddington, but such is not the case. We so not have much spare time for letter writing now. To tell you of all our adventures since we left England would take too long here to relate but I will save for when I come home. Perhaps you have heard, we were only at Farnborough four days, before we were sent over there. By God, old chap we did have a time of it, the first fortnight. Living on bully beef and biscuits, travelling day and night and sleeping anywhere and doing long tramps with full kit on nearly done us in as we had no training. We managed to stick it through, but I thought poor Percy Smith would have to give in as he was very queer with toothache. The first six weeks we moved about from place to place doing all sorts of fatigue work, bar our own. Lambert, Smith, Collins and myself are now settled down in H— the place where Mr Laker’s son was so long at. Collins and Lambert have been fortunate enough to get temporary clerical work during the last months.

I was promised one when on the 17th of last month I was wounded by a bomb from a taube which landed clean through our billet at 12 o’clock at night, when we were all sound asleep. I caught it in the thigh, but luckily it was only a flesh wound, but I had some awful bruises from the debris which fell on it. I have been in hospital ever since at the base, but I am pleased to say I am now nearly well again and in a convalescent camp three miles from there, overlooking the sea. We are not allowed to put our address at the heading of a letter so I will put it here:

2AM /W.P. Mansbridge No.16929, Royal Flying Corps No. G 21 Hut no. 6 Convalescent Depot, A.P.O. S.17, British Expeditionary Force. After I am discharged from here, I shall be sent up to the base and then up the line with the “best of luck” as the Tommies say out here. I am hoping to get back to H— as I was so happy and with such decent fellows there, but I don’t think it probable. Lambert, Smith and myself, often used to talk of old times and wondered how things were at Paddington. I daresay Gerald, there are not many young fellows left in the Audit are there, has Mr Horsley gone? Do drop me a line when you have time, as I assure you old boy, it is a real treat to hear Paddington news. I have never felt in better health, army life certainly agrees with me also with Lambert. Billy Button is at headquarters, got a cushy job. I believe I saw him once there, but I have no idea where the other G.W. fellows are. I am afraid I am not very fluent with my French yet, I could have done with your services on several occasions. How are Mr Slater and other members of the Stats. (or is that department disbanded?) Please remember kindly to them. (Lines censored)

Cannot stop to write more now as I am just off to a concert in the Y.M.C.A. hut in the camp here. (Lines censored)