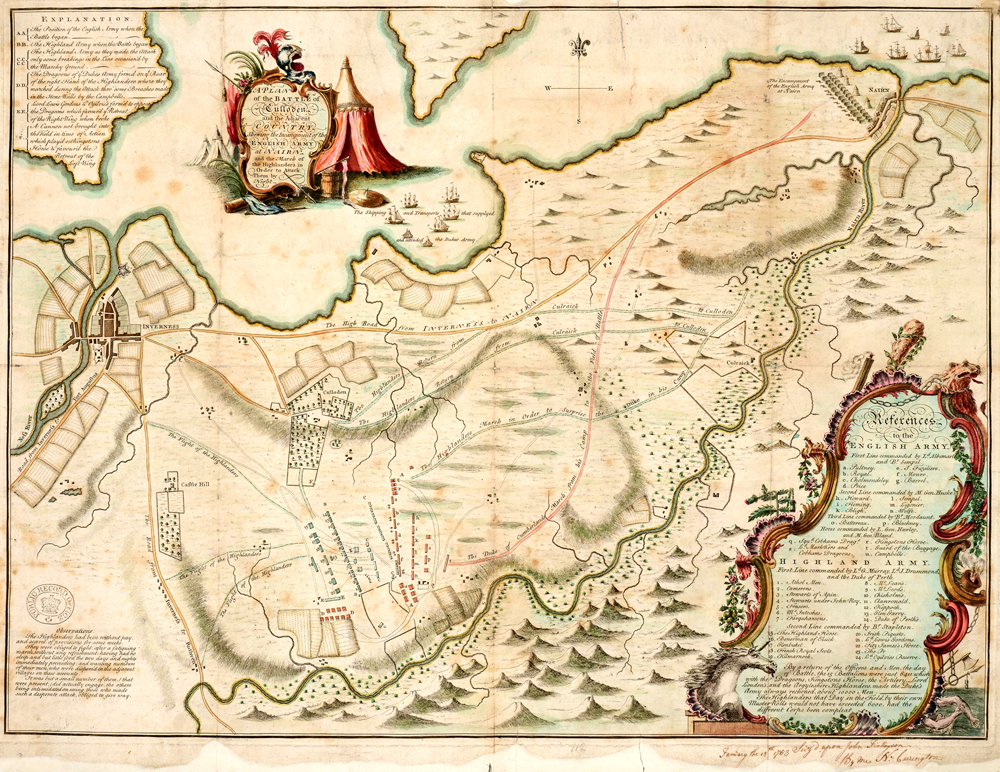 Battle plan of Culloden, 1753.  At the battle of Culloden, the Hanoverian army led by the Duke of Cumberland, son of King George II, defeated the much smaller army of Lord John Murray and Prince Charles Edward Stuart. It was the last of the Jacobite rebellions. Jacobite swords and daggers were no contest for Hanoverian cannon and guns. Charles Edward Stuart chose not to re-group his forces and fled abroad. Cumberland was determined to finally dismiss the Jacobite threat. Anyone suspected of Jacobite sympathies was punished and laws were made to crush the power of the clans. (MPF 1/1).

A. A: The Position of the English Army when the Battle began.

B. B: The Highland army when the Battle began

C. C: The Highland Army as they made the attack

C. C: only some breakings in the Line occasion’d by the marshy Ground.

D. D: The Dragoons of the Dukes army formed on [the] Rear of the right Flank of   the Highlanders where they marched during the attack thro’ some Breaches made in the Stone Walls by the Campbells.

E.E:  the Dragoons which favour’d [the] Retreat of the Right Wing when broke

F:      A Cannon not brought into the Field in time of Action which play’d on Kingstons Horse & favour’d the Retreat of the Left Wing

Shewing the Incampment of the ENGLISH ARMY at NAIRN, and the March of the Highlanders in Order to Attack Them by Night.

The Highlanders had been without pay, and scarce of provisions [food supplies] for some weeks.

They were obliged to fight after a fatiguing march, without any refreshment: having had no sleep and but little food the two days and nights immediately preceeding: and wanting numbers of their men, who were dispers’d in the adjacent [nearby] villages on these accounts.

It was but a small number of them that were present. I did actually engage the others being intimidated [frightened] on seeing those who made such a desperate attack, obliged to give way.

References to the ENGLISH ARMY

t. Guard of the Baggage.

By a return of the Officers and Men, the day of Battle, the 15 Battalions were just 6411: which with the Dragoons, Kingston’s Horse, Artillery, Lord Louden’s, and the Argyleshire Highlanders, made the Duke’s army always reckoned, about 10000 Men.

The Highlanders that Day in the Field, by their own Muster Rolls would not have exceeded 6000, had the different Corps been compleat.