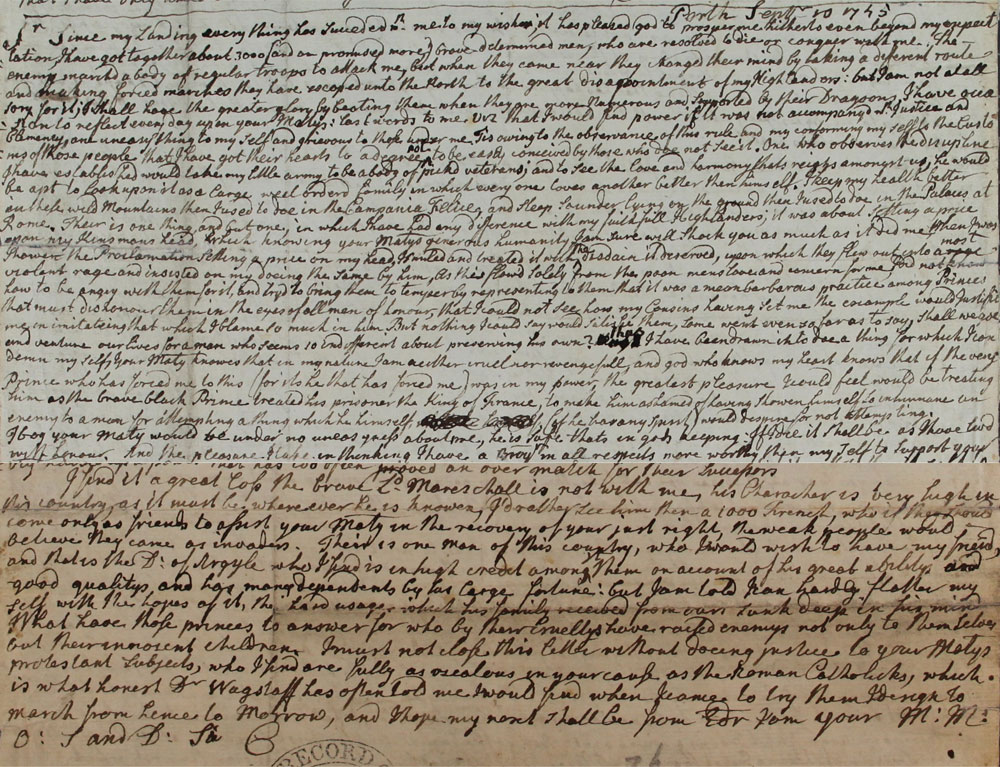 Sir, since my landing everything has succeeded to meet my wishes, it has pleased God to prosper me hitherto even beyond my expectation, I have got together about 3000 (and am promised more), brave and determined men who are resolved to die or conquer with me. The enemy marched a body of regular troops to attack me but when they came near they changed their mind by taking a different route and making forced marches they have escaped into the north to the great disappointment of my highlanders: but I am not at all sorry for it, I shall have the greater glory by beating them when they are more numerous and supported by their dragoons. I have occasion to reflect every day upon your majesty’s last words to me, viz [namely] that I would find power if it was not accompanied with justice and clemency, one uneasy thing to myself and grievous to those under me. ‘Tis [It is] owing to the observance of this rule and my conforming myself to the customs of those people that I have got their hearts to a degree not to be easily conceived by those who do not see it. One who observes the discipline I have established would take my little army to be a body of picked veterans; and to see the love and harmony that reigns amongst us, he would be apt to look upon it as a large well-ordered family in which everyone loves another better than himself. I keep my health better in these wild mountains than I used to do, in the campanie felice [happy company], and sleep sounder lying on the ground than I used to do in the palaces at Rome. There is one thing and but one, in which I have had any difference with my faithful highlanders, it was about setting a price upon my kinsman’s head, which knowing your majesty’s generous humanity I am sure will shock you are much as it did me, when I was shown the proclamation setting a price on my head. I smiled and treated it with the distain it deserved, upon which they flew out into a most violent rage and insisted on my doing the same by him as this flowed solely from the poor men’s love and concern for me I did not know how to be angry with them for it, but tried to bring them to temper by representing to them that it was a mean and barbarous practice among princes that must dishonour them in the eyes of all men of honour, that I could not see how my cousin having set me the example would justify me in imitating that which I blame so much in him. But nothing I could say would satisfy them, some went even so far as to say, shall we go and venture our lives for a man who seems so indifferent about preserving his own? Thus I have been drawn in to do a thing for which I can damn myself. Your majesty knows that in my nature I am neither cruel or revengeful and God who knows my heart knows that if the very prince who has forced me to this (for it is he that has forced me) was in my power, the greatest pleasure I could feel would be treating him as the brave, black Prince treated his prisoner, the king of France, to make him ashamed of having shown himself so inhumane an enemy to a man for attempting a thing which he himself if he has any [sincerity] would despise for not attempting. I beg your majesty would be under no uneasiness about me, he is safe that’s in God’s keeping: if I die it shall be as I have lived, with honour.

I find it a great loss the brave Lord Marischal is not with me, his character is very high in this country, as it must be wherever he is known, I’d rather see him than 1000 French, who if they should come only as friends to assist your majesty in the recovery of your just right, the weak people would believe they came as invaders. There is one man of this country, who I would wish to have my friend, and that is the duke of Argyll who I find is in high credit among them on account of his great ability and good qualities and had many dependants by his large fortune: but I am told I can hardly flatter myself with the hopes of it, the hard usage which his family received from ours sunk deep in his mind. What have those princes to answer for who by their cruelty have raised enemies not only to themselves but their innocent children, I must not close this letter without doing justice to your majesty’s Protestant subjects, who I find are fully as zealous in your cause as the Roman Catholics, which is what honest Dr Wagstaff has often told me I would find when I can to try them. I design to march from hence tomorrow and I hope my next shall be from Edinburgh. [Charles Edward Stuart].