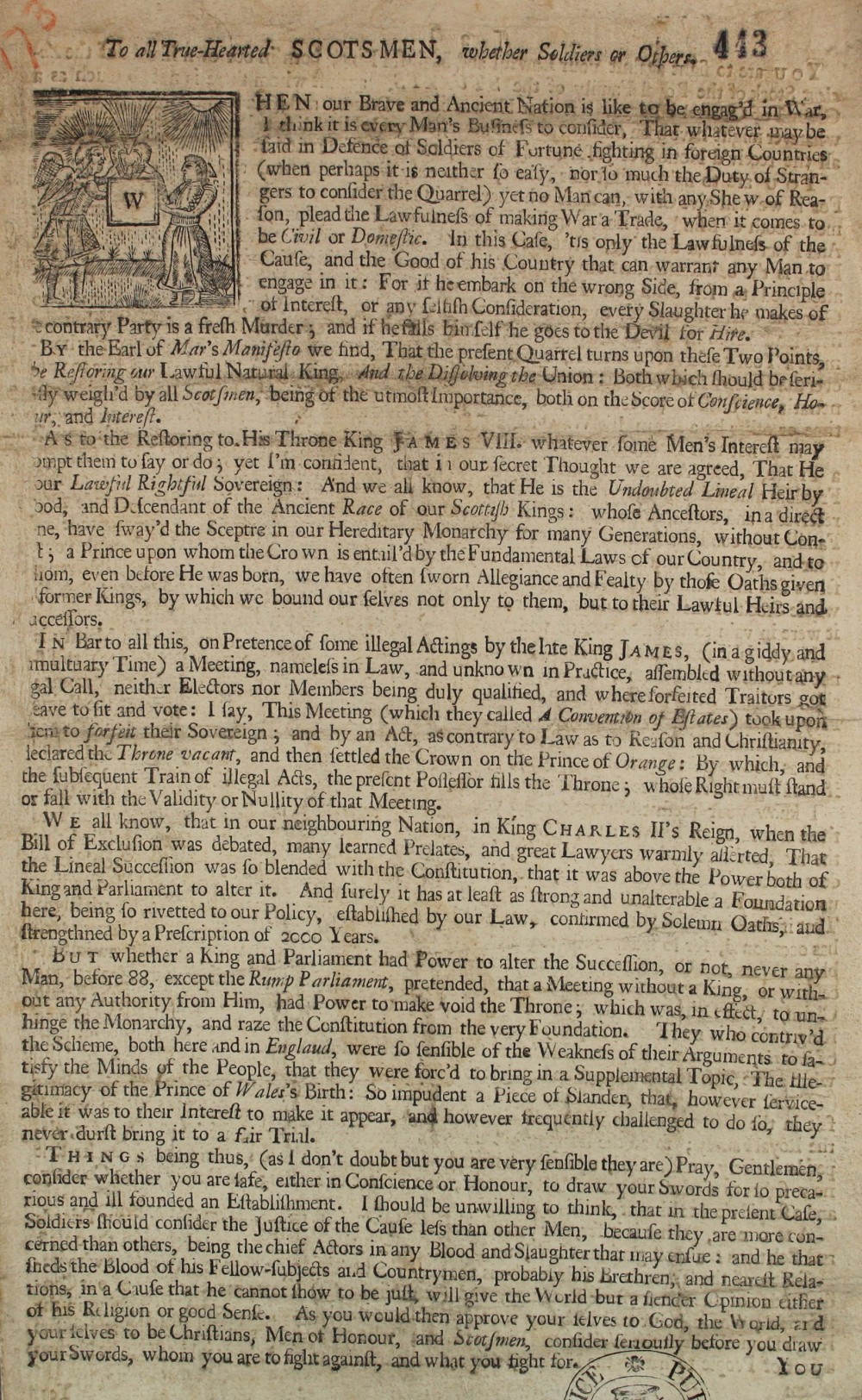 A handbill addressed ‘to all true-hearted Scotsmen’ to restore James Francis Edward, James VIII, to the throne of England, 1 January 1715. The leaflet says that rebellion is justified because James VIII is the true heir to the throne and men need to consider the justice of taking up arms very carefully. (SP 54/10/173).

To all True-Hearted SCOTSMEN, whether Soldiers or Others.

When our Brave and Ancient Nation is like to be engag’d in War, I think it is every Man’s Business to consider, That whatever may be said in Defence of Soldiers of Fortune fighting in foreign Countries (when perhaps it is neither so easy, nor so much the Duty of Strangers to consider the Quarrel) yet no Man can, with any Shew of Reason, plead the Lawfulness of making War a Trade, when it comes to be Civil or Domestic. In this Case, ‘tis only the Lawfulness of the Cause, and the Good of his Country that can warrant any Man to engage in it: For if he embark on the wrong Side, from a Principle of Interest, or any selfish Consideration, every Slaughter he makes of a contrary Party is a fresh Murder; and if he falls himself he goes to the Devil for Hire.

By the Earl of Mar’s Manifesto we find, That the present Quarrel turns upon these Two Points, be Restoring our Lawful Natural King. And the Dissolving the Union: Both which should be [seriously] weigh’d by all Scotsmen, being of the utmost Importance, both on the Score of Conscience, Hour, and Interest.

As to the Restoring to His Throne King JAMES VIII. Whatever some Men’s Interest may [prompt] them to say or do; yet I’m confident, that in our secret Thought we are agreed, That He our Lawful Rightful Sovereign: And we all know, that He is the Undoubted Lineal Heir by [blood] and Descendant of the Ancient Race of our Scottish Kings: whose Ancestors, in a direct [line], have sway’d the Sceptre in our Hereditary Monarchy for many Generations, without Cont.; a Prince upon whom the Crown is entail’d [tied] by the Fundamental Laws of our Country, and to whom, even before He was born, we have often sworn Allegiance and Fealty by those Oaths given former Kings, by which we bound our selves not only to them, but to their Lawful Heirs and accessors.

IN Bar to all this, on Pretence of some illegal Actings by the late King JAMES, (in a giddy and tumultuary [lawless] Time) a Meeting, nameless in Law, and unknown in Practice, assembled without any [legal] Call, neither Electors nor Members being duly qualified, and where forfeited Traitors got [leave] to sit and vote: I say, This Meeting (which they called A Convention of Estates) took upon [them] to forfeit [give up] their Sovereign; and by an Act, as contrary to Law as to Reason and Christianity, [declared] the Throne vacant, and then settled the Crown on the Prince of Orange [William of Orange]: By which, and the subsequent Train of illegal Acts, the present Possessor fills the Throne; whose Right must stand or fall with the Validity or Nullity [lack of legal right] of that Meeting.

WE all know, that in our neighbouring Nation [England], in King CHARLES II’s Reign, when the Bill of Exclusion [plan to exclude Charles II’s brother, James, Duke of York from the throne, as he was a Catholic] was debated, many learned Prelates [churchmen], and great Lawyers warmly asserted [declared], That the Lineal Succession was so blended with the Constitution, that it was above the Power both of King and Parliament to alter it. And surely it has at least as strong and unalterable a Foundation here, being so riveted [bound] to our Policy, established by our Law, confirmed by Solemn Oaths, and strengthened by a Prescription [history] of 2000 years.

BUT whether a King and Parliament had Power to alter the Succession, or not, never any Man, before [1688], except the Rump Parliament, pretended, that a Meeting without a King, or without any Authority from Him, had Power to make void the Throne [decide who would be king]; which was, in effect, to unhinge the Monarchy, and raze [bring down] the Constitution [rules of the country] from the very Foundation [core]. They who contriv’d [thought up] the Scheme, both here and in England, were so sensible of the Weakness of their Arguments to satisfy the Minds of the People, that they were forc’d to bring in a Supplemental Topic [an extra argument], The illegitimacy of the Prince of Wales’s Birth [suggestion here that that Charles Francis Edward was not the true son of James II-hence call him the “Old Pretender”] So impudent [outrageous] a Piece of Slander, that, however serviceable it was to their Interest to make it appear, and however frequently challenged to do so, they never durst bring it to a fair Trial.

THINGS being thus, (as I don’t doubt but you are very sensible they are) Pray, Gentlemen, consider whether you are safe, either in Conscience or Honour, to draw your Swords for so precarious and ill founded an Establishment. I should be unwilling to think, that in the present Case, Soldiers should consider the Justice of the Cause less than other Men, because they are more concerned than others, being the chief Actors in any Blood and Slaughter that may ensue: and he that sheds the Blood of his Fellow-subjects and Countrymen, probably his Brethren [brothers], and nearest Relations, in a Cause that he cannot show to be just, will give the World but a slender Opinion either of his Religion or good Sense. As you would then approve your selves to God, the World, and your selves to be Christians, Men of Honour, and Scotsmen, consider seriously before you draw your Swords [take up arms], whom you are to fight against, and what you fight for.