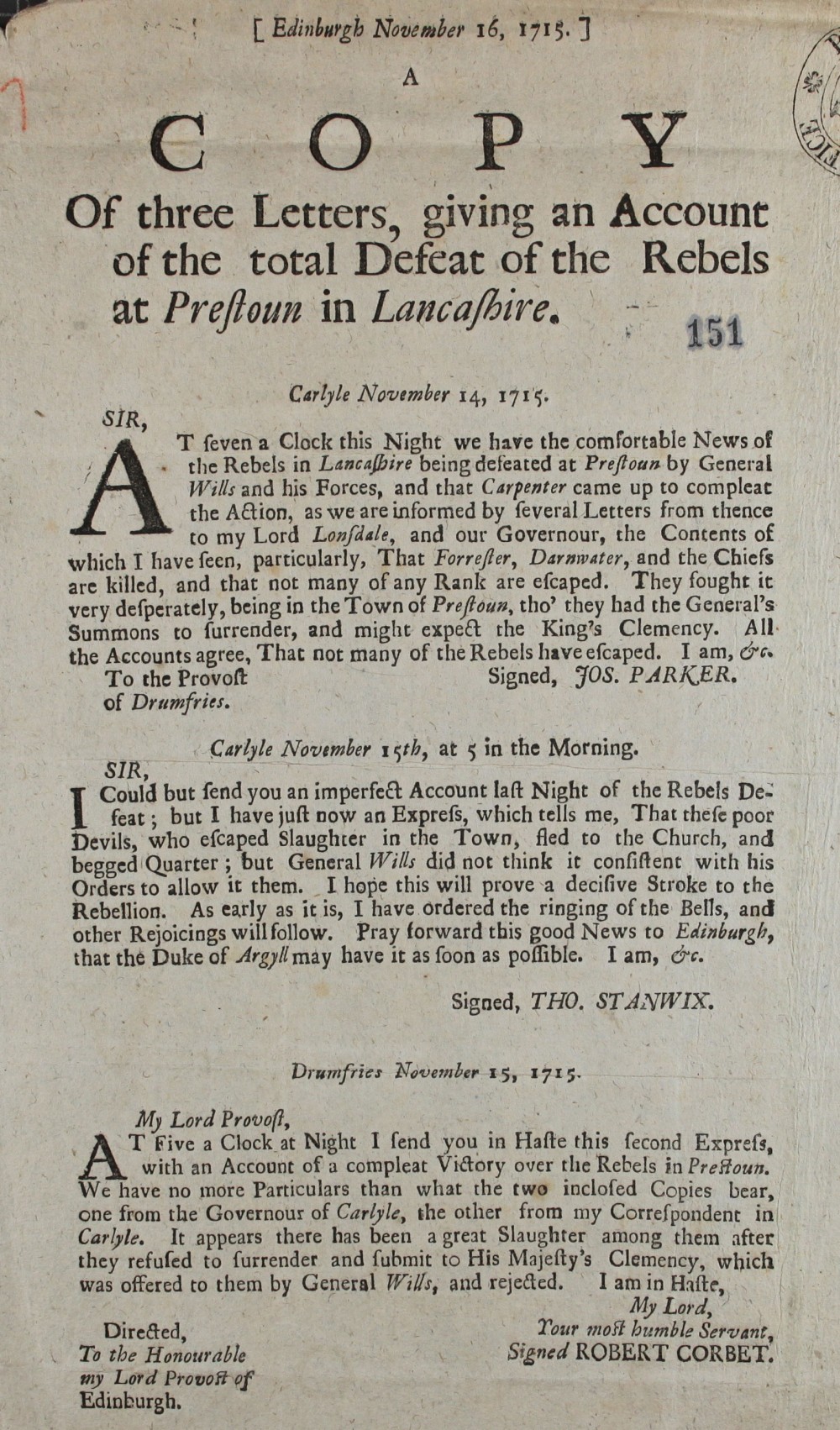 A pamphlet giving three accounts of the defeat of the Jacobites in Preston, Lancashire. The Jacobites had marched into England hoping for support from Catholics in Lancashire, but their forces were surrounded at Preston which ended the rising in England. Over 150 rebels were taken prisoner. (SP 54/10/57).

[Edinburgh November 16, 1715.]
A
COPY
Of three Letters, giving an Account of the total Defeat of the Rebels at Prestoun in Lancashire.
Carlyle November 14, 1715.
SIR,
AT seven a Clock this Night we have the comfortable News of the Rebels in Lancashire being defeated at Prestoun [Preston] by General Wills and his Forces, and that Carpenter [General Carpenter] came up to compleat the Action, as we are informed by several Letters from thence to my Lord Lonsdale, and our Governour, the Contents of which I have seen, particularly, That Forrester [Forster], Darnwater  [Derwentwater], and the Chiefs are killed, and that not many of any Rank are escaped. They fought it very desperately, being in the Town of Prestoun, tho’ they had the General’s Summons to surrender, and might expect the King’s Clemency [mercy]. All the Accounts agree,That not many of the Rebels have escaped. I am, &c.

Carlyle November 15th, at 5 in the Morning.
SIR,
I could but send you an imperfect Account last Night of the Rebels Defeat; but I have just now an Express, which tells me, That these poor Devils, who escaped Slaughter in the Town, fled to the Church, and begged Quarter [lodgings]; but General Wills did not think it consistent with his Orders to allow it them. I hope this will prove a decisive Stroke to the Rebellion. As early as it is, I have ordered the ringing of the Bells, and other Rejoicings will follow. Pray forward this good News to Edinburgh, that the Duke of Argyll may have it as soon as possible. I am, &c.
Signed, [Thomas] STANWIX.

Drumfries November 15, 1715.
My Lord Provost,
AT Five a Clock at Night I send you in Haste this second Express, with an Account of a compleat Victory over the Rebels in Prestoun. We have no more Particulars [details] than what the two inclosed Copies bear, one from the Governour of Carlyle, the other from my Correspondent in Carlyle. It appears there has been a great Slaughter [bloodshed] among them after they refused to surrender and submit to His Majesty’s Clemency, which was offered to them by General Wills, and rejected. I am in Haste,
My Lord,   Your most humble Servant,
Signed ROBERT CORBET.
Directed, To the Honourable
My Lord Provost of Edinburgh.