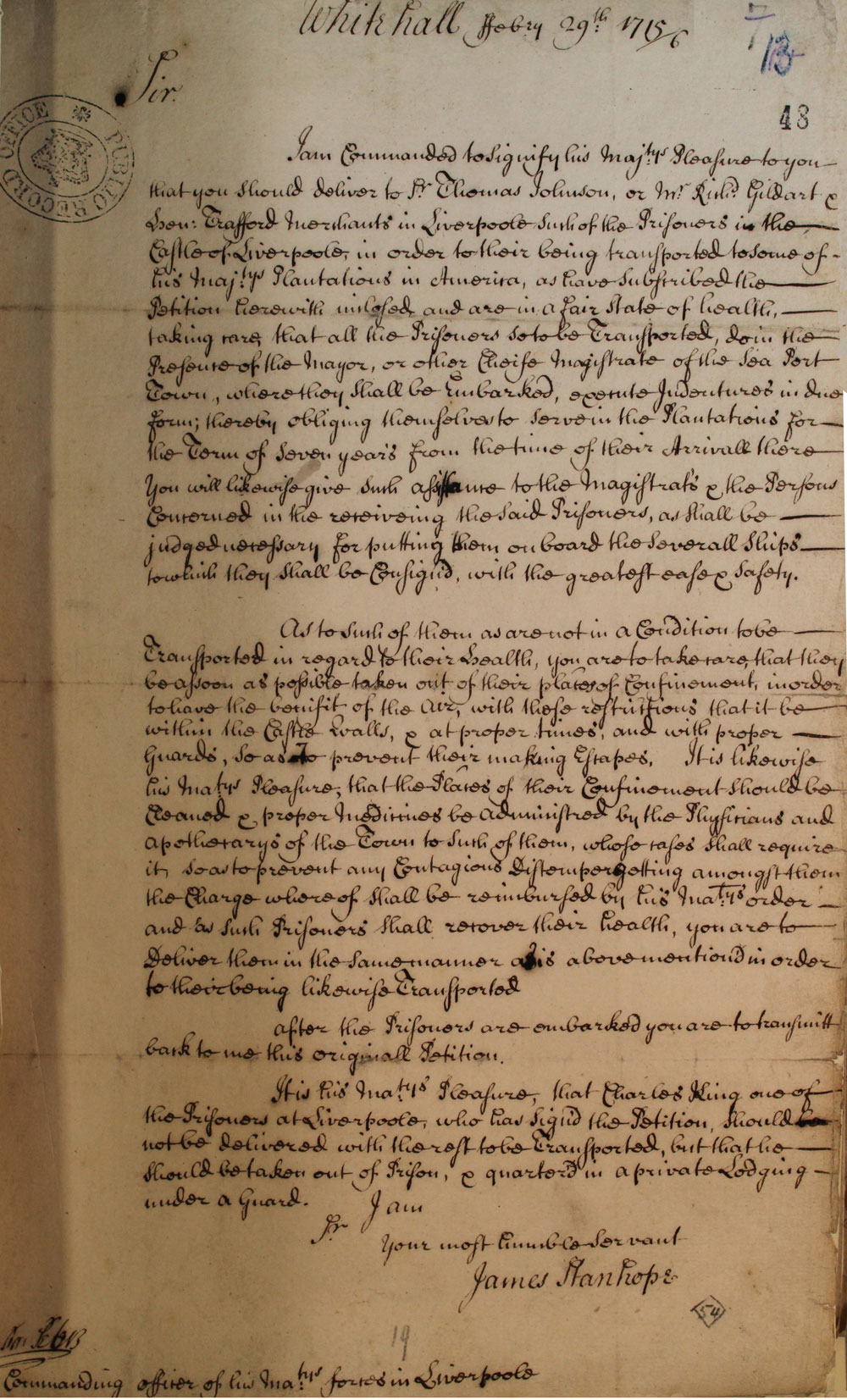 A letter written by James Stanhope at Whitehall to the Commanding Officer of his Majesty’s Forces in Liverpool. It gives orders for the transportation of Jacobite prisoners in Liverpool Castle to plantations in America and provides instructions for the care of sick prisoners, 29 February 1716 (SP 35/5/13).

I am commanded to signify [show] his Majesty’s pleasure to you that you should deliver to Sir Thomas Johnson, or Mr. Richard Gildart & Son: Trafford Merchants in Liverpoole such of the Prisoners in the Castle of Liverpoole , in order to their being transported to some of his Majesty’s Plantations in America, as have subscribed [signed] the Petition inclosed and are in a fair state of health- taking care that all the Prisoners so to be transported, do in the [presence] of the Mayor, or other Cheife Magistrate of the Sea Port Town, where they shall be embarked [taken on board], execute Judicature [hold trials] in due form; thereby obliging themselves to serve in the Plantations for the term of Seven years from the time of their Arrivall there. You will likewise give such assurance to the magistrates & the Persons concerned in the receiving the said prisoners, as shall be judged necessary for putting them on board the severall ships to which they shall be consign’d with the greatest case of safety.

As such of them as are not in a condition to be transported in regard to their health, you are to take care that they be as soon as possible taken out of their places of confinement in order to have the benefit of the air, with these restrictions that it be within the castle walls & at proper times, and with proper Guards, so as to prevent their making Escapes. It is likewise his Majesty’s Pleasure, that the Places of their Confinement [prison cells] should be cleaned & proper medicines be administered [given] by the Physicians [doctors]and apothecarys [chemists] of the Town to such of them, whose cases shall require it, so as to prevent any contagious Distemper [disease] getting amongst them the charge where of shall be reimbursed [paid] by his Majesty’s order and as such Prisoners shall recover their health, you are to Deliver them in the same manner as is above mentioned in order to their being likewise Transported.

After the Prisoners are embarked you are to transmit [send] back to me this originall Petition.

It is His Majesty’s Pleasure [wish], that Charles King one of the Prisoners at Liverpoole, who has sign’d the Petition, should not be delivered with the rest to be Transported, but that he should be taken out of Prison, & quartered in a private Lodging under a Guard.
I am

Sr.
Your most humble Servant,

James Stanhope
Commanding officer of his Majesty’s fortress in Liverpoole