Not an ‘un-natural rebellion’ 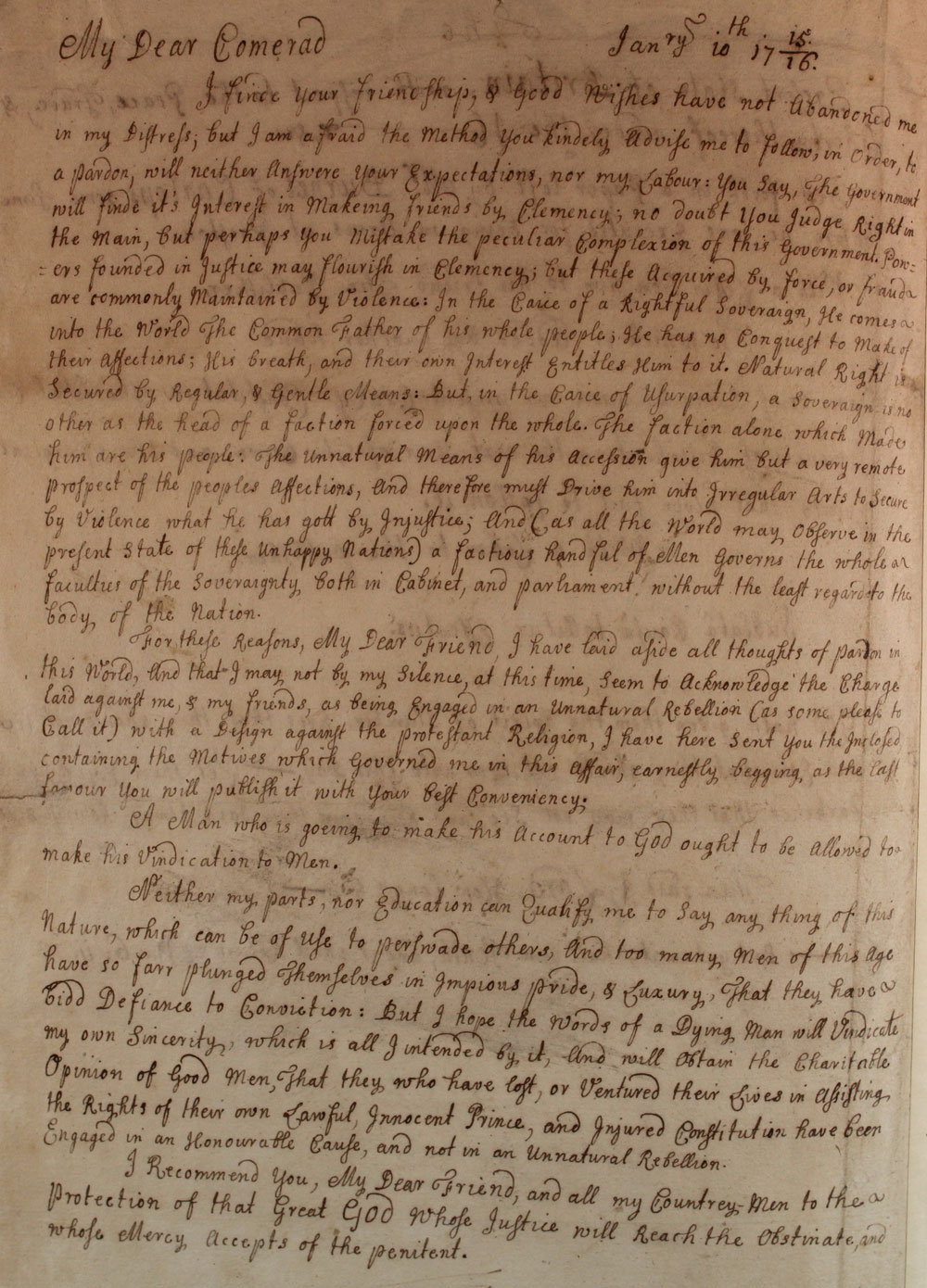 Extract from document left to a publisher by Mr Burnet of Carlops [village in Scottish borders area of Scotland] on ‘The Present State of Britain’, with respect to ‘the Peace, Trade, & Liberty’ before he was executed for having fought with the Jacobites at Preston. The author does not think he will be pardoned because the present king holds his throne illegally, so there is no chance for real justice. (SP 35/5 f3).

I find your friendship, & good wishes have not Abandoned me in my Distress, but I am afraid the method you kindely, Advise me to follow, in Order, to a pardon, will neither Answere your Expectations, nor my, Labour: You say, The Government will finde it’s Interest in Makeing friends by Clemency [mercy]; no doubt you judge Right in the Main, but perhaps you Mistake the peculiar complexion [nature] of this Government. Powers founded in Justice may flourish in Clemency. But these Acquired by Force, or fraud are commonly Maintained by Violence: In the case of a Rightful Sovereign, He comes into the world the Common Father of his whole people, he has no conquest to Make of their Affections; his breath, and their own interest Entitles Him to it. Natural Right is secured by Regular & Gentle Means: But in the case of Usurpation [where the throne has been stolen from the rightful claimant], a sovereign is no other as the head of a faction forced upon the Whole. The faction alone which made him are his people: The Unnatural Means of his Accession give him but a very remote prospect of the peoples affections, And therefore must Drive him into Irregular Arts [unfair means] to secure by violence what he has got by Injustice, And (as all the World may observe in the present state of these unhappy Nations) a factious handful of Men [a group divided by arguments] governs the whole as faculties of the Soverainty [the king] both in Cabinet, and Parliament without the least regards to the body of the Nation [state of the country].

For these Reasons, My Dear Friend, I have laid aside all thoughts of pardon in this World. And that I may not by my silence at this time, seem to Acknowledge the Charge laid against me & my friend, as being Engaged in an Unnatural Rebellion (as some please to Call it) with a Design against the protestant Religion, I have sent you the Inclosed containing the Motives which Governed me in this affair, earnestly, begging as the last favour you will publish it with your best Conveniency [convenience]

A Man who is goeing to make his Account to God ought to be allowed to make his Vindication [defence] to men.

Neither my parts, nor Education can Qualify me to say anything of this Nature, which can be of use to persuade others, And too many men of this Age have so far plunged Themselves in Impious [ungodly] pride, & Luxury, that they have bidd Defiance to Conviction [belief]: But I hope the Words of a dying man will Vindicate [prove] my own Sincerity, which is all I intended by it, And will obtain the Charitable Opinion of Good Men, That they, who have left or ventured their Lives in assisting the Rights of their own Lawful, Innocent Prince [Charles Francis Edward Stuart], and Injured Constitution have been Engaged in an Honourable Cause, and not in an Unnatural [unlawful] Rebellion .

I recommend you, My Dear Friend, and all my Countrey-men to the Protection of that God whose Justice will Reach the Obstinate [stubborn], and whose Mercy accepts of the penitent [those who express sorrow for wrongdoing].