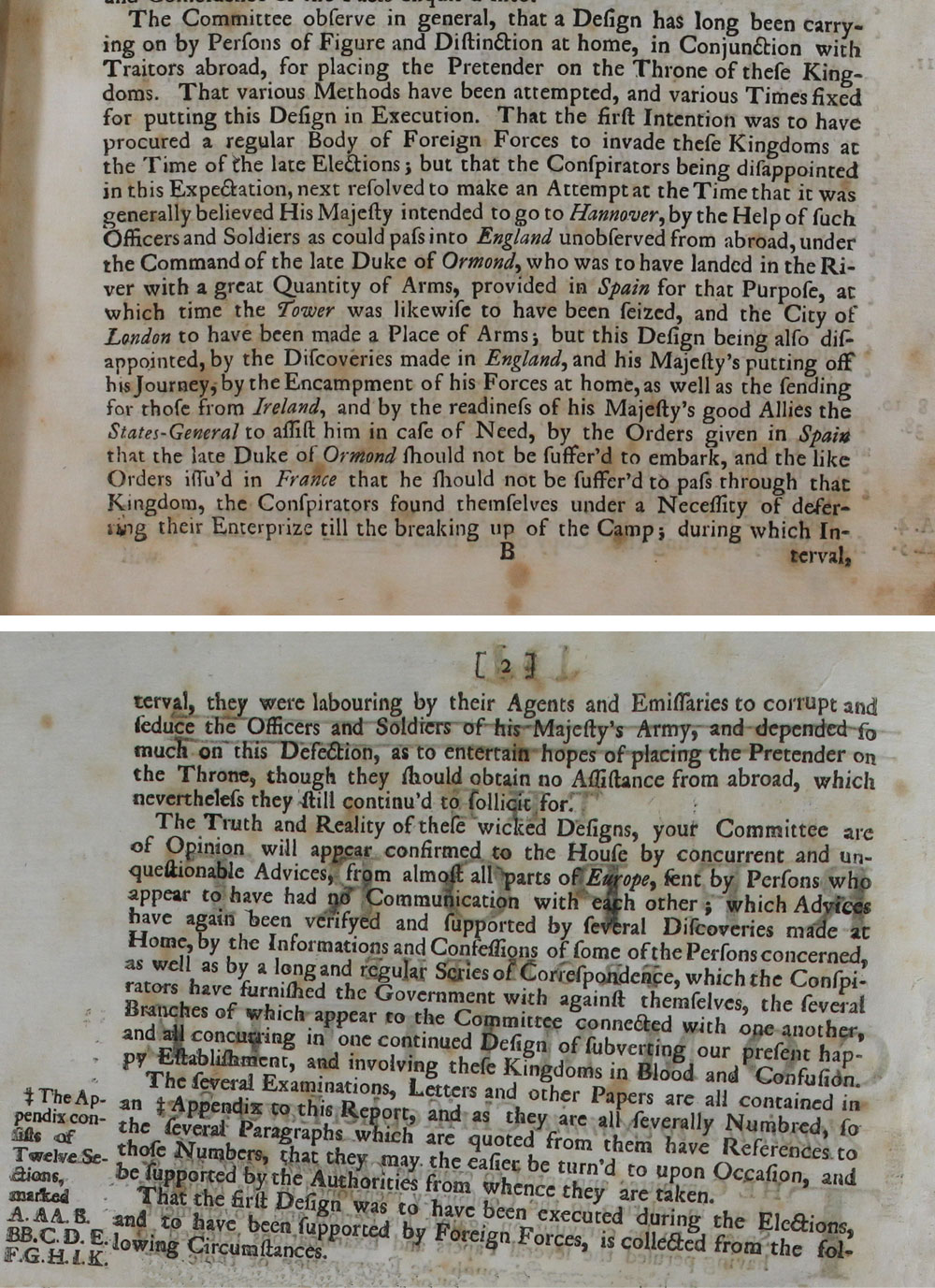 Extracts from a Government report on a Jacobite plot involving Christopher Layer, 5 March 1722. A government investigation outlines several plots to put the Old Pretender on the throne in place of George I. (T 64/306).

The Committee observe in general, that a Design [plot] has long been carrying on by Persons of Figure [importance] and Distinction at home, in Conjunction [together] with Traitors abroad, for placing the Pretender on the Throne of these Kingdoms. That various Methods have been attempted, and various Times fixed for putting this Design in Execution [action]. That the first Intention [aim] was to have procured [got hold of] a regular body of Foreign Forces to invade these Kingdoms at the Time of the late Elections; but that the Conspirators being disappointed in this Expectation, next resolved to make an Attempt at the Time that it was generally believed His Majesty intended to go to Hannover, by the Help of such Officers and Soldiers as could pass into England unobserved from abroad, under the Command of the late Duke of Ormond, who was to have landed in the River with a great Quantity of Arms, provided in Spain for that Purpose, at which time the Tower [Tower of London] was likewise to have been seized, and the City of London to have been made a Place of Arms; but this Design being also disappointed, by the Discoveries made in England, and his Majesty’s putting off his Journey, by the Encampment of his Forces at home, as well as the sending for those from Ireland, and by the readiness of his Majesty’s good Allies the States-General to afflict him in case of Need, by the Orders given in Spain that the late Duke of Ormond should not be suffer’d [allowed] to embark, and the like Orders issu’d in France that he should not be suffer’d to pass through that Kingdom, the Conspirators found themselves under a Necessity of deferring [putting off] their Enterprise till the breaking up of the Camp; during which Interval, they were labouring [working] by their Agents and Emissaries [messengers] to corrupt and seduce [influence] the Officers and Soldiers of his Majesty’s Army, and depended so much on this Defection [desertion], as to entertain hopes of placing the Pretender on the Throne, though they should obtain no Assistance from abroad, which nevertheless they still continu’d to solicit [request] for.

The Truth and Reality of these wicked Designs [plots], your Committee [George I’s officials investigating] are of Opinion will appear confirmed to the House by concurrent and unquestionable Advices [evidence at the time], from almost all parts of Europe, sent by Persons who appear to have had no Communication with each other; which Advices have again been verified [checked] and supported by several Discoveries made at Home, by the Informations and Confessions of some of the Persons concerned, as well as by a long and regular Series of Correspondence [letters], which the Conspirators have furnished [given] the Government with against themselves, the several Branches of which appear to be the Committee connected with one another, and all concurring [coming together] in one continued Design of subverting [upsetting] our present happy Establishment [government] , and involving these Kingdoms in Blood and Confusion.

The several Examinations [statements], Letters and other Papers are all contained in an *Appendix to this Report, and as they are all severally Numbred, to the several Paragraphs which are quoted from them have References to those Numbers, that they may the easier be turned to upon Occasion, and be supported by the Authorities from whence they are taken. [There is an appendix which lists all the evidence such as statements and letters which is numbered to show where it is used in the report].

That the first Design [plot] was to have been executed during the Elections, and to have been supported by Foreign Forces, is collected from the following Circumstances.