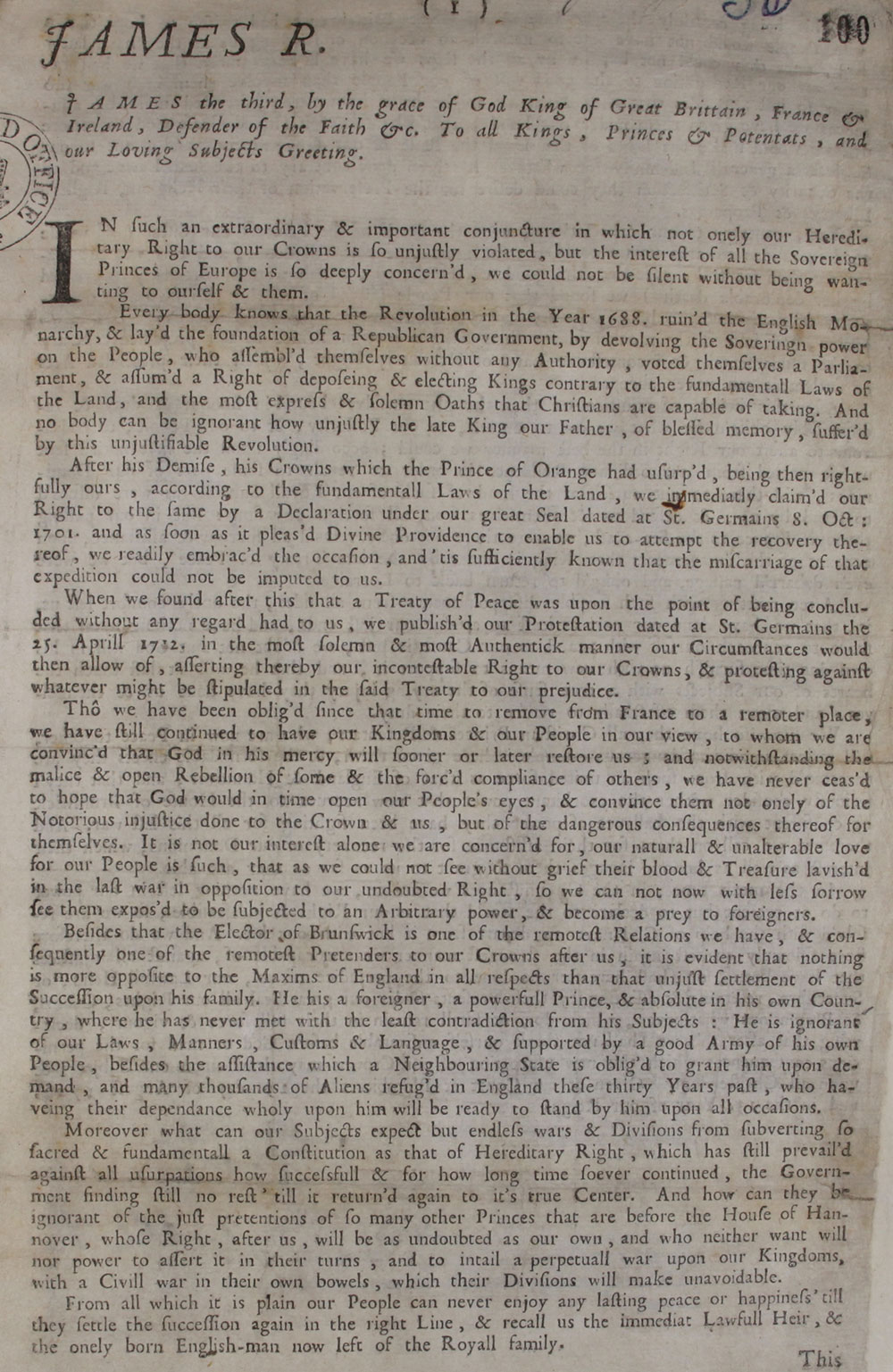 A handbill from James III, James Francis Edward, ‘The Old Pretender’ son of James II of England, August 1714 (SP 35/1/f30). James III explains how the Stuarts have been excluded from the succession. He says there can be no peace until the rightful heir of the kingdom is restored.

JAMES the third, by the grace of God King of Great Brittain, France & Ireland, Defender of the Faith &c. To all Kings, Princes & Potentats [rulers], and our Loving Subjects Greeting.

In such an extraordinary & important conjuncture [situation] in which not onely [only] our Hereditary Right [right to the throne] to our Crowns is so unjustly violated [disregarded], but the interest of all the Sovereign [royal] Princes of Europe is so deeply concern’d, we could not be silent without being wanting to ourself & them.

Every body knows that the Revolution in the Year 1688. ruin’d the English Monarchy, & lay’d the foundation of a Republican [rule without a King] Government, by devolving [passing] the Soveringn [royal] power on the People, who assembl’d themselves without any Authority, voted themselves a Parliament, & assum’d themselves without any Authority, voted themselves a Parliament, & assum’d a Right of deposeing & electing Kings contrary to the fundamentall [original] Laws of the Land, and the most express & solemn Oaths that Christians are capable of taking. And no body can be ignorant how unjustly the late King our Father [James II], of blessed memory, suffer’d by this unjustifiable Revolution [called the Glorious Revolution, 1688 William invaded and ruled with his wife Mary II until 1694.]

After his Demise [death], his Crowns which the Prince of Orange [William III of England & Ireland] had usurp’d [unjustly taken], being them rightfully ours, according to the fundamentall Laws of the Land, we immediately claim’d our Right to the same by a Declaration under our great Seal dated at St. Germains  8. Oct: 1701. And as soon as it pleas’d Divine Providence [God’s will] to enable us to attempt the recovery thereof, we readily embrac’d the occasion [took action], and ‘tis sufficiently known that the miscarriage [failure] of that expedition could not be imputed [related] to us.

When we found after this that a Treaty of Peace was upon the point of being concluded without any regard had to us, we publish’d our Protestation dated at St. Germains the 25. Aprill 1712 in the most solemn & most Authentick [genuine] manner our Circumstances would then allow of, alerting thereby our incontestable [unquestionable] Right to our Crowns, & protecting against whatever might be stipulated [set down] in the said Treaty to our prejudice [against us].

Tho’ we might have been oblig’d since that time to remove [travel] from France to a remoter place, we have still continued to have our Kingdoms & our People in our view, to whom we are convinc’d that God in his mercy will sooner or later restore us; and notwithstanding the malice [evil] & open Rebellion of some & the forc’d compliance [consent] of others, we have never ceas’d to hope that God would in time open our People’s eyes, & convince them not onely of the Notorious [wicked] injustice done to the Crown & us, but of the dangerous consequences thereof for themselves. It is not our interest alone we are concern’d for, our naturall & unalterable love for our People is such, that as we could not see without grief their blood & Treasure lavish’d in the last war in opposition to our undoubted Right, so we cannot now with less sorrow see them expos’d to be subjected to an Arbitrary [unreasonable] power, & become a prey to foreigners.

Besides that the Elector of Brunswick [George I, the nearest heir to Queen Anne] is one of the remotest Relations we have, & consequently one of the remotest Pretenders to our Crowns after us, it is evident that nothing is more opposite to the Maxims of England in all respects than that unjust settlement of the Succession upon his family. He is a foreigner, a powerful Prince, & absolute in his own Country, where he has never met with the least contradiction from his subjects: He is ignorant of our Laws, Manners, Customs & Language, & supported by a good Army of his own People, besides the assistance which a Neighbouring State is oblig’d to grant him upon demand, and many thousands of Aliens refug’d in England these thirty years past, who haveing their dependence wholly upon him will be ready to stand by him upon all occasions.

Moreover what can our Subjects expect but endless wars & Divisions from subverting [overthrowing] so sacred & fundamentall a Constitution as that of Hereditary Right, which has still prevail’d against all usurpations how successful & for how long time so ever continued, the Government finding still no rest ‘till it return’d again to it’s true Center. And how can they be ignorant of the just pretentions of so many other Princes that are before the House of Hannover, whose Right, after us, will be undoubted as your own, and who neither want will nor power to assert it in their turns, and to intail [result] a perpetuall war upon our Kingdoms, with a Civill war in their own bowels, which their Divisions will make unavoidable.

From all which it is plain our People can never enjoy any lasting peace or happiness’ till they settle the succession again in the right Line, & recall us the immediate Lawfull Heir, & the onely born English-man now left of the Royall family.