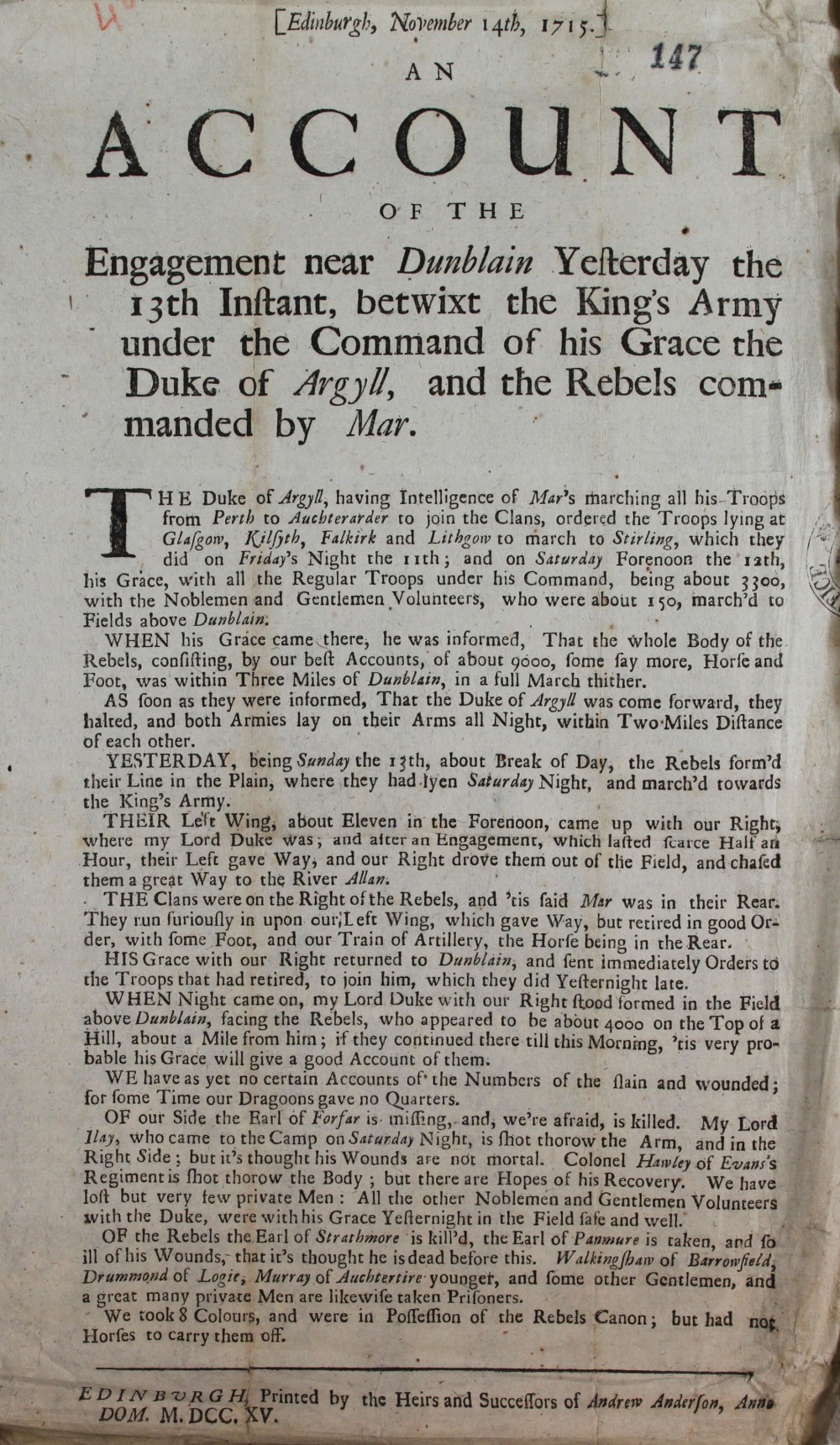 This is an account of the battle of Sheriffmuir from point of view of the Duke of Argyll who led the English army against the Jacobites led by the Earl of Mar.  14 November 1715 (SP 54/10/46A).

Engagement near Dunblain Yesterday the 13th Instant betwixt the King’s Army under the Command of his Grace the Duke of Argyll, and the Rebels commanded by Mar.

THE Duke of Argyll, having Intelligence of Mar’s marching all his Troops from Perth to Auchterarder to join the Clans, ordered the Troops lying at Glasgow, Kilsyth, Falkirk and Lithgow to march to Stirling, which they did on Friday’s Night the 11th; and on Saturday Forenoon the 12th, his Grace, with all the Regular Troops under his Command, being about 3300, with the Noblemen and Gentlemen Volunteers, who were about 150, march’d to Fields above Dunblain.

WHEN his Grace came there, he was informed, That the whole Body of the Rebels, consisting, by our best Accounts, of about 9000, some say more, Horse and Foot, was within Three Miles of Dunblain, in a full March thither.

AS soon as they were informed,That the Duke of Argyll was come forward, they halted, and both Armies lay on their Arms all Night, within Two Miles Distance of each other.

YESTERDAY, being Sunday the 13th, about Break of Day, the Rebels form’d their Line in the Plain, where they had lyen Saturday Night, and march’d towards the King’s Army.

THEIR Left Wing, about Eleven in the Forenoon, came up with our Right, where my Lord Duke was, and after an Engagement, which lasted scarce Half an Hour, their Left gave Way, and our Right drove them out of the Field, and chased them a great Way to the River Allan.

THE Clans were on the Right of the Rebels, and ‘tis said Mar was in their Rear. They run furiously in upon our Left Wing, which gave Way, but retired in good Order, with some Foot, and our Train of Artillery, the Horse being in the Rear.

His Grace with our Right returned to Dunblain, and sent immediately Orders to the Troops that had retired to join him, which they did Yesternight late.

WHEN Night came on, my Lord Duke with our Right stood formed in the Field above Dunblain, facing the Rebels, who appeared to be about 4000 on the Top of a Hill, about a Mile from him; if they continued there till this Morning, ‘tis very probable his Grace will give a good Account of them.

WE have as yet no certain Accounts of the Numbers of the slain and wounded; for some Time our Dragoons gave no Quarters.

OF our Side the Earl of Forfar is missing, and we’re afraid, is killed. My Lord Ilay who came to the Camp on Saturday Night is shot thorow the Arm, and in the Right Side; but it’s thought his Wounds are not mortal. Colonel Hawley of Evan’s Regiment is shot thorow [through] the Body; but there are Hopes of his Recovery. We have lost but very few private Men: All the other Noblemen and Gentlemen Volunteers with the Duke, were with his Grace Yesternight in the Field safe and well.

OF the Rebels the Earl of Strathmore is kill’d, the Earl of Panmure is taken, and so ill of his Wounds, that it’s thought he is dead before this. Walkingshaw of Barrowfield, Drummond of Logie, Murray of Auchtertire younger, and some other Gentlemen, and a great many private Men are likewise taken Prisoners.

We took 8 Colours [regimental flags], and were in Possession of the Rebels Cannon; but had not Horses to carry them off.