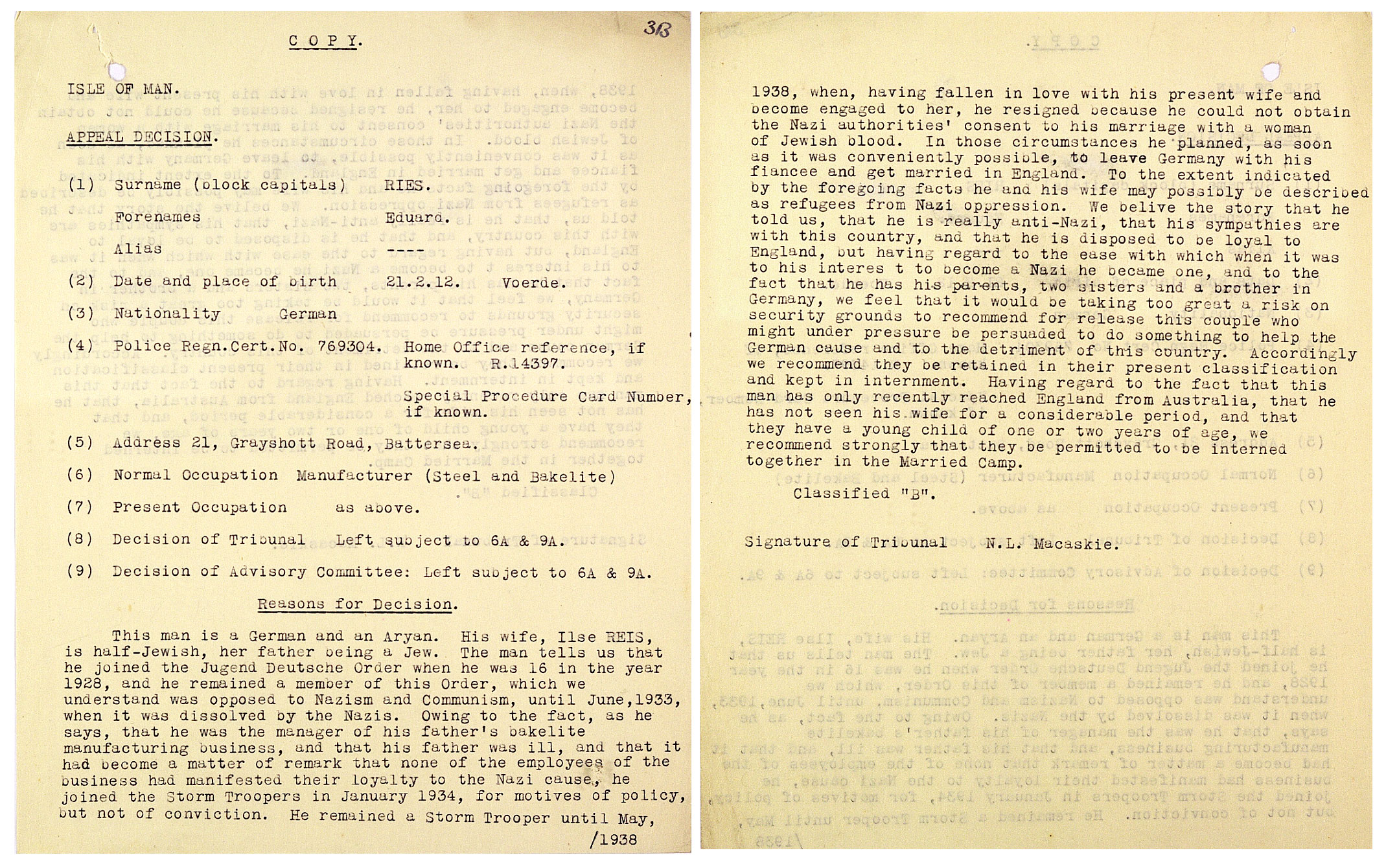 (7) Present Occupation as above.

(9) Decision of Advisory Committee: Left subject to 6A. and 9A.

This man is a German and an Aryan. His wife, Ilse REIS, is half-Jewish, her father being a Jew. The man tells us that he joined the Jugend Deutsche Order when he was 16 in the year 1928, and he remained a member of this Order, which we understand was opposed to Nazism and Communism, until June, 1933, when it was dissolved by the Nazis. Owing to the fact, as he says, that he was the manager of his father’s bakelite manufacturing business, and that his father was ill, and that it had become a matter of remark that none of the employees of the business had manifested their loyalty to the Nazi cause, he joined the Storm Troopers in January 1934, for motives of policy, but not of conviction. He remained a Storm Trooper until May, 1938, when, having fallen in love with his present wife and become engaged to her, he resigned because he could not obtain the Nazi authorities’ consent to his marriage with a woman of Jewish blood. In those circumstances he planned, as soon as it was conveniently possible, to leave Germany with his fiancee and get married in England. To the extent indicated by the foregoing facts he and his wife may possibly be described as refugees from Nazi oppression. We believe the story that he told us, that he is really anti-Nazi, that his sympathies are with this country, and that he is disposed to be loyal to England, but having regard to the ease with which when it was to his interest to become a Nazi he became one, and to the fact that he has his parents, two sisters and a brother in Germany, we feel that it would be taking too great a risk on security grounds to recommend for release this couple who might under pressure be persuaded to do something to help the German cause and to the detriment of this country. Accordingly we recommend they be retained in their present classification and kept in internment. Having regard to the fact that this man has only recently reached England from Australia, that he has not seen his wife for a considerable period, and that they have a young child of one or two years of age, we recommend strongly that they be permitted to be interned together in the Married Camp.