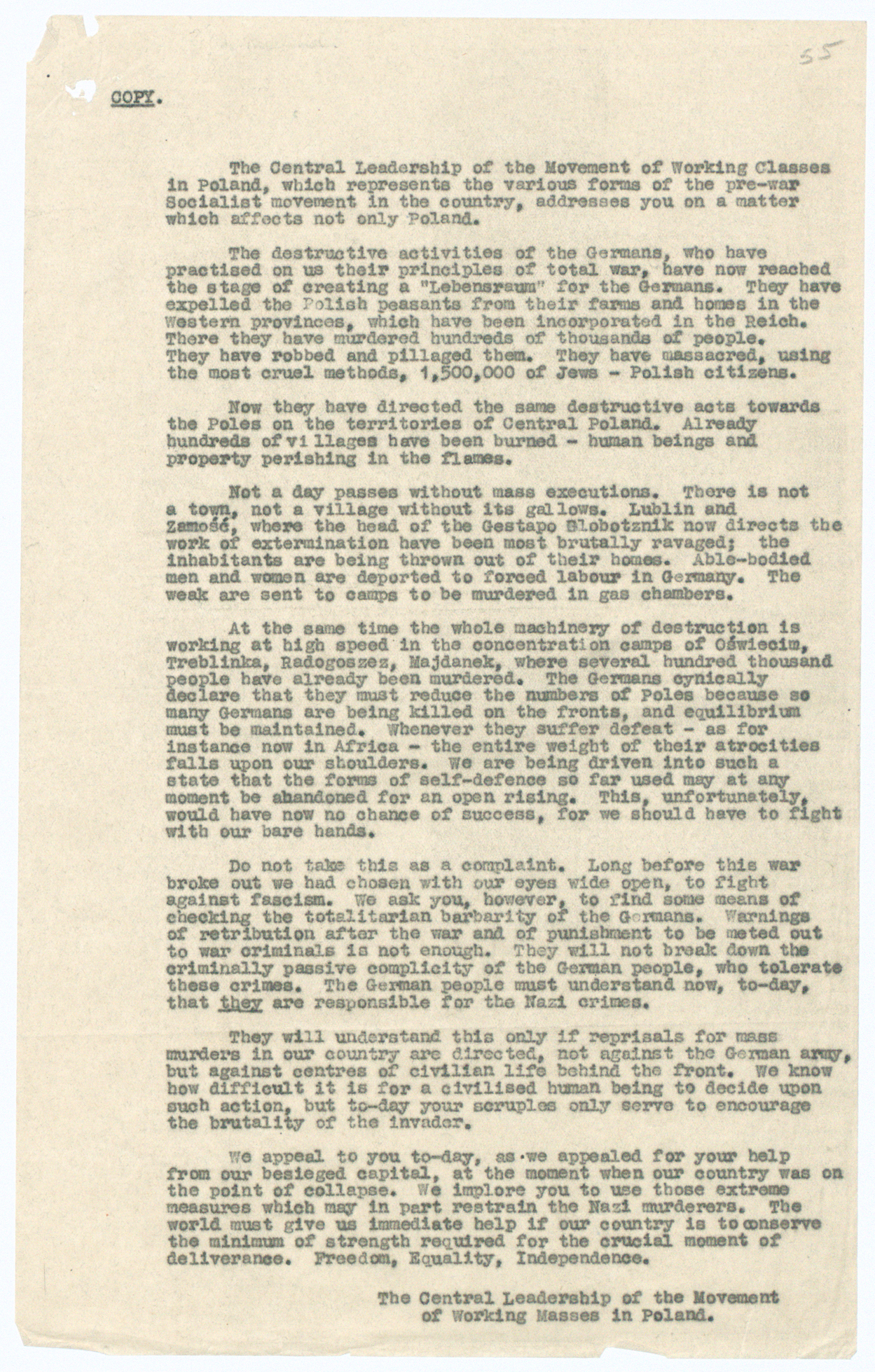 The Central Leadership of the Movement of Working Classes in Poland, which represents the various forms of the pre-war Socialist movement in the country, addresses you on a matter which affects not only Poland.

The destructive activities of the Germans, who have practised on us their principles of total war, have now reached the stage of creating a ‘Lebensraum’ for the Germans. They have expelled the Polish peasants from their farms and homes in the Western provinces, which have been incorporated in the Reich. There they have murdered hundreds of thousands of people. They have robbed and pillaged them. They have massacred, using the most cruel methods, 1,500,000 of Jews – Polish citizens.

Now they have directed the same destructive acts towards the Poles on the territories of Central Poland. Already hundreds of villages have been burned – human beings and property perishing in the flames.

Not a day passes without mass executions. There is not a town, not a village without its gallows. Lublin and Zamose, where the head of the Gestapo Blobotznik now directs the work of extermination have been most brutally ravaged; the inhabitants are being thrown out of their homes. Able-bodied men and women are deported to forced labour in Germany. The weak are sent to camps to be murdered in gas chambers.

At the same time the whole machinery of destruction is working at high speed in the concentration camps of Oswiecim, Treblinka, Radogoszez, Majdanek, where several hundred thousand people have already been murdered. The Germans cynically declare that they must reduce the numbers of Poles because many Germans are being killed on the fronts, and equilibrium must be maintained. Whenever they suffer defeat – as for instance now in Africa – the entire weight of their atrocities falls upon our shoulders. We are being driven into such a state that the forms of self-defence so far used may at any moment be abandoned for an open rising. This, unfortunately, would have now no chance of success, for we should have to fight with our bare hands.

Do not take this as a complaint. Long before this war broke out we had chosen with our eyes wide open, to fight against fascism. We ask you, however, to find some means of checking the totalitarian barbarity of the Germans. Warnings of retribution after the war and of punishment to be meted out to war criminals is not enough. They will not break down the criminally passive complicity of the German people, who tolerate these crimes. The German people must understand now, to-day, that they are responsible for the Nazi crimes.

They will understand this only if reprisals for mass murders in our country are directed, not against the German army, but against centres of civilian life behind the front. We know how difficult it is for a civilised human being to decide upon such action, but to-day your scruples only serve to encourage the brutality of the invader.

We appeal to you to-day, as we appealed for your help from our besieged capital, at the moment when our country was on the point of collapse. We implore you to use those extreme measures which may in part restrain the Nazi murderers. The world must give us immediate help if our country is to conserve the minimum of strength required for the crucial moment of deliverance. Freedom, Equality, Independence.

The Central Leadership of the Movement of Working Masses in Poland.