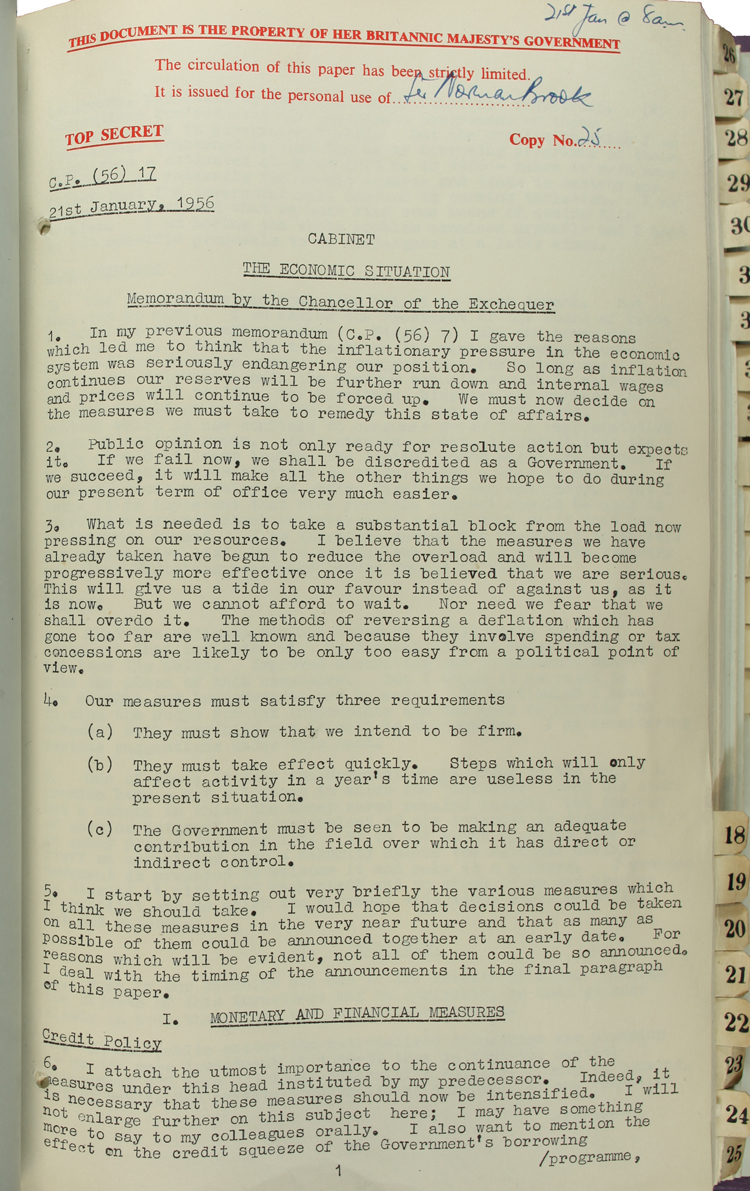 Memorandum from the Chancellor of the Exchequer Harold Macmillan, 21st January 1956 (CAB 129/79)

Memorandum by the Chancellor of the Exchequer

1. In my previous memorandum (C.P. (56) 7) I gave the reasons which led me to think that the inflationary pressure in the economic system was seriously endangering our position. So long as inflation continues our reserves will be further run down and internal wages and prices will continue to be forced up. We must now decide on the measures we must take to remedy this state of affairs.

2. Public opinion is not only ready for resolute action but expects it. If we fail now, we shall be discredited as a Government. If we succeed, it will make all the other things we hope to do during our present term of office very much easier.

3. What is needed is to take a substantial block from the load now pressing on our resources. I believe that the measures that we already taken have begun to reduce the overload and will become progressively more effective once it is believed that we are serious. This will give us a tide in our favour instead of against us, as it is now. But we cannot afford to wait. Nor need we fear that we shall overdo it. The methods of reversing a deflation which has gone too far are well known and because they involve spending or tax concessions are likely to be only too easy from a political point of view.

4. Our measures must satisfy three requirements

(a) They must show that we intend to be firm

(b) They must take effect quickly. Steps which will only affect activity in a year’s time are useless in the present situation.

(c) The Government must be seen to be making an adequate contribution in the field over which it has direct or indirect control.

I start by setting out very briefly the various measures which I think we should take. I would hope that decisions could be taken on all these measures in the very near future and that as many as possible of them could be announced together at an early date. For reasons that will be evident, not all of them could be so announced. I deal with the timing of the announcements in the final paragraph of this paper.