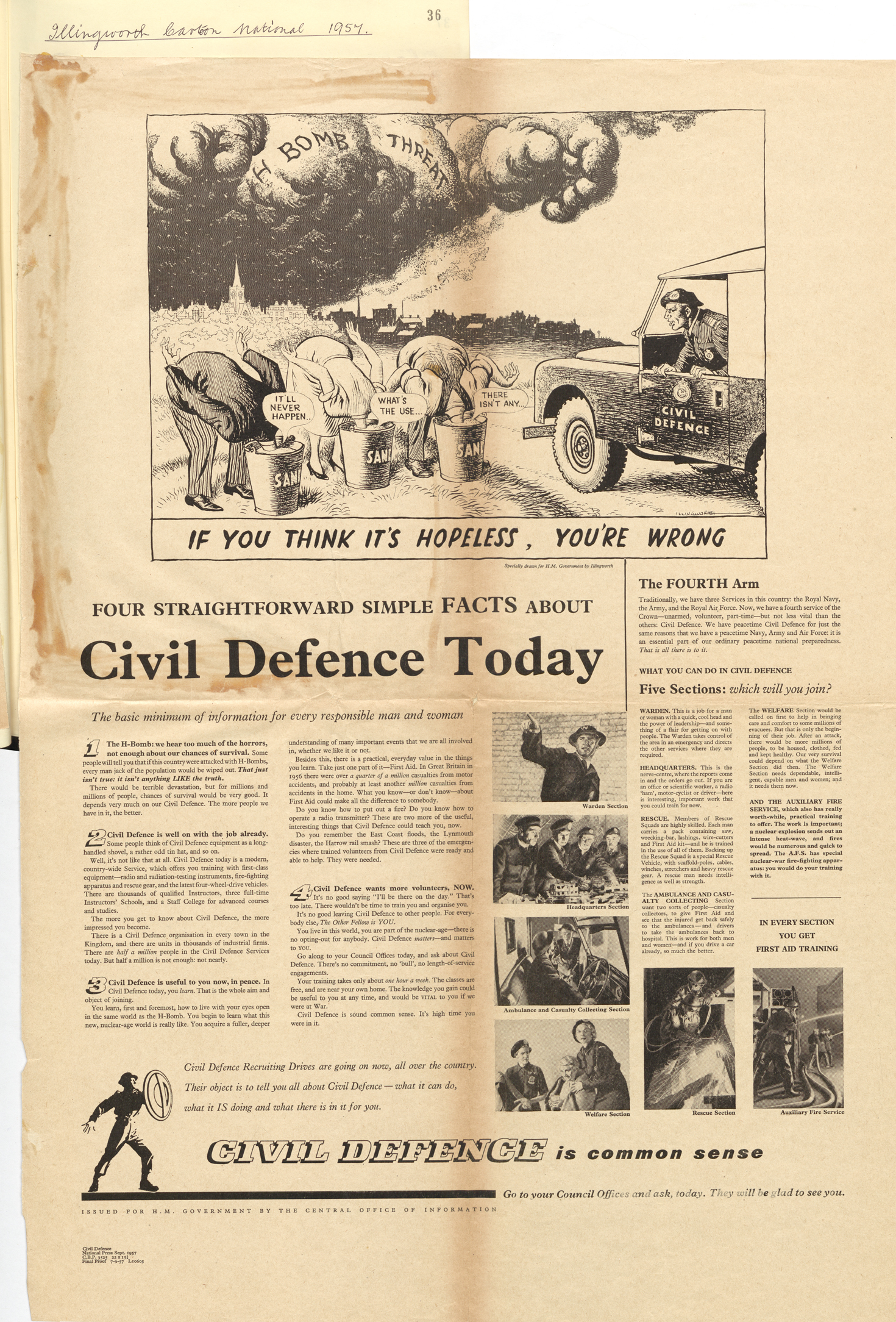 The basic minimum of information for every responsible man and woman

1. The H-Bomb: we hear too much of the horrors, not enough about our chances of survival. Some people will tell you that if this country were attacked with H-Bombs, every man jack of the population would be wiped out. That just isn’t true: it isn’t anything LIKE the truth.There would be terrible devastation, but for millions and millions of people, chances of survival would be very good. It depends very much on our Civil Defence. The more people we have in it, the better.

2. Civil Defence is well on with the job already. Some people think of Civil Defence equipment as a long handled shovel, a rather odd tin hat, and so on.Well it’s not like at all. Civil Defence today is a modern, country-wide Service, which offers you training with first-class equipment-radio and radiation-testing instruments, fire-fighting apparatus and rescue gear, and the latest four-wheel-drive vehicles. There are thousands of qualified Instructors, three full-time Instructors’ Schools, and a Staff College for advanced courses and studies.The more you get to know about Civil Defence, the more impressed you become.There is a Civil Defence organisation in every town in the Kingdom, and there are units in thousands of industrial firms. There are half a million people in the Civil Defence Services today. But half a million is not enough: not nearly.

3. Civil Defence is useful to you now, in peace. In Civil Defence today, you learn. That is the whole aim and object of joining.You learn, first and foremost, how to live with your eyes open in the same world as the H-Bomb. You begin to learn what this new, nuclear-age world is really like. You acquire a fuller, deeper understanding of many important events that we are all involved in, whether we like it or not.Besides this, there is a practical, everyday value in the things you learn. Take just one part of it- First Aid. In Great Britain in 1956 there were over a quarter of a million casualties from motor accidents and probably at least another million casualties from accidents in the home. What you know—or don’t know—about First Aid could make all the difference to somebody.

Do you know how to put out a fire? Do you know to operate a radio transmitter? These are two more of the useful, interesting things that Civil Defence could teach you, now.Do you remember the East Coast floods, the Lynmouth disaster, the Harrow rail smash? These are three of the emergencies where trained volunteers from Civil Defence were ready and able to help. They were needed.

4. Civil Defence wants more volunteers, NOW. It’s no good saying “I’ll be there on the day.” That’s too late. There wouldn’t be time to train and organise you. It’s no good leaving Civil Defence to other people. For everybody else, The Other Fellow is YOU.You live in this world, you are part of the nuclear-age – there is no opting-out for anybody. Civil Defence matters- and matters to YOU.Go along to your Council Offices today, and ask about Civil Defence. There’s no commitment, no “bull”, no length-of-service engagements.Your training takes only about one hour a week. The classes are free and near your own home. The knowledge you gain could be useful to you at any time, and would be VITAL to you if we were at WAR.Civil Defence is sound common sense. It’s high time you were in it.Civil Defence Recruiting Drives are going on now, all over the country. Their object is to tell you all about Civil Defence- what it can do-what it IS doing and what there is in it for you.

Traditionally, we have three Services in this country: the Royal Navy, the Army, and the Royal Air Force. Now, we have a fourth service of the Crown-unarmed, volunteer, part-time-but not less vital than the others: Civil Defence. We have peacetime Civil Defence for just the same reasons that we have a peacetime Navy, Army and Air Force: it is an essential part of our ordinary peacetime national preparedness. That is all there is to it.

WHAT YOU CAN DO IN CIVIL DEFENCE

Five Sections: which will you join?

WARDEN. This is a job for a man or woman with a quick, cool head and some power of leadership-and something of a flair for getting on with people. The Warden takes control of the area in an emergency and directs the other services where they are required.

HEADQUARTERS. This is the nerve-centre, where the reports come in and the orders go out. If you are an office or scientific worker, a radio ‘ham’, motor-cyclist or driver-here is interesting, important work that you could train for now.

RESCUE. Members of Rescue Squads are highly skilled. Each man carries a pack containing saw, wrecking-bar, lashings, wire cutters and First Aid kit- and he trained in the use of all of them. Backing up the Rescue Squad is a special Rescue Vehicle, with scaffold poles, cables, winches, stretchers and heavy rescue gear. A rescue man needs intelligence as well as strength.

The AMBULANCE AND CASUALTY COLLECTING Section want two sorts of people-casualty collectors, to give First Aid and see that the injured get back safely to the ambulances- and drivers to take the ambulances back to hospital. This is work for both men and women- and if you drive a car already, so much the better.

The WELFARE Section would be called on first to help in bringing care and comfort to some millions of evacuees. But that is only the beginning of their job. After an attack there would be more millions of people, to be housed, clothed, fed and kept healthy. Our very survival could depend on what the Welfare Section did then. The Welfare Section needs dependable, intelligent, capable men and women; and needs them now.

AND THE AUXILIARY FIRE SERVICE, which also has really worth-while, practical training to offer. The work is important; a nuclear explosion sends out an intense heat-wave, and fires would be numerous and quick to spread. The A.F.S. has special nuclear-war fire-fighting apparatus: you would do your training with it.

IN EVERY SECTION YOU GET FIRST AID TRAINING

Issued by H.M. Government by the Central Office of Information