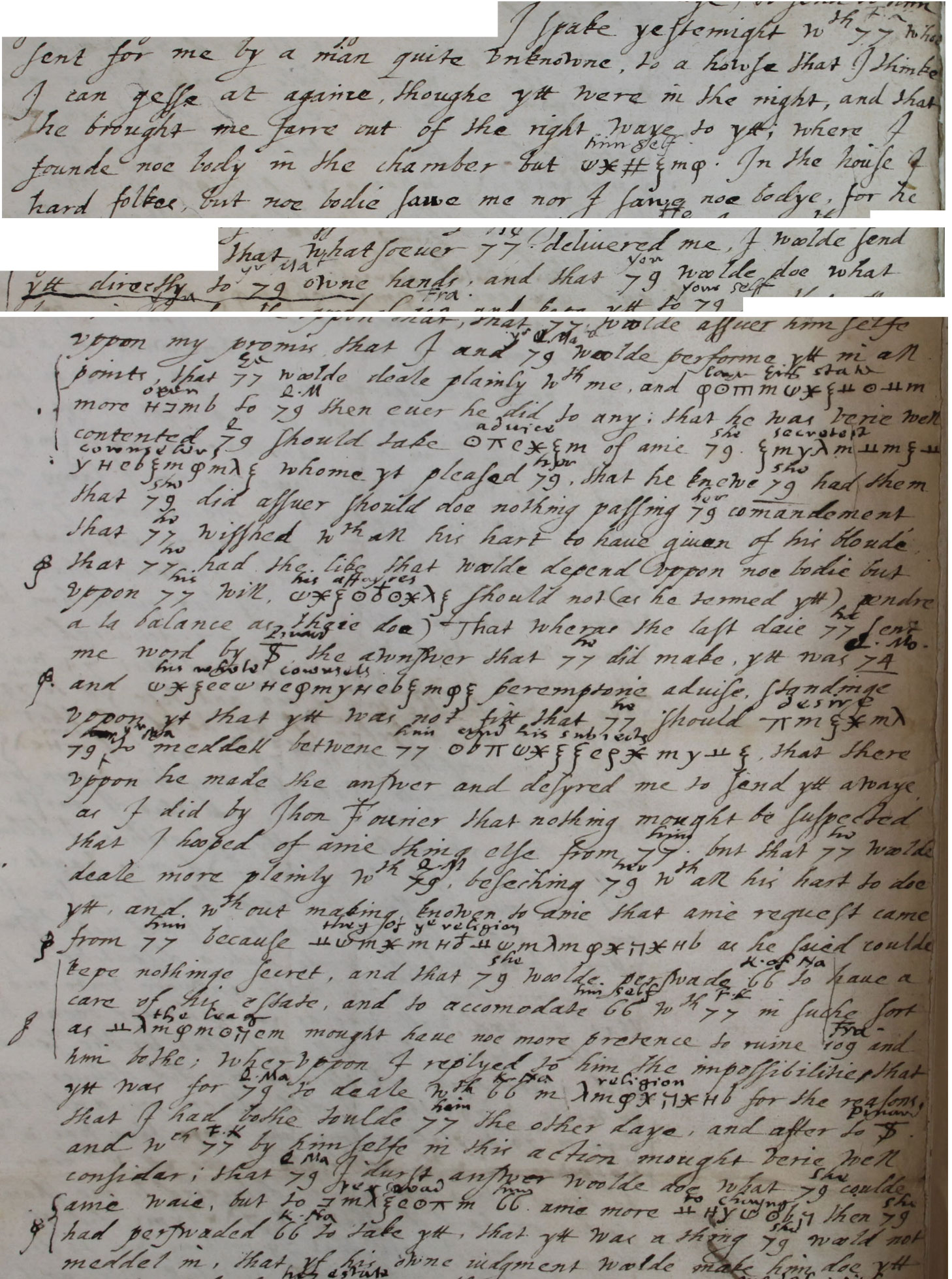 Stafford was the queen’s ambassador to France. Written in the anxious months between the execution of Mary Queen of Scots and the coming of Philip II’s Armada, the letter describes a clandestine meeting with King Henry III of France. Mary Queen of Scots had spent much of her childhood in France, having been married to the Dauphin, Francis. Her execution therefore prompted outrage in that kingdom. Stafford reports that the French King wishes Elizabeth to persuade his brother-in-law and heir to the throne, Henry of Navarre (the future Henry IV) to convert to Catholicism and so disempower the hard-line Catholic League. This is Elizabethan espionage at its cloak-and-dagger best. He writes proper names in cipher, which Elizabeth’s great spymaster, Sir Francis Walsingham, has deciphered. The latter has also drawn trefoils against certain key passages that he wishes the queen to read.

I spake yesternight with the King, who sent for me by a man quite unknown, to a house that I think I can guess at again, though it were in the night, and that he brought me far out of the right way to it; where I found nobody in the chamber but himself. In the house I heard folks, but nobody saw me nor I saw nobody, for that he brought me tarried not in the chamber. The King began with me… that whatsoever he delivered me, I would send it directly to your Majesty’s own hands, and that you would do what lay in you for the good of France, and keep it to yourself…

uppon my promis that I and your Majesty woolde performe ytt in all points, that he woolde deale plainly with me, and laye his state more open to QM then ever he did to any; that he was verie well contented Q should take advice of anie the secretest cownselors whome yt pleased her, that he knew she had them that she did assure should doe nothing passing her commandement, that he wisshed with all his hart to have given of his bloude that he had the like woolde depend uppon noe bodie but uppon his will, his affayres should not (as he termed ytt) pendre a la balance as theie doe…I hoped of anie thing else from him but that he woolde deale more pleinly with her Majestie, beseching her with all his hart to doe ytt, and without making knowen to anie that anie request came from him because they of ye religion as he saied coulde kepe nothinge secret, and that she woolde perswade the King of Navarre to have a care of his estate, and to accomodate him self with the French King in suche sort as the king mought have noe more pretence to ruine France and them bothe; wheruppon I replyed to him the impossibilitie that ytt was for the Queen’s Majestie to deale with the King of Navarre in religion…that ytt was a thing she woolde not meddel in…’