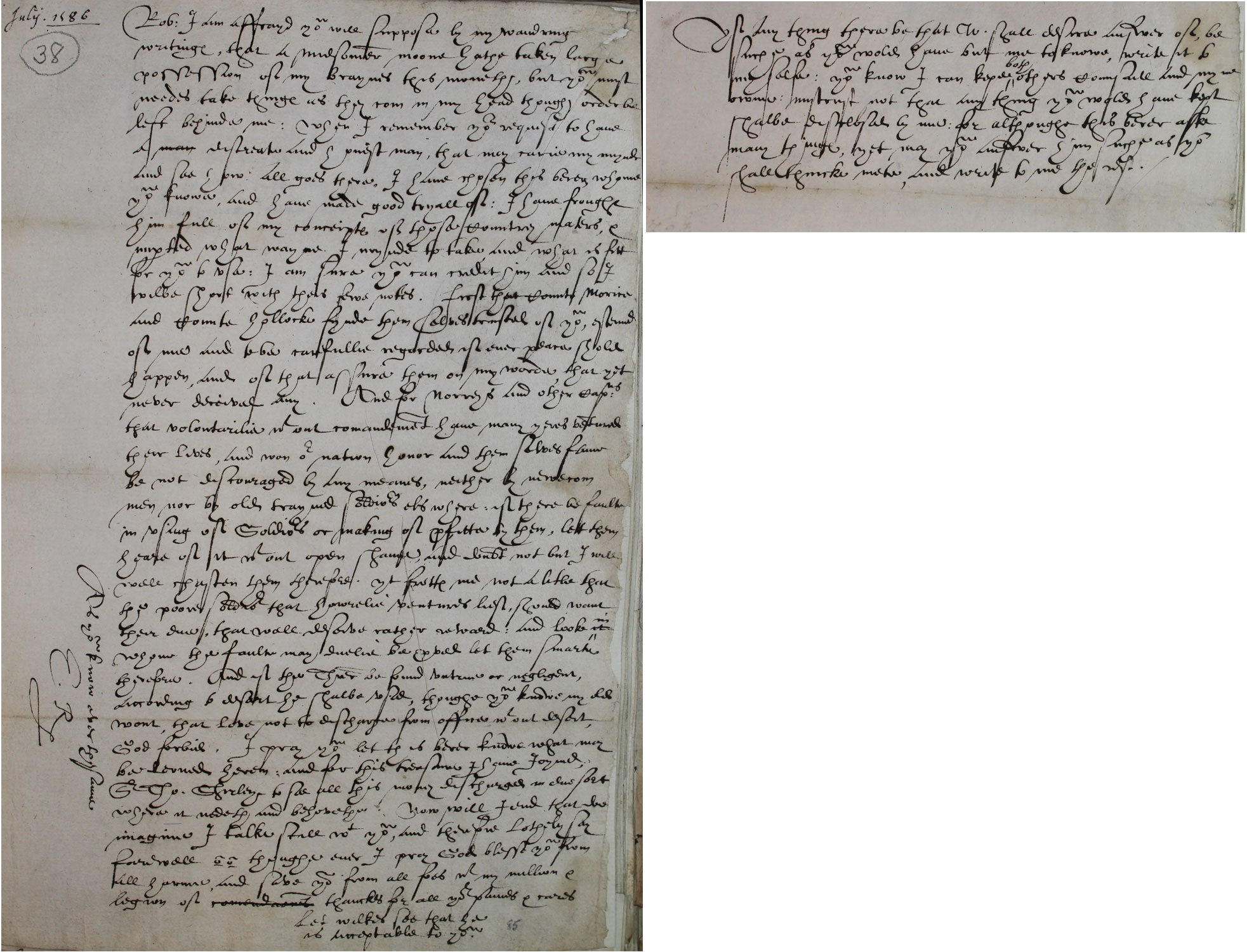 Dudley was provided with no authority other than his military command over the English forces, and only an informal instruction to advise the Dutch on political matters. But bad weather in the North Sea severely restricted communication with England over the next two months, and as a result he felt abandoned. This may have prompted his fateful decision to accept the appointment as Governor-General of the Netherlands, and he was sworn in on 15 January 1586 [O.S.]. Elizabeth was incandescent with rage when she heard of this and demanded his immediate recall. But she could never stay angry with her favourite for long, and in July she wrote him this letter, making it clear that he had been entirely forgiven. Despite her protestations, Elizabeth was always reluctant to properly provide for her troops – an issue that sparked widespread criticism in the years to come.

Rob: I am affrayd you will suppose by my wandring writings, that a midsomer moone hathe taken large possession of my braynes this moneth, but you must needes take thinges as they com in my head though order be left behind me. When I remember your request to have a discreate and honest man, that may carie my mynde and see how all goes there, I have chosen this berer whome you knowe, and have made good tryall of: I have froughte him full of my conceipte of those Country maters, & imparted what waye I mynde to take and what is fitt for you to use: I am sure you can credit him and so I wilbe short with thes fewe notes. First that Counte Morice and Counte Hollocke [Count Maurice and Count Hollock, commanders of the Dutch resistance against Spain] fynde them selves trusted of you, esteemd of mee and to be carefullie regarded if ever peace shold happen, and of that assure them on my worde, that yet never deceived any. And for Norrys [Sir John Norris, one of Elizabeth’s commanders in the Netherlands, and a rival of Dudley] and other captains that volontarilie without commandment have many yeres ventured their lives, and won our nation honor and themselves fame be not discouraged by any meanes, neither by newecom [new come] men nor by olde trayned soldiers elsewhere: If there be faulte in using of Soldiers or making of profitte by them, lett them heare of it without open shame, and doubt not but I will well chasten them therefore. Yt frettes me not a litle that the poore soldier that howrelie ventures life, should want ther due, that well deserve rather reward: and looke in whome the faulte may dulie be proved let them smarte therefore. And if the Treasurer be found untrue or negligent, according to desart he shalbe used, thoughe you knowe my old wont, that love not to discharge from office without desert, God forbid. I pray you let this berer knowe what may be lerned herein: and for this treasure I have joined, Sir Thomas Sherley to see all this money discharged in due sort where it nedeth and behoveth. Now will I end that do imagine I talke still with you, and therefore lothely say farewell ōō [the symbol for ‘eyes’, Elizabeth’s nickname for Dudley] thoughe ever I pray God blesse you from all harme and save you from all foes with my million and legion of thanckes for all your paines and cares. As you know, ever the same.*  E.R.

[Postscript] Let Wilkes see that he is acceptable to you. Yf any thyng there be, that Wilkes shall desire answer of, be suche as you wold have but me to knowe, write it to my selfe: you know I can keep both others’ Counsaill and myne owne: mistrust not that anything you wold have kept shalbe disclosed by me: for althoughe this berer aske many thinges, yet may you answer him suche as you shall thincke mete, and write to me the rest.

* ‘Ever the same’ or ‘Semper eadem’ was Elizabeth’s motto.