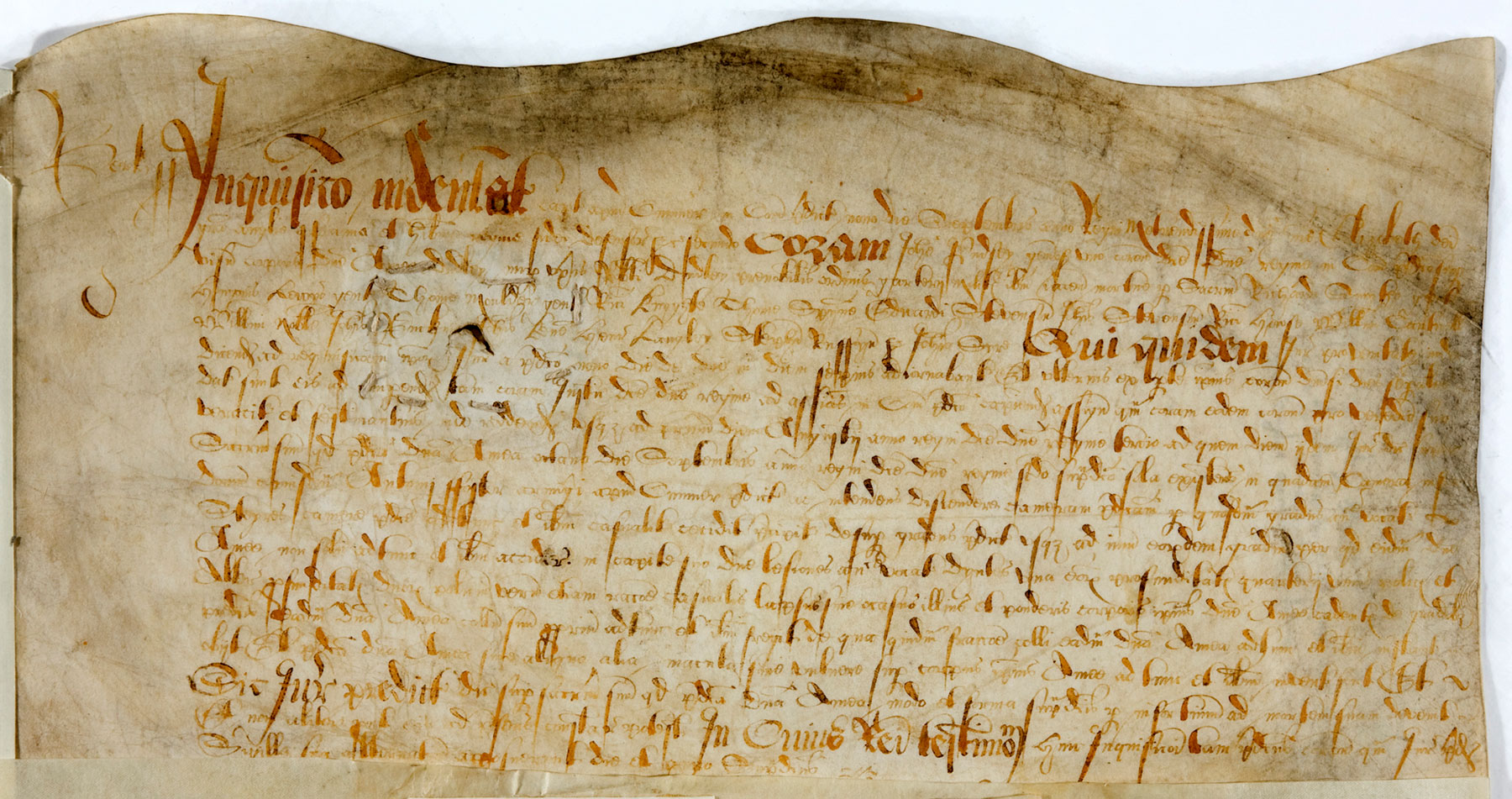 For all that she liked to keep foreign suitors in play, Elizabeth was already deeply in love with her Master of Horse, Robert Dudley. Ironically, though, the sudden death of Dudley’s wife in September 1560 removed any hope that the queen might have privately cherished of marrying him. Amy Robsart was found dead at the bottom of a short flight of stairs at Cumnor Place in Oxfordshire. The circumstances were suspicious. Her neck was broken and there were two small wounds to her head. On the day of her death, she had insisted that all of her servants attend the fair that was being held that day in Abingdon. When they returned, they found their mistress dead. Whether it was an accident, suicide or murder has never been resolved beyond doubt. The scandal reverberated not just around the kingdom but across the courts of Europe, so that Elizabeth was obliged to distance herself from Dudley in order to avoid being implicated any further.

Translation from the original Latin

Inquisition as indenture held at Cumnor in the aforesaid county [Oxfordshire] on 9 September in the second year of the reign of the most dread Lady Elizabeth, by the grace of God queen of England, France, and Ireland, defend of the faith, etc., before John Pudsey, gent, a coroner of the said lady queen in the aforesaid county, on inspection of the body of Lady Amy Dudley, late wife of Robert Dudley, knight of the most noble order of the garter, there lying dead: by oath of Richard Smith, gent., Humphrey Lewis, gent., Thomas Moulder, gent., Richard Knight, Thomas Spyre, Edward Stevenson, John Stevenson, Richard Hughes, William Cantrell, William Noble, John Buck, John Keene, Henry Lanlgey, Stephen Ruffyn, and John Sire: which certain jurors, sworn to tell the truth at our request, were adjourned from the aforesaid ninth day onwards day by day very often; and finally various several days were given to them by the selfsame coroner to appear both before the justices of the aforesaid lady queen at the assizes assigned to be held in the aforesaid county and before the same coroner in order there to return their verdict truthfully and speedily, until 1 August in the third year of the reign of the said lady queen; on which day the same jurors say under oath that the aforesaid Lady Amy on 8 September in the aforesaid second year of the reign of the said lady queen, being alone in a certain chamber within the home of a certain Anthony Forster, esq., in the aforesaid Cumnor, and intending to descend the aforesaid chamber by way of certain steps (in English called ‘steyres’) of the aforesaid chamber there and then accidentally fell precipitously down the aforesaid steps to the very bottom of the same steps, through which the same Lady Amy there and then sustained not only two injuries to her head (in English called ‘dyntes’) – one of which was a quarter of an inch deep and the other two inches deep – but truly also, by reason of the accidental injury or of that fall and of Lady Amy’s own body weight falling down the aforesaid stairs, the same Lady Amy there and then broke her own neck, on account of which certain fracture of the neck the same Lady Amy there and then died instantly; and the aforesaid Lady Amy was found there and then without any other mark or wound on her body; and thus the jurors say on their oath that the aforesaid Lady Amy in the manner and form aforesaid by misfortune came to her death and not otherwise, as they are able to agree at present; in testimony of which fact for this inquest both the aforesaid coroner and also the aforesaid jurors have in turn affixed their seals on the day