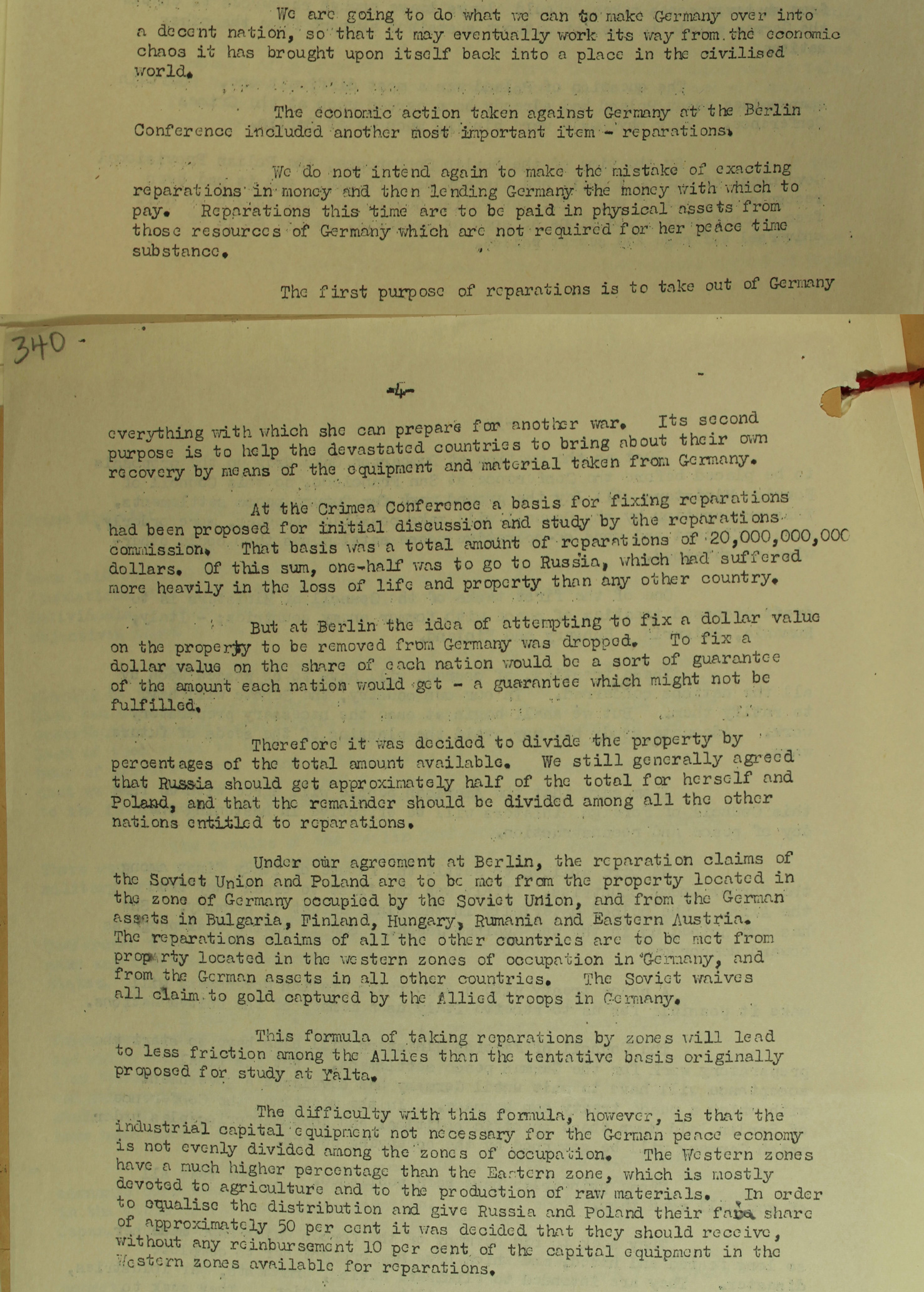 Speech by President Truman on the Potsdam Conference, August 1945. This extract covers the issue of reparations from Germany. (Catalogue ref: FO 371/50867)

We are going to do what we can to make Germany a decent nation, so that it may eventually work its way from the economic chaos it has brought upon itself back to into a place in the civilised world.

The economic action taken against Germany at the Berlin Conference included another most important item – reparations.

We do not intend again to make the mistake of exacting reparations in money and then lending Germany the money with which to pay. Reparations this time are to be paid in physical assets [e.g. machinery or power plants] from those resources of Germany which are not required for her peace time substance [in other words, the machinery Germany used to support its war effort will be taken away].

The first purpose of reparations is to take out of Germany everything with which she can prepare for another war. Its second purpose is to help the devastated countries to bring about their own recovery by means of the equipment and material taken from Germany.

At the Crimea Conference a basis for fixing reparations had been proposed for initial discussion and study by the reparations commission. That basis was a total amount of reparations of 20,000,000,000 dollars. Of this sum, one-half was to go to Russia, which had suffered more heavily in the loss of life and property than any other country.

Therefore it was decided to divide the property by percentages of the total amount available. We still generally agreed that Russia should get approximately half of the total for herself and Poland, and that the reminder should be divided among all the other nations entitled to reparations.

This formula of taking reparations by zones will lead to less friction among the Allies than the tentative basis originally proposed for study at Yalta.

The difficulty with this formula, however, is that the industrial capital equipment not necessary for the German peace economy is not evenly divided among the zones of occupation. The Western zones have a much higher percentage than the Eastern zone, which is mostly devoted to agriculture and the production of raw materials. In order to equalise the distribution and give Russia and Poland their fair share of approximately 450 per cent it was decided that they should receive, without any reimbursement 10 per cent of the capital equipment in the Western zones available for reparations.