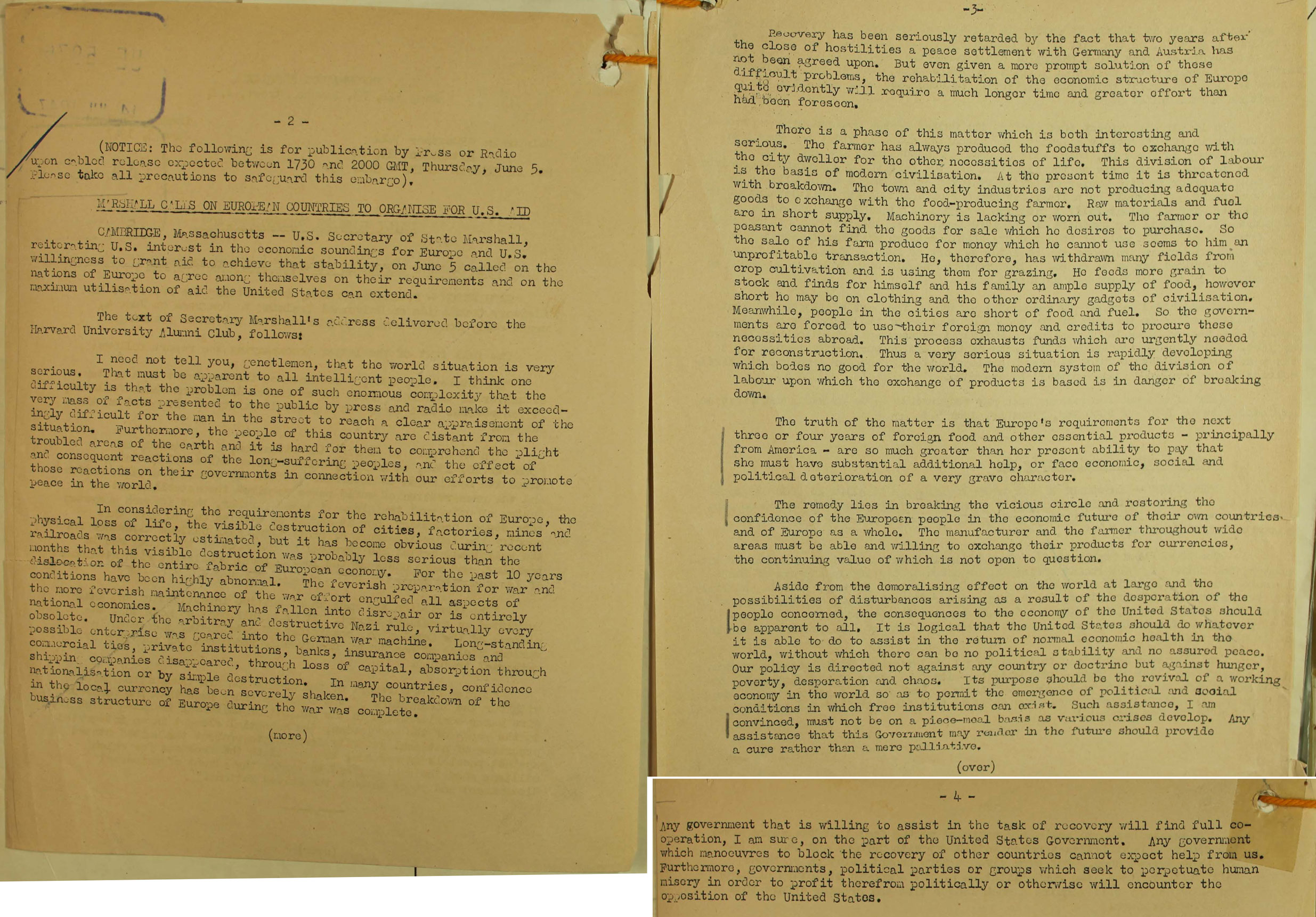 Extracts from speech by US Secretary of State George Marshall at Harvard University in June 1947 setting out the ‘Marshall Plan’ (Catalogue ref: FO 371/62411)

(NOTICE: The following is for publication by Press or Radio upon cabled release expected between 1730 and 2000 GMT, Thursday, June 5. Please take all precautions for safeguard this embargo).

MARSHALL CALLS ON EUROPEAN COUNTRIES TO ORGANISE FOR U.S. AID

CAMBRIDGE, Massachusetts—U.S. Secretary of State Marshall, reiterating U.S. interest in the economic soundings for Europe and U.S willingness to grant aid to achieve that stability, on June 5 called on the nations of Europe to agree among themselves on their requirements and on the maximum utilisation of aid the United States can extend.

I need not tell you, gentlemen, that the world situation is very serious. That must be apparent to all intelligent people. I think one difficulty is that the problem is one of such enormous complexity that the very mass of facts presented to the public by press and radio make it exceedingly difficult for the man the street to reach a clear a appraisement of the troubled areas of the earth and it is hard for them to comprehend the plight and consequent reactions of the long-suffering peoples, and the effect of those reactions on their governments in connection with our efforts to promote peace in the world.

In considering the requirements for the rehabilitation of Europe, the physical loss of life, the visible destruction of cities, factories, mines and railroads was correctly estimated, but it has become obvious during recent months that this visible destruction was probably less serious than the dislocation of the entire fabric of European economy. For the past ten years conditions have been highly abnormal. The feverish preparation for war and the more feverish maintenance of the war effort engulfed all aspects of national economies. Machinery has fallen into disrepair or is entirely obsolete. Under the arbitrary and destructive Nazi rule, virtually every possible enterprise was geared into the German war machine. Long-standing commercial ties, private institutions, banks insurance companies and shipping companies disappeared, through loss of capital, absorption through nationalisation or by simple destruction. In many countries, confidence in the local currency has been severely shaken. The breakdown of the business of Europe during the war was complete.

Recovery has been seriously retarded by the fact that two years after the close of hostilities a peace settlement with Germany and Austria has not been agreed upon. But even a more prompt solution of these difficult problems, the rehabilitation of the economic structure of Europe quite evidently will require a much longer time and greater effort than had been foreseen.

There is a phase of this matter which is both interesting and serious. The farmer has always produced the foodstuffs to exchange with the city dweller for the other necessities of life. This division of labour is the basis of modern civilisation. At the present time it is threatened with breakdown. The town and city industries are not producing adequate goods to exchange with the food-producing farmer. Raw materials and fuel are in short supply. Machinery is lacking or worn out. The farmer or peasant cannot find the goods for sale which he desires to purchase. So the sale of his farm produce for money which he cannot use seems to him an unprofitable transaction. He therefore has withdrawn many fields from crop cultivation and is using them for grazing. He feeds more grain to stock and finds for himself and his family an ample supply of food, however short he may be on clothing and the other ordinary gadgets of civilisation. Meanwhile, people in the cities are short of food and fuel. So the governments are forced to use their foreign money and credits to procure these necessities abroad. This process exhausts funds which are urgently needed for reconstruction. Thus a very serious situation is rapidly developing which bodes no good for the world. The modern system of division of labour upon which the exchange of products is based is in danger of breaking down.

The truth of the matter is that Europe’s requirements for the next three or four years of foreign food and other essential products – principally from America – are so much greater than her present ability to pay that she must have substantial additional help or face economic, social, and political deterioration of a very grave character.

The remedy lies in breaking the vicious circle and restoring the confidence of the European people in the economic future of their own countries and of Europe as a whole. The manufacturer and the farmer throughout wide areas must be able and willing to exchange their products for currencies, the continuing value of which is not open to question.

Aside from the demoralising effect on the world at large and the possibilities of disturbance arising as a result of the desperation of the people concerned, the consequences to the economy of the United States should be apparent to all. It is logical that the United States should do whatever it is able to do to assist in the return of normal economic health in the world, without which there can be no political stability and no assured peace.  Our policy is directed not against any country or doctrine but against hunger, poverty, desperation and chaos. Its purpose should be revival of a working economy in the world so as to permit the emergence of political and social conditions in which free institutions can exist. Such assistance I am convinced, must not be a piece-meal basis as various crises develop. Any assistance that this Government may render in the future should provide a cure rather than a mere palliative.

Any government that is willing to assist in the task of recovery will find full co-operation I am sure, on the part of the United States Government. Any government which manoeuvres to block the recovery of other countries cannot expect help from us. Furthermore, governments, political parties, or groups which seek to perpetuate human misery in order to profit therefrom politically or otherwise will encounter the opposition of the United States.