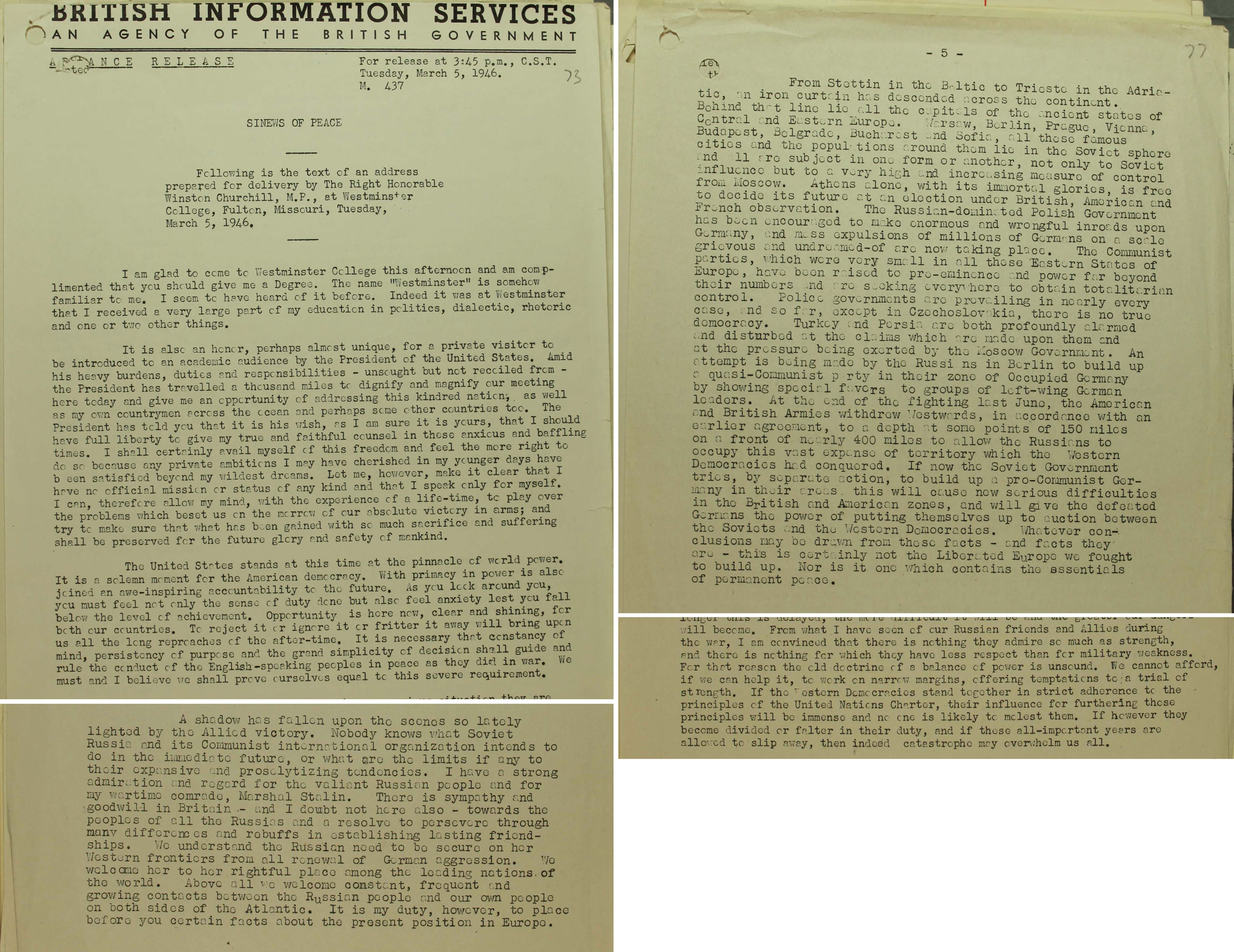 AN AGENCY OF THE BRITISH GOVERNMENT

Following IS THE Text of an address prepared for delivery by The Right Honorable Winston Churchill, M.P., at Westminster College, Fulton, Missouri, Tuesday,

I am glad to come to Westminster College this afternoon and am complimented that you should give me a Degree. The name “Westminster” is somehow familiar to me. I seem to have heard of it before. Indeed it was at Westminster that I received a very large part of my education in politics, dialectic, rhetoric and one or two other things.

It is also an honour, ladies and gentlemen, perhaps almost unique, for a private visitor to be introduced to an academic audience by the President of the United States. Amid his heavy burdens, duties and responsibilities-unsought but not reconciled from- the President has travelled a thousand miles to dignify and magnify our meeting here today and give me an opportunity of addressing this kindred nation, as well as my own countrymen across the ocean and perhaps some other countries too. The President has told you that it is his wish, as I am sure it is yours, that I should have full liberty to give my true and faithful counsel in these anxious and baffling times. I shall certainly avail myself of this freedom and feel the more right to do so because any private ambitions I may have cherished in my younger days have been satisfied beyond my wildest dreams. Let me however make it clear that I have no official mission or status of any kind, and that I speak only for myself. I can therefore allow my mind, with the experience of a lifetime, to play over the problems which beset us on the morrow of our absolute victory in arms; and try to make sure that what has been gained with so much sacrifice and suffering shall be preserved for the future glory and safety of mankind.

The United States stands at this time at the pinnacle of world power. It is a solemn moment for the American democracy. With primacy in power is also joined an awe-inspiring accountability to the future. As you look around you, you must feel not only the sense of duty done but also feel anxiety lest you fall below the level of achievement. Opportunity is here now, clear and shining, for both our countries. To reject it or ignore it or fritter it away will bring upon us all the long reproaches of the after-time. It is necessary that constancy of mind, persistency of purpose and the grand simplicity of decision shall guide and rule the conduct of the English-speaking peoples in peace as they did in war. We must and I believe we shall prove ourselves equal to this severe requirement.

A shadow has fallen upon the scenes so lately lighted by the Allied victory. Nobody knows what Soviet Russia and its Communist international organization intends to do in the immediate future or what are the limits if any to their expansive and proselytizing tendencies. I have a strong admiration and regards for the valiant Russian people and for my wartime comrade, Marshal Stalin. There is sympathy and goodwill in Britain- and I doubt not here also- towards the peoples of all the Russias and a resolve to preserve through many differences and rebuffs in establishing lasting friendships. We understand the Russian need to be secure on her western frontiers by the removal of all possibility of German aggression. We welcome Russia to her rightful place among the leading nations of the world. Above all we welcome constant, frequent and growing contacts between the Russian people and our own people on both sides of the Atlantic. It is my duty however, for I am sure you would wish me to state the facts as I see them to you, to place before you certain facts about the present position in Europe.

From Stettin in the Baltic to Trieste in the Adriatic an iron curtain has descended across the Continent. Behind that line lie all the capitals of the ancient states of Central and Eastern Europe. Warsaw, Berlin, Prague, Vienna, Budapest, Belgrade, Bucharest and Sofia, all these famous cities and the populations around them lie in what I must call the Soviet sphere, and all are subject in one form or another, not only to Soviet influence but to a very high and, in some cases, increasing measure of control from Moscow. Athens alone, with its immortal glories, is free to decide its future at an election under British, American and French observation. The Russian-dominated Polish Government has been encouraged to make enormous and wrongful inroads upon Germany, and mass expulsions of millions of Germans on a scale grievous and undreamed-of are now taking place. The Communist parties, which were very small in all these Eastern States of Europe, have been raised to pre-eminence and power far beyond their numbers and are seeking everywhere to obtain totalitarian control. Police governments are prevailing in nearly every case, and so far, except in Czechoslovakia, there is no true democracy. Turkey and Persia are both profoundly alarmed and disturbed at the claims which are being made upon them and at the pressure being exerted by the Moscow Government. An attempt is being made by the Russians in Berlin to build up a quasi-Communist party in their zone of occupied Germany by showing special favors to groups of left-wing German leaders.  At the end of the fighting last June, the American and British Armies withdrew \westwards, in accordance with an earlier agreement, to a depth at some points of 150 miles on a front of nearly 400 miles to allow the Russians to occupy this vast expanse of territory which the Western Democracies had conquered. If now the Soviet Government tries, by separate action, to build up a pro-Communist Germany in their areas this will cause new serious difficulties in the British and American zones, and will give the defeated Germans the power of putting themselves up to auction between the Soviets and the Western Democracies. Whatever conclusions may be from from these facts- and facts they are-this is certainly not the Liberated Europe we fought to build up. Nor is this one which contains the essentials of permanent peace.

From what I have seen of our Russian friends and Allies during the war, I am convinced that there is nothing they admire so much as strength, and there is nothing for which they have less respect than for weakness, especially military weakness. For that reason the old doctrine of a balance of power is unsound. We cannot afford, if we can help it, to work on narrow margins, offering temptations to a trial of strength. If the Western Democracies stand together in strict adherence to the principles of the United Nations charter, their influence for furthering these principles will be immense and no one is likely to molest them. If however they become divided or falter in their duty and if these all-important years are allowed to slip away then indeed catastrophe may overwhelm us all.