This is a report to William Laud, Archbishop of Canterbury, from some of his informers. Laud had a network across the country that sent him regular reports about what people were saying. Throughout the 1630s Charles I and William Laud tried to change the organisation of the church and how people worshipped in church. As a result, Laud made many enemies.

Laud punished some of his critics harshly. For example, in 1637 William Prynne, Henry Burton and John Bastwick printed pamphlets attacking Laud. All three men were Puritans. They believed that Laud’s changes were making the Protestant Church of England too much like the Catholic Church of Rome. Laud had their ears cut off and their faces branded with a hot iron.

Laud and Charles tried to increase the power of the church in England and Scotland. They also wanted everyone to worship in the same way. Both of these things alarmed many Protestants, particularly the hard-line Protestants known as Puritans. On the other hand, many approved of Laud’s policies. They just disliked the way he clamped down on free speech and treated his critics badly. 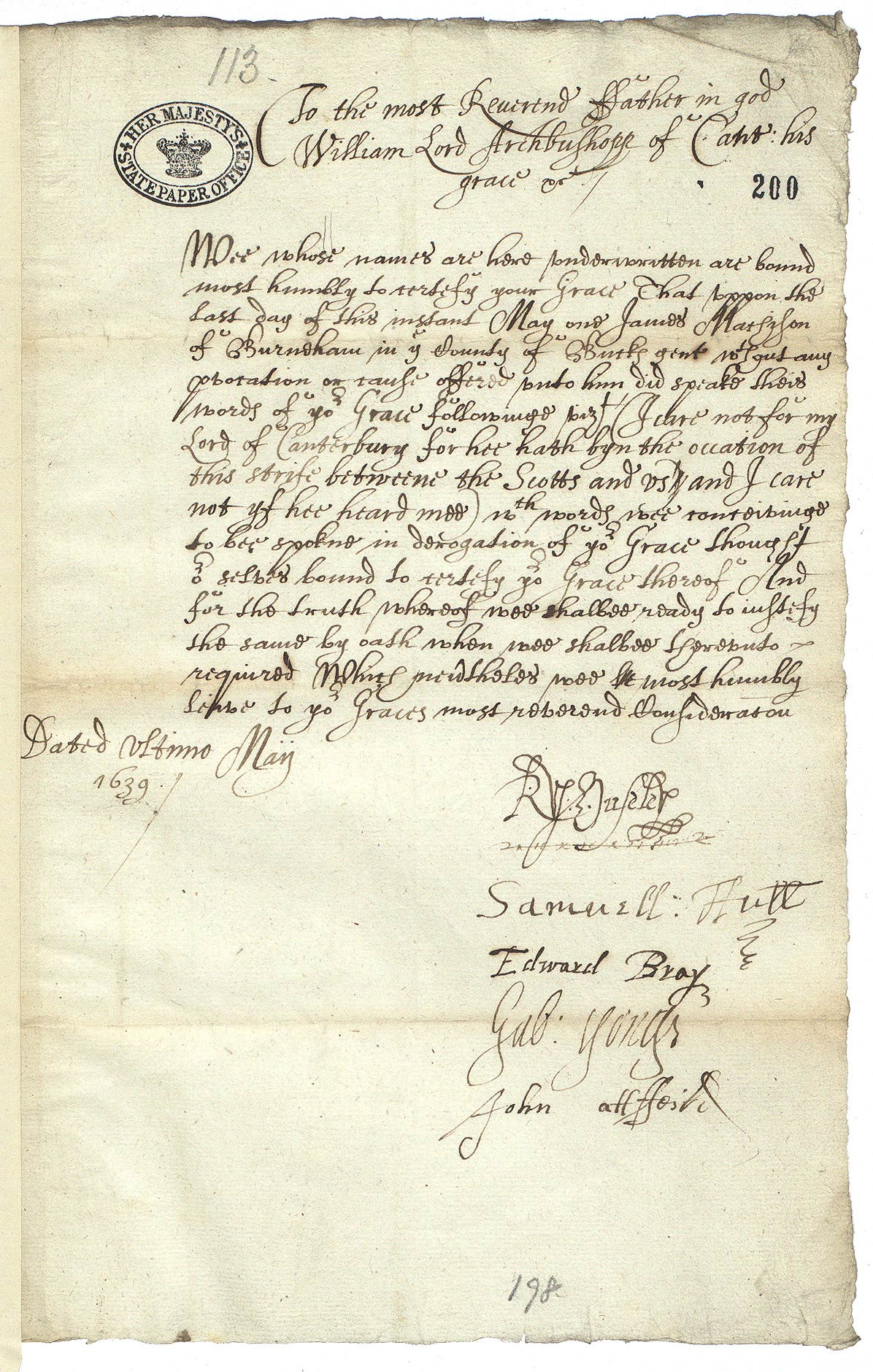 To the most Reverend ffather in god, William Lord, [Laud] Archbishopp of [Canterbury] his grace etc.

Wee whose names are here underwritten are bound most humbly to certify your Grace that uppon the last day of this instant May one James Machison of Burnsham in the County of Bucks gent without any provocation or cause offered unto him did speake theis words of your Grace followinge vizt (I care not for my Lord of Canterbury for hee hath byn the occation of this strife betweene the Scotts and us and I care not yf hee heard mee) which words wee conceivinge to bee spoken in derogation of your Grace thought ourselves bound to certify your Grace thereof,  And for the truth whereof wee shalbee ready to iustify the same by oath when wee shall bee thereunto required Which nevertheles wee most humbly leave to your Grace’s most reverend consideration.

To the most Reverend father in god, William Laud Archbishop of Canterbury his grace.

We whose names are here written below are bound most humbly to certify your Grace that on the last day of May, James Machison of Burnsham in the County of Buckinghamshire, gentleman, without being provoked, said of your Grace: “I care not for my Lord of Canterbury for he has been the cause of this conflict between the Scots and us, and I care not if he heard me.” As these words were critical of your Grace, we thought we should tell you of them. We are ready to swear by oath if your Grace thinks it is necessary in his opinion.

Dated last day of May