This is an extract from a letter written by a gentleman called Thomas Wiseman to Sir John Penington, a senior commander in Charles I’s navy. The document describes rebellion in Ireland, November 1641, Catalogue ref: SP 16/485/58.

The rebellion in Ireland horrified all English Protestants. Charles I and his MPs agreed that an army had to be sent to Ireland. However, this soon became a difficult issue. Leading opponents of Charles I, such as John Pym, did not trust the king. Pym feared that Charles I would use the new army to crush people like him, rather than the rebels in Ireland. He demanded that Parliament should be in charge of the new army and not the king. The argument was never solved. By the time the civil war started in 1642 Ireland was still in the hands of the Catholic rebels. 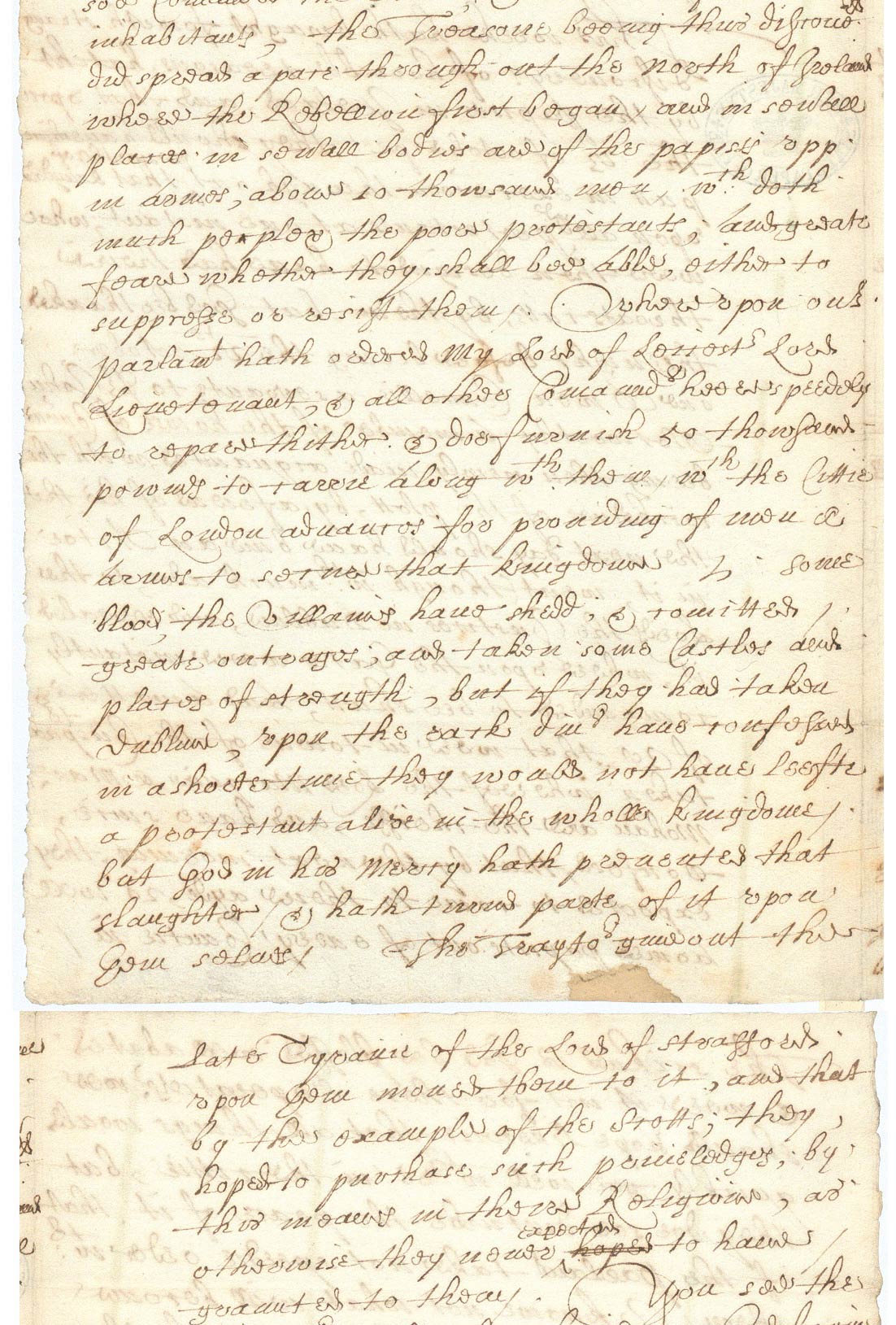 An extract from a letter written by a gentleman called Thomas Wiseman to Sir John Penington, a senior commander in Charles I’s navy, Catalogue ref: SP 16/485/58

The Treasone being thus discovered did spread a pace throughout the north of Ireland where the Rebellion first began and in severall places in severall bodies are of the papists upp in armes, above 10 thowsand men which doth much perplex the poorer protestants, and greate feare whether they shall bee able either to suppresse or resist them. Whereupon our parlament hath addressed my Lord of Leicester Lord Lieutenant & all other Comaunders here ever speedily to repare thither & doe furnish 50 thowsand pownds to carrie along with them which the Cittie of London advances for providing of men & armes to secure that kingdome. Some blood the villains have shedd & committed greate outrages; and taken some Castles and other places of strength, but if they had taken Dublin, upon the rack divers have confessed in a shorte time they would not have leefte a Protestant alive in the wholle kingdome but God in his Mercy hath prevaented that slaughter & hath turned parte of it upon themselves. The Traytors give out the Late Tyranie of the Lord of Strafford upon them moved them to it and that by the examples of the Scotts; they hoped to purchase such priviledges by this meanes in their Religion, as otherwise they never expected to have graanted to them.

[Extra explanations are in square brackets.]

The treason [rebellion], being discovered, spread quickly throughout the north of Ireland, where the rebellion first began. In several places groups of the Catholics are up in arms, more than 10,000 men. This worries the poorer Protestants, and there is great fear whether they shall be able either to stop or resist them. Our Parliament directed my Lord of Leicester, Lord Lieutenant, and all other commanders here to quickly go there. It provided £50,000 to carry along with them, which the city of London advanced for providing men and arms to secure that kingdom. The villains have shed some blood and committed great outrages and taken some castles and other strongholds. But if they had taken Dublin, various people have confessed upon the rack [under torture] that they would not have left a Protestant alive in the whole kingdom. But God in his Mercy has prevented that slaughter and has turned part of it upon the rebels. The traitors said that the harsh rule of Lord Strafford over them drove them to it and also the example set by the Scots [the Scottish rebellion]. By this means they hoped to gain privileges in their religion, which otherwise they never expected to have granted to them.