Petition to Charles I

This document is a petition sent to Charles I and expresses the grievances of the City of London I on 24 September 1640, Catalogue ref:  National Archives Rare Books Collection (John Rushworth, Historical Collections, Vol III, 1639-1640, p.1263. Published in London, 1680-1701).

The citizens of London were also more politically active than any other part of the country and radical (wanting big changes). This helps to explain why the city sent several petitions to Charles during this period. London had more Protestant hardliners (Puritans) than other parts of the country. It is not surprising that London took the side of Parliament when war broke out in 1642. 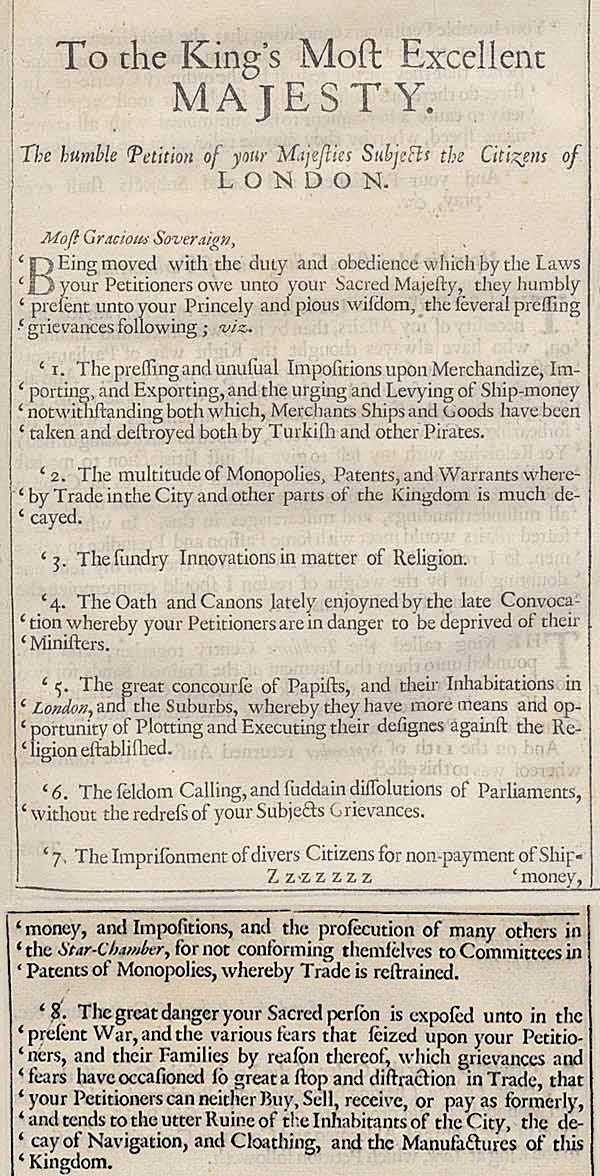 A petition from the citizens of London, September 1640.

To the King’s Most Excellent MAJESTY.

The humble Petition of your Majesties Subjects the Citizens of LONDON.

Being moved with the duty and obedience by which the Laws your Petitioners owe unto your Sacred Majesty, they humbly present unto your Princely and pious wisdom, the several pressing grievances following; viz.

The pressing and unusual Impositions upon Merchandize, Importing and Exporting, and the urging and Levying of Ship-money, notwithstanding both which, Merchants Ships and Goods have been taken and destroyed both by Turkish and other Pirates.

The multitude of Monopolies, Patents and Warrants, whereby Trade in the City and other parts of the Kingdom is much decayed.

The sundry Innovations in matters of Religion.

The Oath and Canons lately enjoyned by the late Convocation whereby your Petitioners are in danger to be deprived of their Ministers.

The great concourse of Papists, and their Inhabitations in London, and the Suburbs, whereby they have more means and opportunity of Plotting and Executing their designs against the Religion established.

The seldom Calling, and suddain dissolutions of Parliaments, without the redress of your Subjects Grievances.

The Imprisonment of divers Citizens for non-payment of Ship-Money and Impositions, and the prosecution of many others in the Star-Chamber, for not conforming themselves to Committees in Patents and Monopolies, whereby Trade is restrained.

The great danger your Sacred person is exposed unto in the present War, and the various fears that seized upon your Petitioners, and their Families by reason thereof, which grievances and fears have occasioned so great a stop and direction in Trade, that your Petitioners can neither Buy, Sell, receive, or pay as formerly, and tends to the utter Ruine of the Inhabitants of the City, the decay of Navigation, and Cloathing, and the Manufactures of this Kingdom.

[Extra explanations are in square brackets.]

To the King’s most excellent Majesty.

The humble petition of your Majesty’s subjects, the citizens of London.

Because of the duty and obedience which we owe to your sacred Majesty, we humbly present to your princely wisdom the following complaints:

The demanding and unusual taxes upon goods, importing and exporting, and the taking of ship money [a type of tax], despite merchants’ ships and goods having been taken and destroyed by Turkish and other pirates.

The many changes in matters of religion.

The recent changes in church rules which mean we may be deprived of our ministers.

The great crowd of Catholics living in London and the suburbs, where they have more means and opportunity of plotting against the established religion.

The seldom calling and sudden ending of Parliaments, without sorting out your subjects’ complaints.

The imprisonment of various citizens for non-payment of ship money and taxes, and the prosecution of many others in the Star Chamber for not following the rules regulating trade.

The great danger you are exposed to in the present war, and the various fears that we and our families have because of the war, have led to such a drop in trade that we cannot buy, sell, receive or pay as before. This tends to the utter ruin of the people living in the city, the decline of shipping and cloth making and the products of this kingdom.