In 1639 Charles I’s kingdoms were very tense. Charles was facing a major rebellion in Scotland. There was also tension in England. One of the biggest concerns was religion. The Archbishop of Canterbury, William Laud, was bringing in changes to the English church that some people were against.

During the 1630s Charles I and William Laud brought in new types of church services. Charles also gave greater power and wealth to the church. To some Protestants (especially hard-line Protestants, called Puritans), his actions seemed to be making the Church of England more like the Roman Catholic Church. They began to criticise Charles. Charles I had no time for opponents of his policies.

Charles ordered his officials to look out for people who might oppose him. The person being reported in this source was probably a Puritan who was against the changes that Charles and William Laud were bringing into the church. 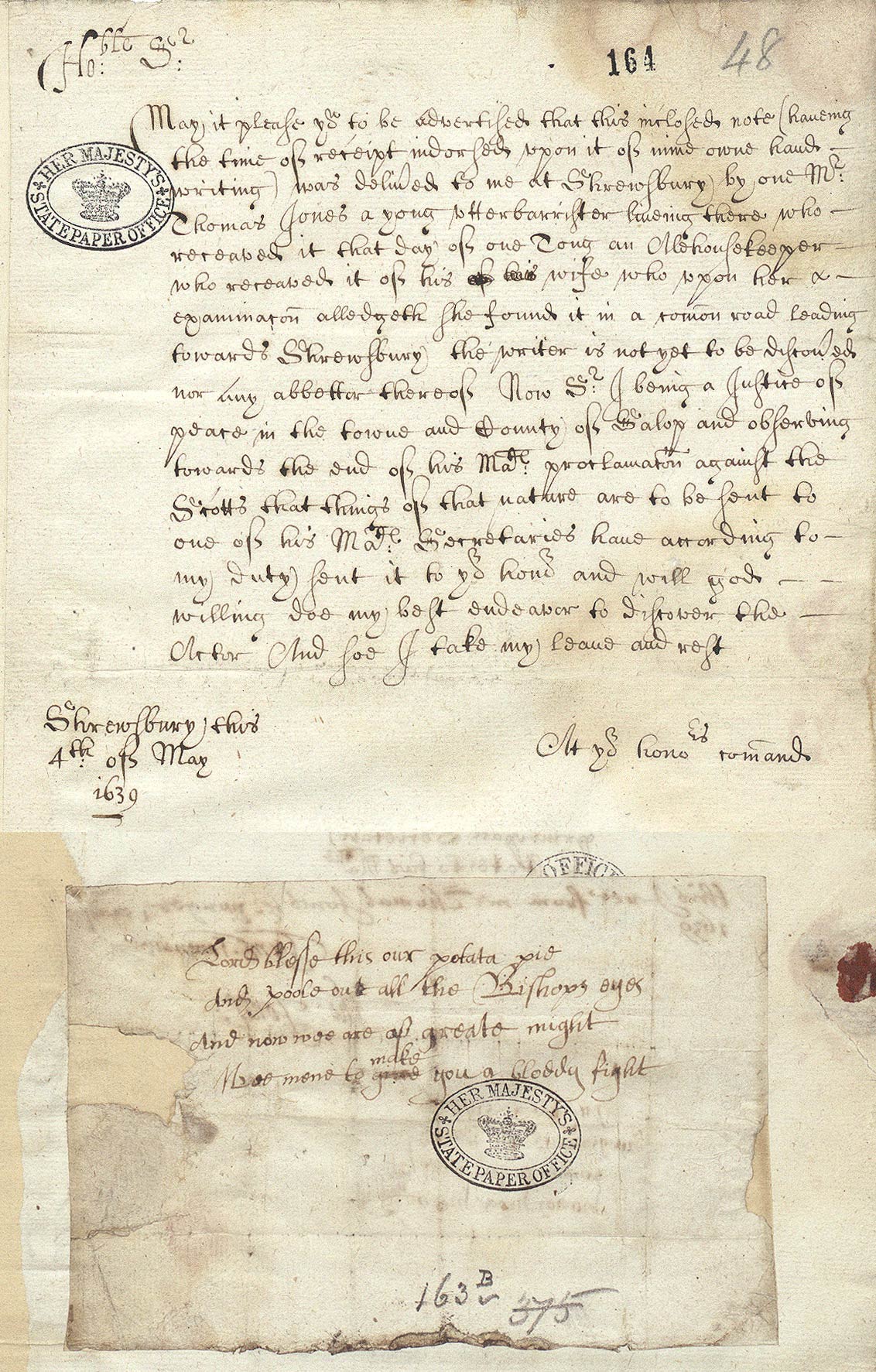 May it please you to be advertised that this inclosed note (haveing the time of receipt indorsed upon it of mine owne hand writing) was delivered to me at Shewsbury by one Mr Thomas Jones a young utter barrister liveing there who recaved it that day of one Tong an Alehousekeeper who receaved it of his wife who upon her examinacion alledgeth she found it in a comon road leading towards Shrewsbury the writer is not yet to be discovered nor any abbetter thereof. Now Sir I being a Justice of Peace in the towne and County of Salop [Shropshire] and observing towards the end of His Majesties proclamation against the Scotts that things of that nature are to be sent to one of his Majesties Secretaries have according to my duty sent it your hand and will God willing doe my best endeavor to discover the Arthor. …

Lord blesse this our potata pie

And peele out all the Bishope eyes

Wee mene to make you a bloddy fight

May it please you to know that this enclosed note (with the time of receipt on it in my own handwriting) was delivered to me at Shrewsbury by Mr Thomas Jones, a young trainee lawyer living there. He received it that day from Tong, an alehouse keeper, who got it from his wife, who said she found it in a road leading towards Shrewsbury. The writer is not yet found, nor anyone who helped the writer. Now Sir, I am a Justice of the Peace in the town and county of Shropshire. Seeing towards the end of His Majesty’s announcement against the Scots that things of this nature are to be sent to one of His Majesty’s secretaries, according to my duty, I have sent it to you. God willing, I will do my best to discover the author. …

Lord bless this our potato pie

And pull out all the Bishop’s eyes

We mean to make you a bloody fight