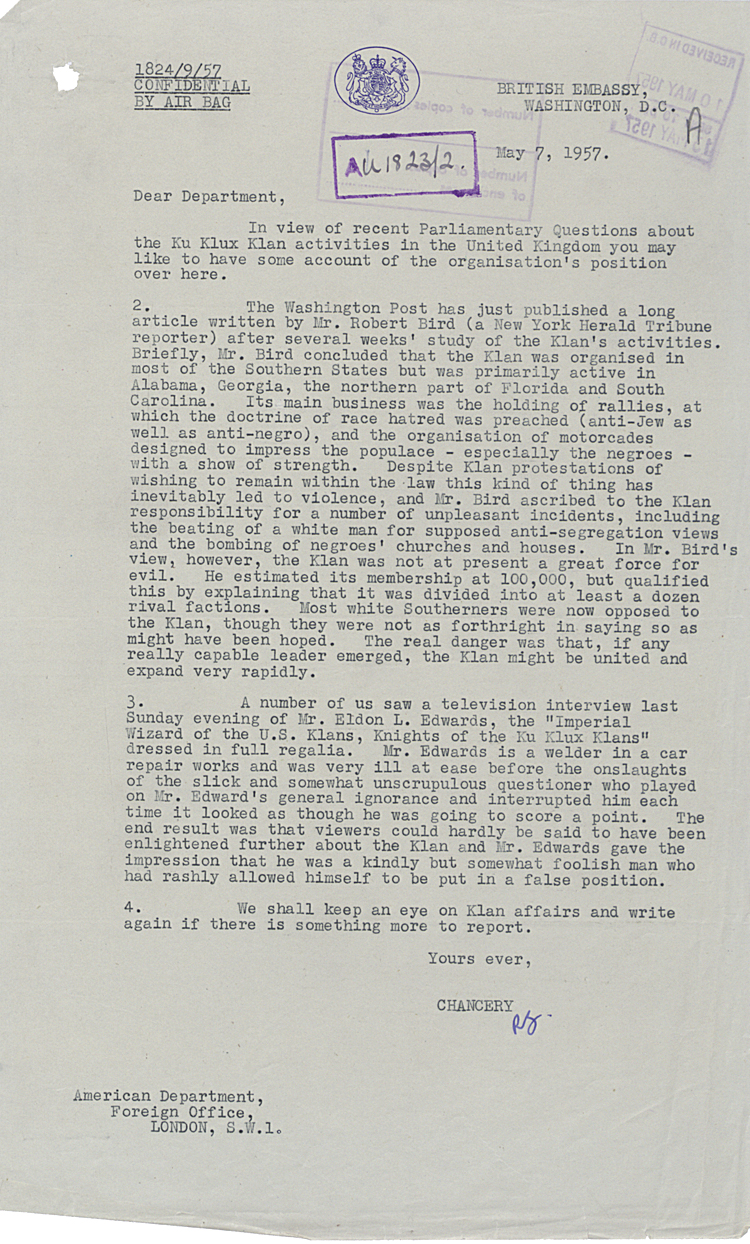 In view of recent Parliamentary Questions about the Ku Klux Klan activities in the United Kingdom you may like to have some account of the organisation’s position over here.

2. The Washington Post has just published a long article written by Mr. Robert Bird (a New York Herald Tribune reporter) after several weeks’ study of the Klan’s activities. Briefly, Mr. Bird concluded that the Klan was organised in most of the Southern States but was primarily active in Alabama, Georgia, the northern part of Florida and South Carolina. Its main business was the holding of rallies, at which the doctrine of race hatred was preached (anti-Jew as well as anti-negro), and the organisation of motorcades designed to impress the populace – especially the negroes – with a show of strength. Despite Klan protestations of wishing to remain within the law this kind of thing has inevitably led to violence, and Mr. Bird ascribed to the Klan responsibility for a number of unpleasant incidents, including the beating of a white man for supposed anti-segregation views and the bombing of negroes’ churches and houses. In Mr. Bird’s view, however, the Klan was not at present a great force for evil. He estimated its membership at 100,000, but qualified this by explaining that it was divided into at least a dozen rival factions. Most white Southerners were now opposed to the Klan, though they were not as forthright in saying so as might have been hoped. The real danger was that, if any really capable leader emerged, the Klan might be united and expand very rapidly.

3. A number of us saw a television interview last Sunday evening of Mr. Eldon L. Edwards, the “Imperial Wizard of the U.S. Klans, Knights of the Ku Klux Klans” dressed in full regalia. Mr. Edwards is a welder in a car repair works and was very ill at ease before the onslaughts of the slick and somewhat unscrupulous questioner who played on Mr. Edward’s general ignorance and interrupted him each time it looked as though he was going to score a point. The end result was that viewers could hardly be said to have been enlightened further about the Klan and Mr. Edwards gave the impression that he was a kindly but somewhat foolish man who had rashly allowed himself to be put in a false position.

4. We shall keep an eye on Klan affairs and write again if there is something more to report.