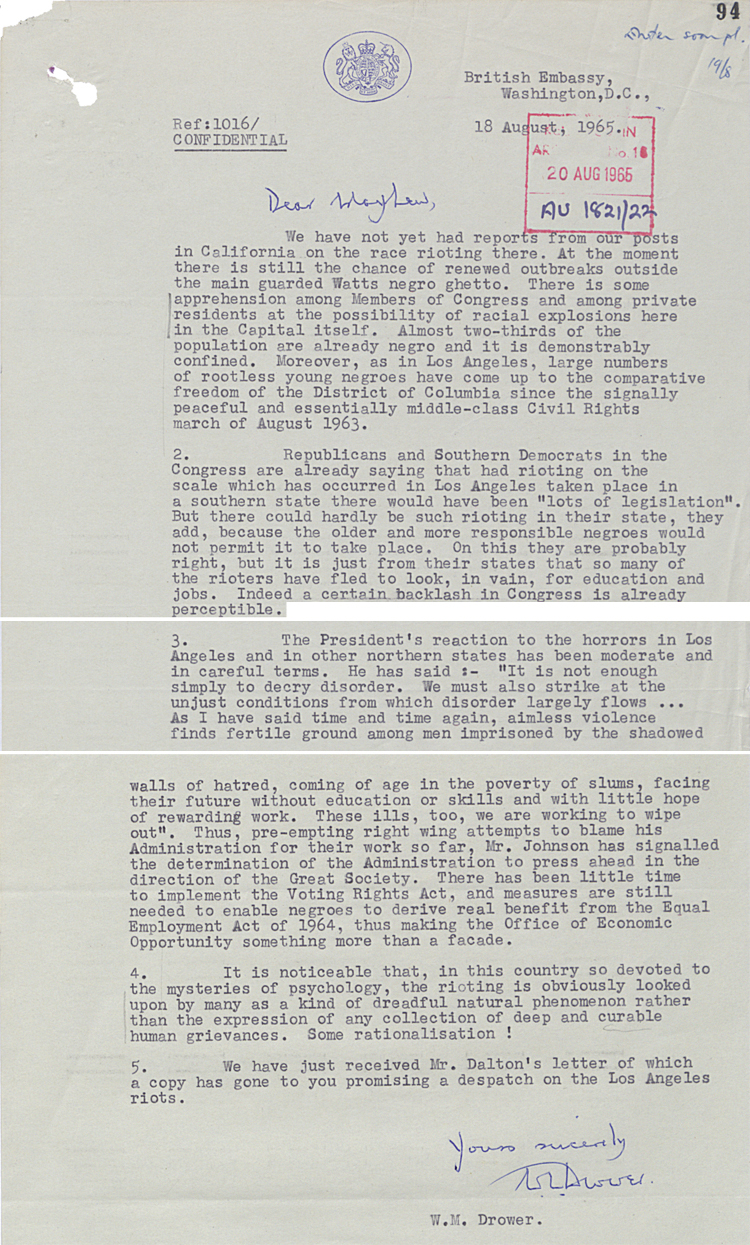 Letter from British Embassy Washington to Foreign Office on the reaction to California rioting, 18 August 1965 (FO 371/179611)

We have not yet had reports from our posts in California on the race rioting there. At the moment there is still the chance of renewed outbreaks outside the main guarded Watts negro ghetto. There is some apprehension among Members of Congress and among private residents at the possibility of racial explosions here in the Capital itself. Almost two-thirds of the population are already negro and it is demonstrably confined. Moreover, as in Los Angeles, large numbers of rootless young negroes have come up to the comparative freedom of the District of Columbia since the signally peaceful and essentially middle-class Civil Rights march of August 1963.

2. Republicans and Southern Democrats in the Congress are already saying that had rioting on the scale which has occurred in Los Angeles taken place in a southern state there would have been “lots of legislation”. But there could hardly be such rioting in their state, they add, because the older and more responsible negroes would not permit it to take place. On this they are probably right, but it is just from their states that so many of the rioters have fled to look, in vain, for education and jobs. Indeed a certain backlash in Congress is already perceptible.

3. The Presidents reaction to the horrors in Los Angeles and in other northern states has been moderate and in careful terms. He has said :- “It is not enough simply to decry disorder. We must also strike at the unjust conditions from which disorder largely flows… As I have said time and time again, aimless violence finds fertile ground among men imprisoned by the shadowed walls of hatred, coming of age in the poverty of slums, facing their future without education or skills and with little hope of rewarding work. These ills, too, we are working to wipe out”. Thus, pre-empting right wing attempts to blame his Administration for their work so far, Mr. Johnson has signalled the determination of the Administration to press ahead in the direction of the Great Society. There has been little time to implement the Voting Rights Act, and measures are still needed to enable negroes to derive real benefit from the Equal Employment Act of 1964, thus making the Office of Economic Opportunity something more than a facade.

4. It is noticeable that, in this country so devoted to the mysteries of psychology, the rioting is obviously looked upon by many as a kind of dreadful natural phenomenon rather than the expression of any collection of deep and curable human grievances. Some rationalisation!

5. We have just received Mr. Dalton’s letter of which a copy has gone to you promising a despatch on the Los Angeles riots.