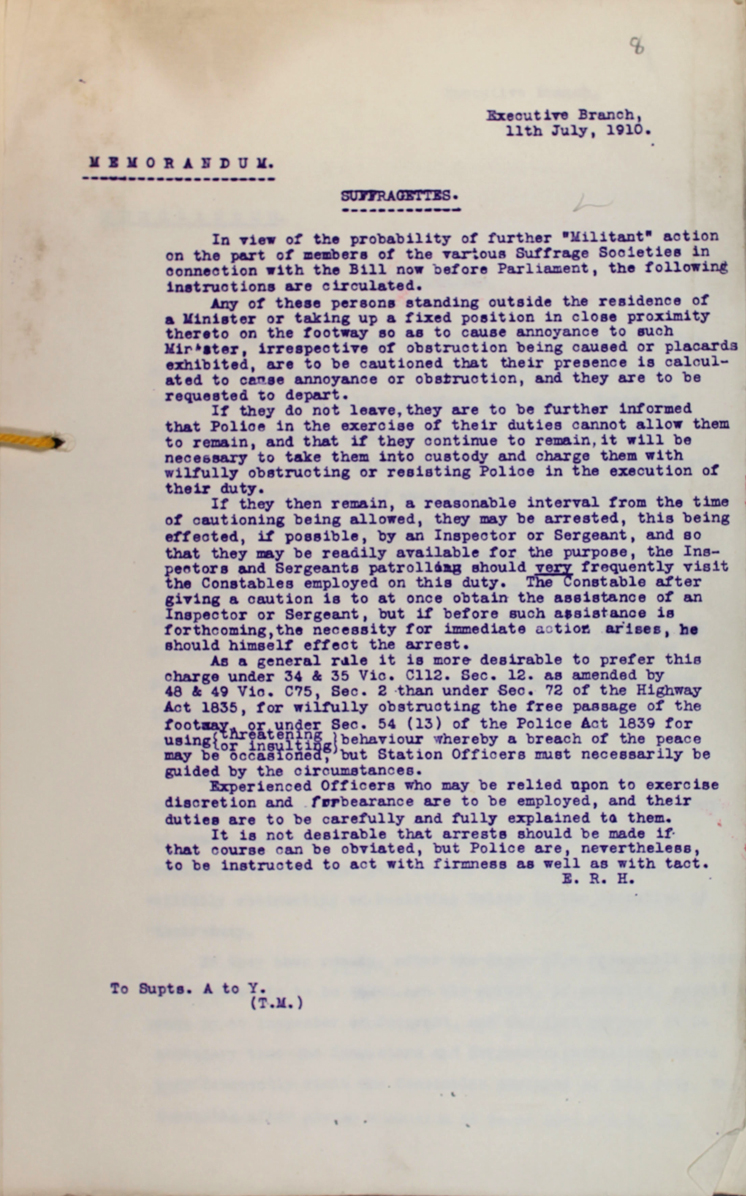 In view of the probability of further “Militant” action on the part of members of the various Suffrage Societies in connection with the Bill now before Parliament, the following instructions are circulated.

Any of these persons standing outside the residence of a Minister or taking up a fixed position in close proximity thereto on the footway so as to cause annoyance to such Minister, irrespective of obstruction being caused or placards exhibited, are to be cautioned that their presence is calculated to cause annoyance or obstruction, and they are to be requested to depart.

If they then remain, a reasonable interval from the time of cautioning being allowed, they may be arrested, this being effected, if possible, by an Inspector or Sergeant, and so that they may be readily available for the purpose, the Inspectors and Sergeants patrolling should very frequently visit the Constables employed in this duty. The Constable after giving a caution is to at once obtain the assistance of an Inspector or Sergeant, but if before such assistance is forthcoming, the necessity for immediate action arises, he should himself effect the arrest.

As a general rule, it is more desirable to prefer this charge under 34 & 35 Vic.C112. Sec.12 as amended by 48 & 49 Vic. C75, Sec. 2 than under Sec. 72 of the Highway Act 1835, for wilfully obstructing the free passage of the footway or under Sec 54 (13) of the Police Act 1839 for using threatening or insulting behaviour whereby a breach of peace may be occasioned, but Station Officers must necessarily be guided by the circumstances.

Experienced Officers who may be relied upon to exercise discretion and forbearance are to be employed, and their duties are to be carefully and fully explained to them.

It is not desirable that arrests should be made if that course can be obviated [avoided], but Police are, nevertheless, to be instructed to act with firmness as well as with tact.