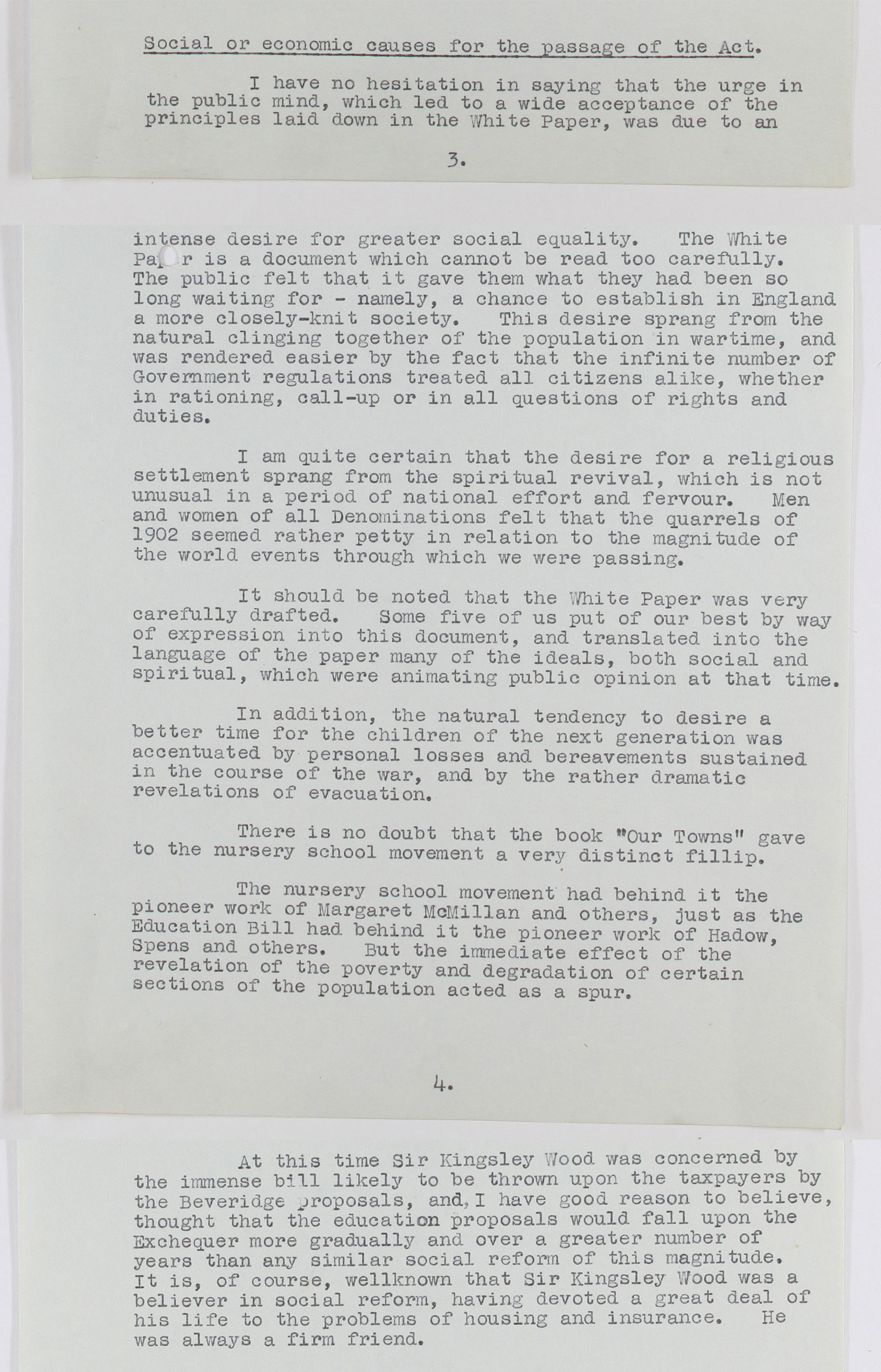 Extract from a note from RAB Butler to Dr. Sophia Weitzman who was writing an official history of state education, May 1945 (ED 136/692)

Social or economic causes for the passage of the Act [Butler Education Act, 1944]

I have no hesitation in saying that the urge in the public mind, which led to a wide acceptance of the principles laid down in the White Paper, was due to an intense desire for greater social equality. The White Paper is a document which cannot be read too carefully. The public felt that it gave them what they had been so long waiting for – namely, a chance to establish in England a more closely-knit society. This desire sprang from the natural clinging together of the population in wartime, and was rendered easier by the fact that the infinite number of Government regulations treated all citizens alike, whether in rationing, call-up or in all questions of rights and duties.

I am quite certain that the desire for a religious settlement sprang from the spiritual revival, which is not unusual in a period of national effort and fervour. Men and women of all Denominations felt that the quarrels of 1902 seemed rather petty in relation to the magnitude of the world events through which we were passing.

It should be noted that the White Paper was very carefully drafted. Some five of us put our best by way of expression into this document, and translated into the language of the paper many of the ideals, both social and spiritual, which were animating public opinion at that time.

In addition, the natural tendency to desire a better time for the children of the next generation was accentuated by personal losses and bereavements sustained in the course of the war, and by the rather dramatic revelations of evacuation.

There is no doubt that the book “Our Towns” gave to the nursery school movement a very distinct fillip.

At this time Sir Kingsley Wood was concerned by the immense bill likely to be thrown upon the tax players by the Beveridge proposals, and, I have good reason to believe, thought that the education proposals would fall upon the Exchequer more gradually and over a greater number of years than any similar social reform of this magnitude. It is, of course, well known that Sir Kingsely Wood was a believer in social reform, having devoted a great deal of his life to the problems of housing and insurance. He was always a firm friend.