As the First World War raged, governments harnessed modern technologies to give them an advantage in conflict. New inventions – from tanks to Zeppelins – appeared on the battlefield, while existing technologies were adapted to fit the needs of the British war effort.

As a result of the need to exchange information faster and more efficiently, telecommunications advanced rapidly in this time. The Engineering Department of the General Post Office, a government body that became British Telecom (BT), played a major role in innovation in telecommunications, as well as supplying the British military and civilians with ways of communicating.

The First World War famously saw the creation of the Royal Air Force. Air warfare demanded further evolution in telecommunications: keeping pilots updated while in the air with intelligence-gathering and decision-making was crucial to operational success. Images from a 1918 handbook of airborne communication equipment indicate the way in which telecommunications evolved in line with military technology. 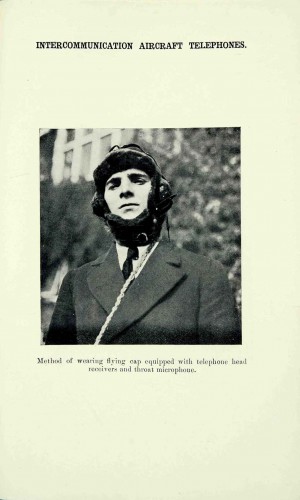 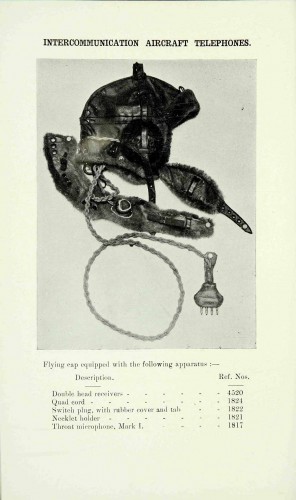 Image from a 1918 handbook with examples of aircraft telecommunications headwear (cat ref: AIR 10/100) 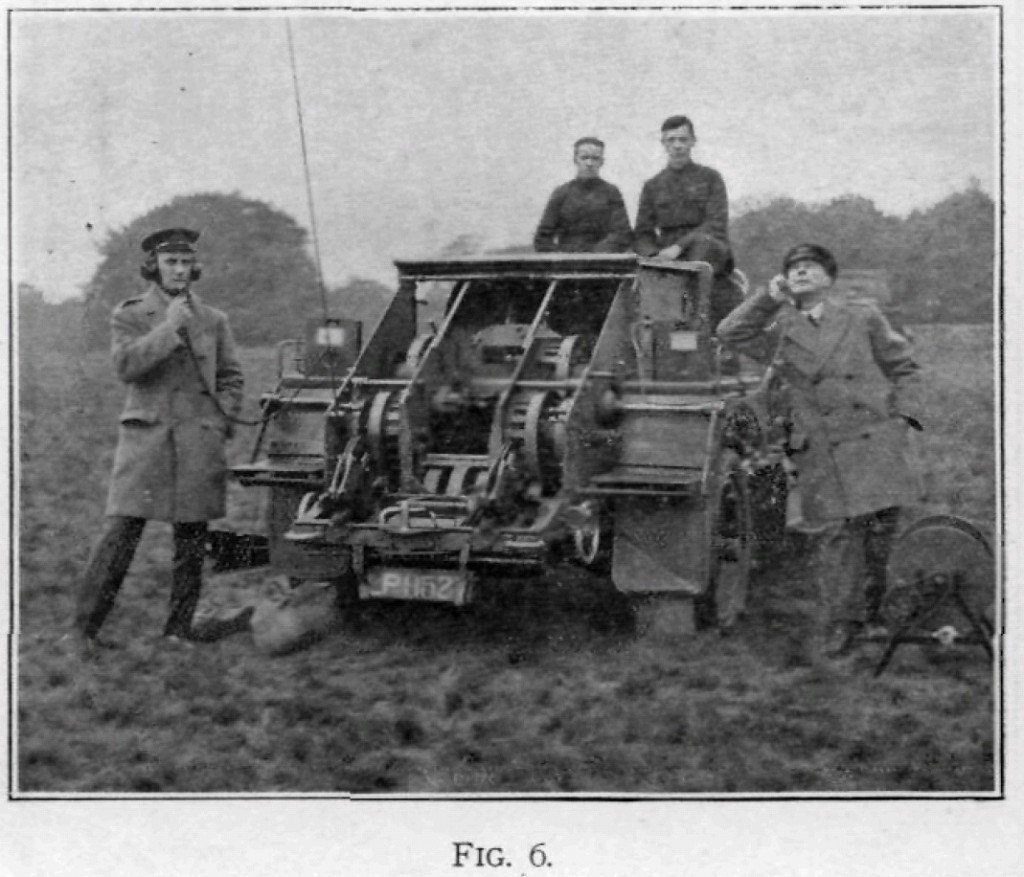 The Engineering Department was not only important for the Western Front; it had a crucial role in keeping Britain as safe as possible. Rigid Inflatable Airships  – also known as ‘Zeppelins’ after Count Ferdinand von Zeppelin, the German pioneer of the airship – were a source of widespread fear in mainland Britain; the German army and navy used them as bombers and scouts.

The Engineering Department provided key equipment to intercept and report the wireless signals that enemy aircraft, including Zeppelins, often used to navigate. This was done at the Department’s ‘Direction Finding Stations’ at Peterborough, Seaham Harbour, Westgate and Falkirk in Scotland. When the location of enemy aircraft was identified, the information was wired to the Intelligence Department of the War Office. Sir William Slingo’s report includes a map indicating the routes of Zeppelins that took part in the raid of 2 and 3 May 1917. 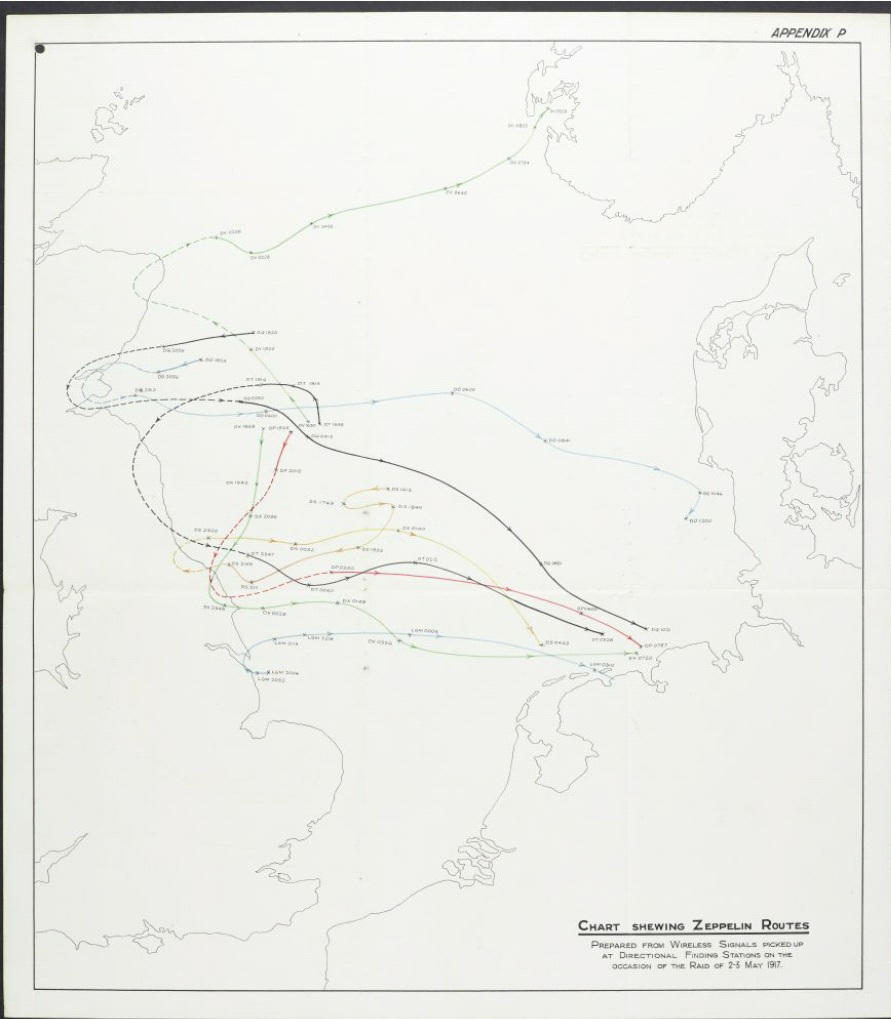 Cutting off communications altogether was another way to disrupt an enemy attack. A map from the Ministry of Munitions file indicates, in red, where communications would be suspended in times of an emergency – that is, if the German army successfully landed in Britain. 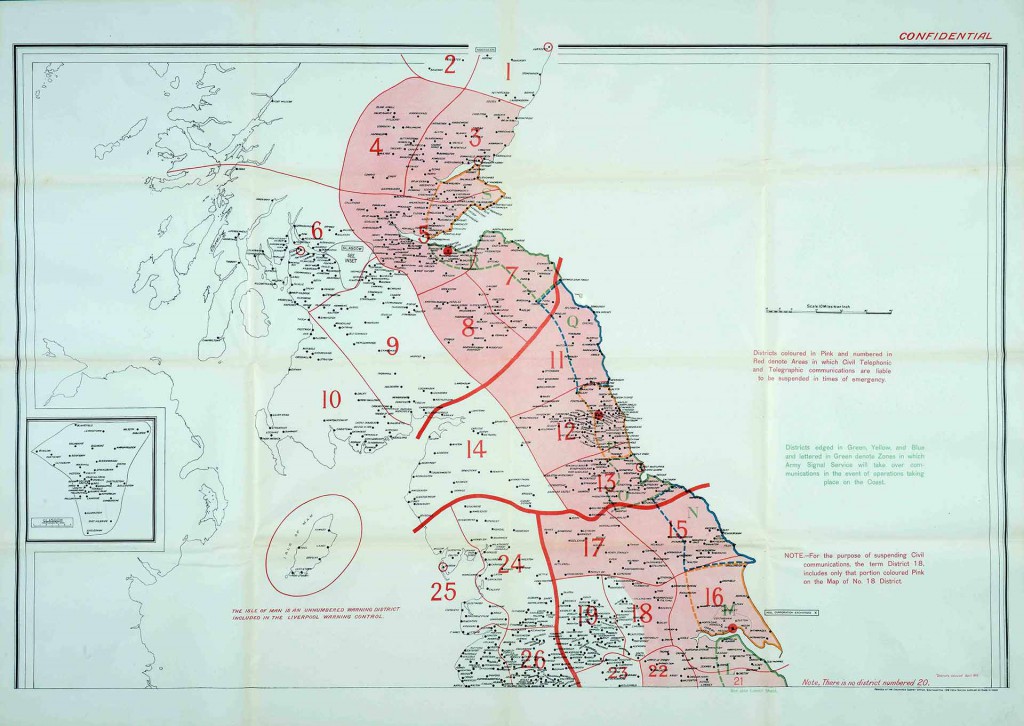 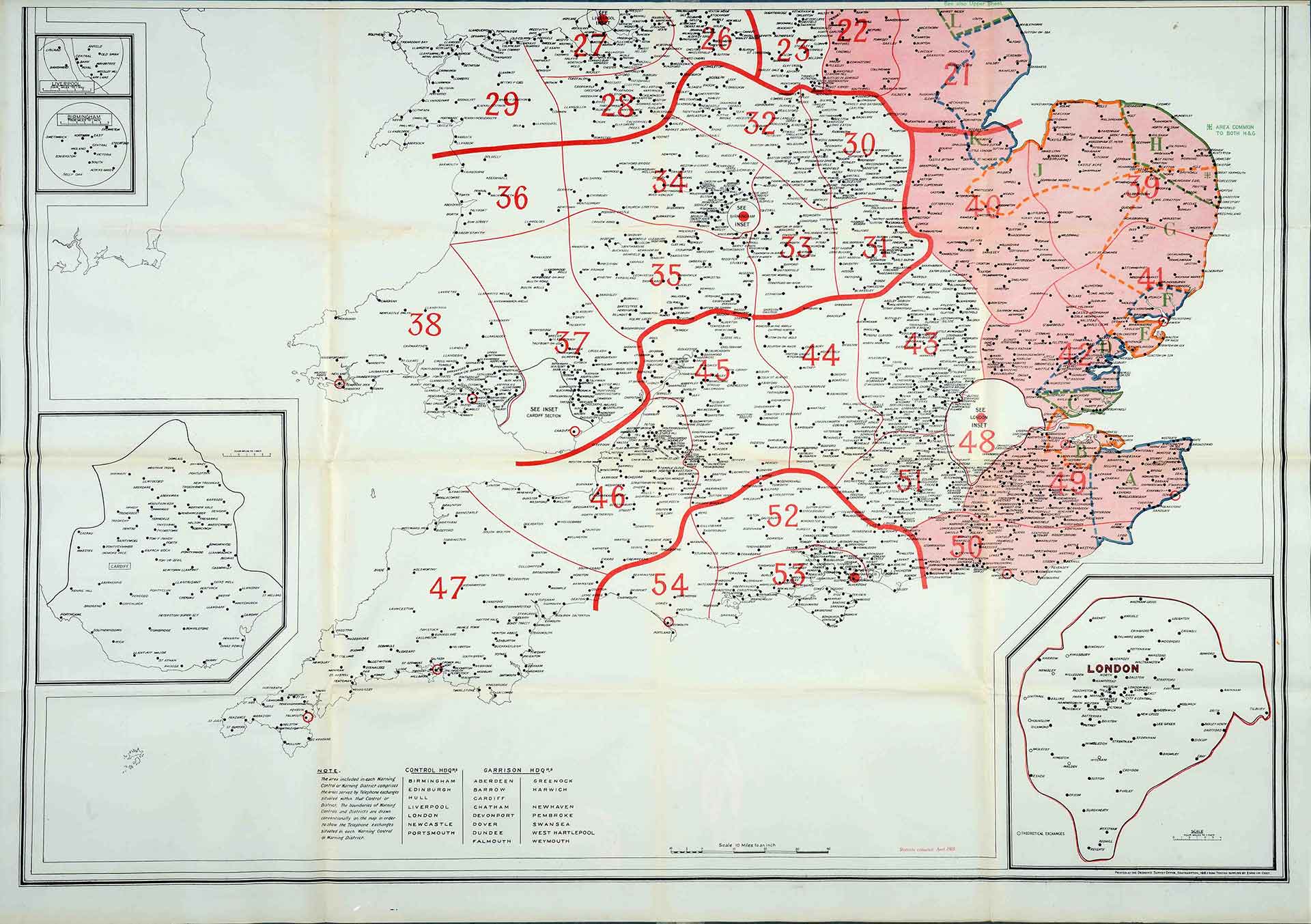 Under emergency protocols, all communications would be suspended in Ireland and on the majority of Britain’s eastern coastline – from Dundee to Dover – if a German invasion was successful. In the event of invasion, responsibility for communications would transfer from the Engineering Department to the Army Signal Service. 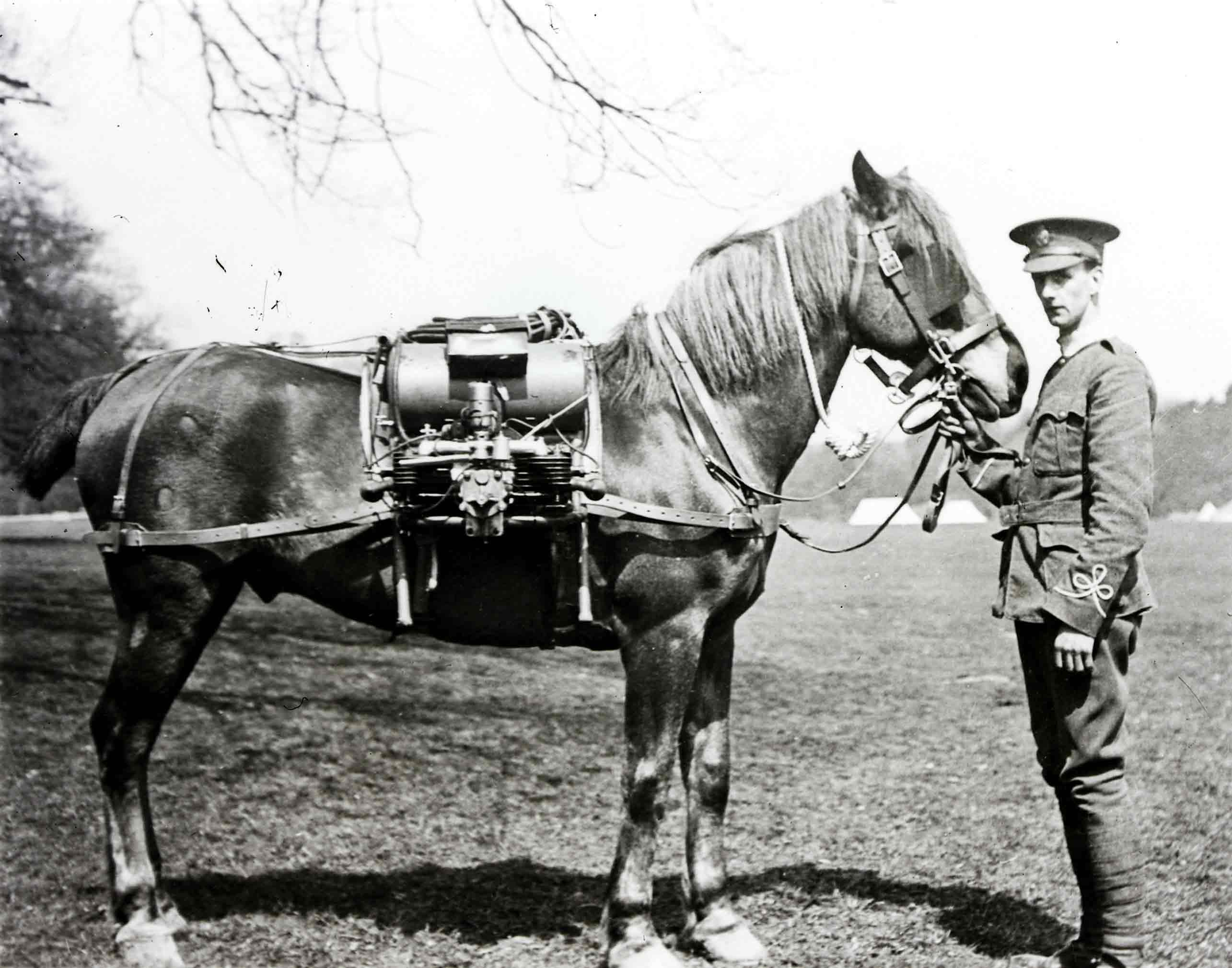 Major T F Purves, commissioned officer in the Royal Engineers, worked with Post Office engineers to oversee the provision of over 200 items of special telecommunications apparatus. These were adapted to fit the needs of British soldiers in the trenches and ranged from modified cavalry field radios to field communication devices for gun spotters. 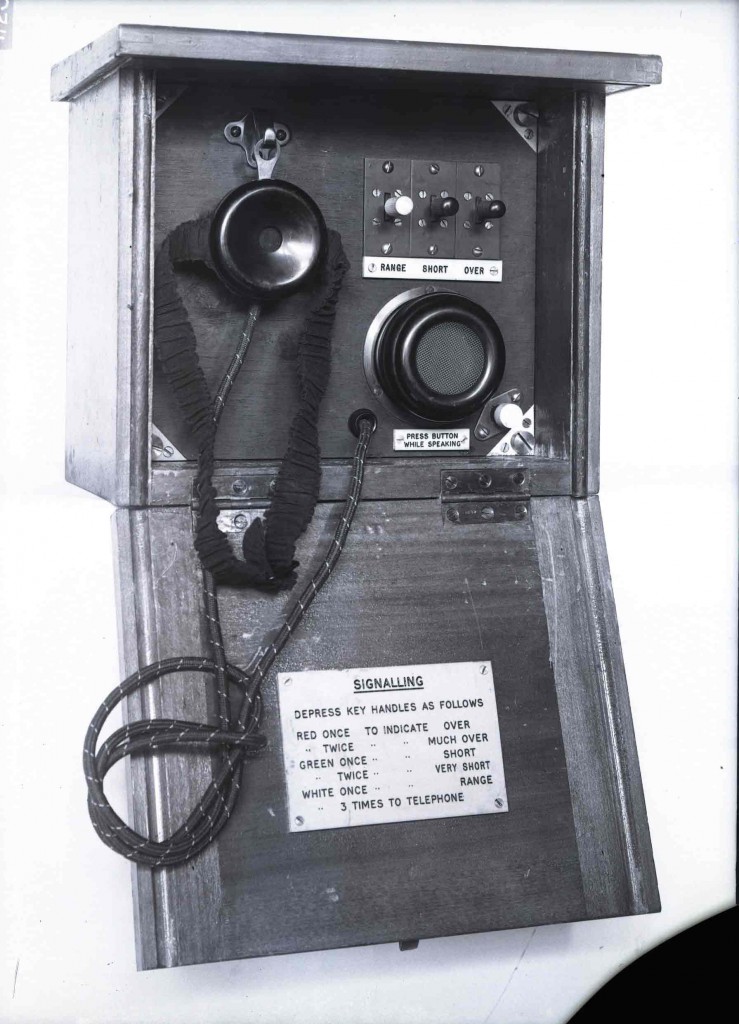 This improved telecommunications equipment made it easier for troops and officers to get information up and down the chain of command; from forces headquarters to the front line and back. One important piece of apparatus for sending intelligence and operational updates was the portable morse code machine, used by the British army throughout the conflict and often in trench holes at the heart of the battle. 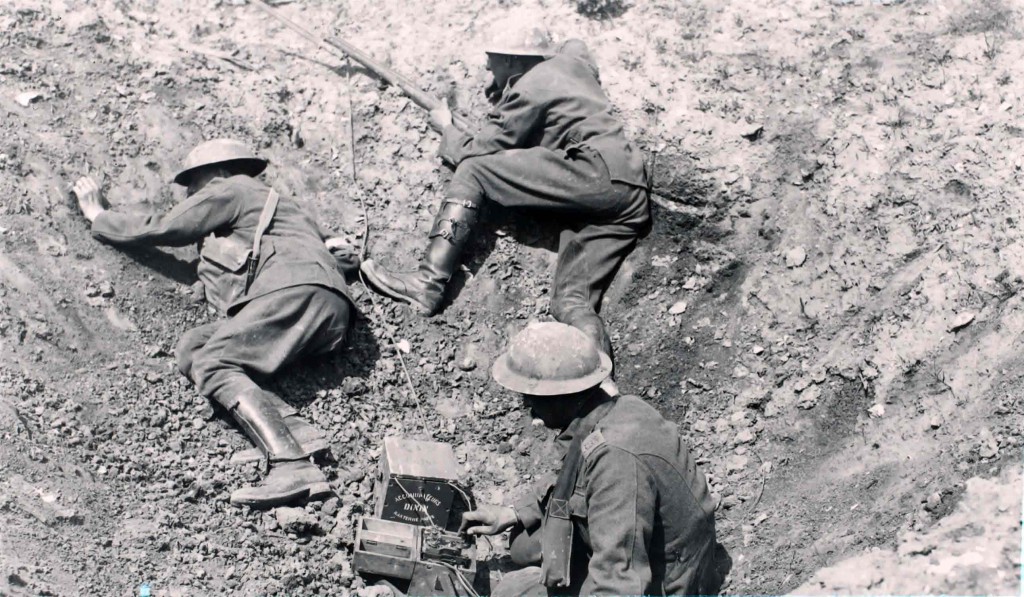 During this period, work was also being done to improve the military’s ability to attack and defend. One of these techniques was sound ranging, a process that uses sound to work out the position and coordinates of enemy artillery firing – you can see the devices used to conduct experiments into sound ranging below in fascinating photographs from the Ministry of Aviation. Within a report held by BT Archives covering the Engineering Department’s work during the First World War, a letter written by General Douglas Haig, Commanding-in-Chief, British Armies in France, to Joseph Pease, Postmaster General, thanks officers for the great assistance provided in connection with sound ranging. 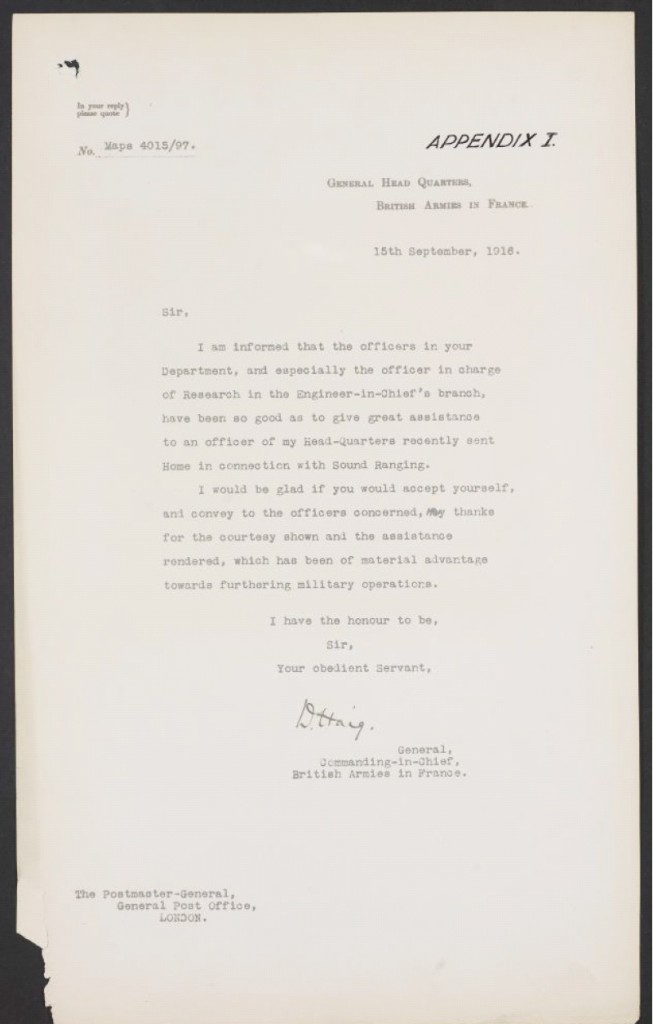 Thanks for the courtesy shown and the assistance rendered, which has been of material advantage towards furthering military operations. 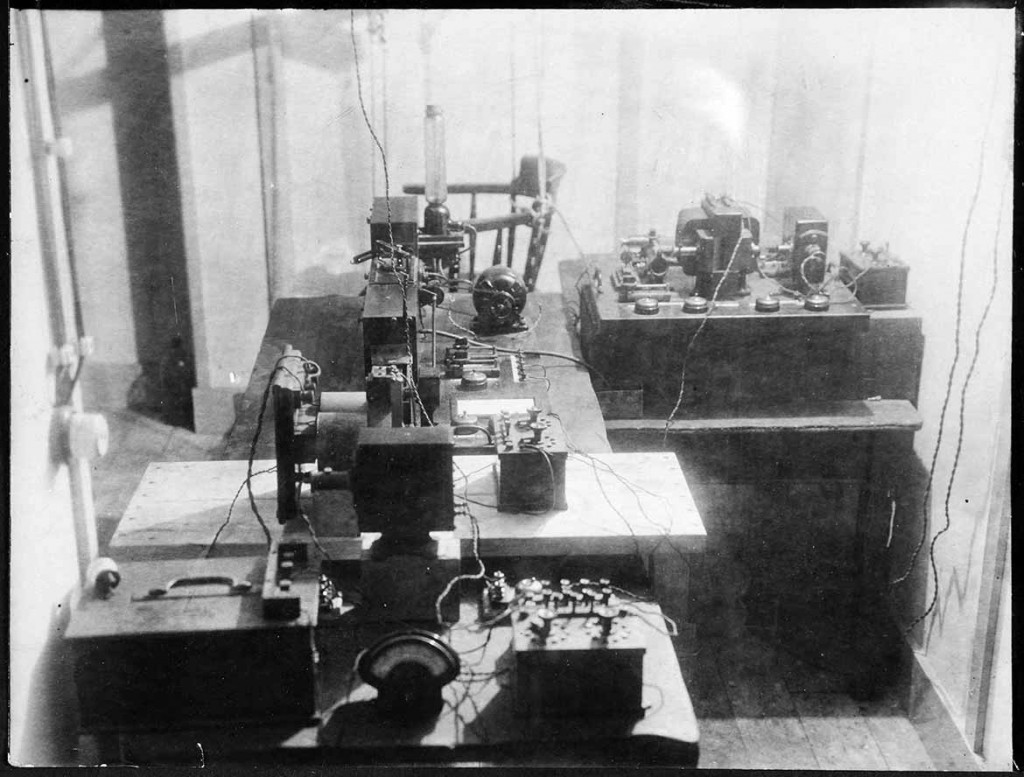 Records belonging to the Geographical Section of the General Staff, a department of the War Office, also reveal some wonderful illustrative diagrams. The diagram below, detailing instructions on how to determine the location of gun fire, demonstrates the complexity of this procedure prior to the development of sound ranging equipment. 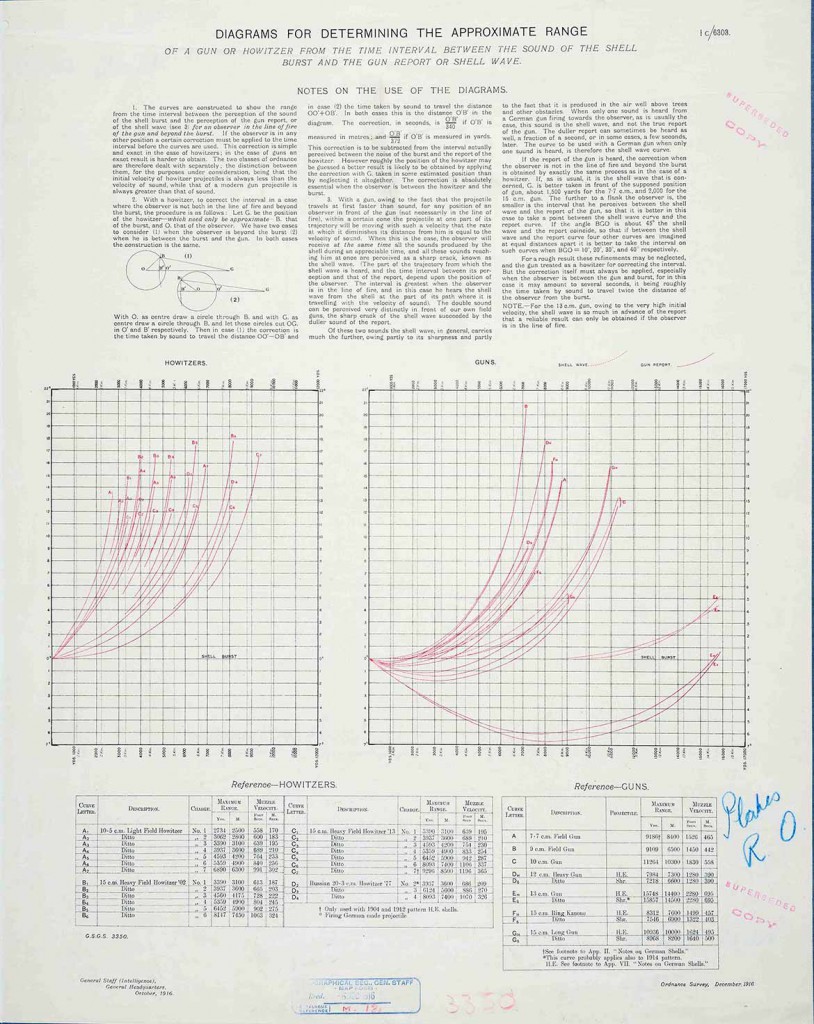 Diagram from the Geographical Section of the General Staff (cat ref: WO 297/73)

The first cross-channel cable in the English Channel was put in place in 1850 and by the turn of the 20th century it was filled with a criss-cross of cables going north-south as well as west-east. The Engineering Department administered and staffed the ships that laid and maintained the cables required for trans-channel telecommunications. According to Sir William Slingo’s report, when war between the United Kingdom and Germany seemed imminent, ‘the cables connecting England and Germany were disconnected… but on receipt of remonstrance from Germany, communication was temporarily restored’. The General Post Office cable ship ‘Alert’ manned by Engineering Department staff duly cut the cable again when war was announced officially just hours later.

The initiative of laying cable was not without risk. The cable ship ‘Monarch’ was leased to the Grand Fleet of the Royal Navy and based at Scapa Flow. It struck a mine on 8 September 1915 while repairing the cable between Beachy Head and Havre, and sunk almost immediately. Three men died.

There are several references to the bravery of the men who staffed the cable ships. Letters from the records of the Treasury highlight the responsibilities that were placed upon these men: in some cases, men of a relatively junior rank had to take on the role of a much higher rank, for example Commander or Chief Officers, for a reasonable period of time. Operations could be dangerous, with the risk of hostile action. With such undertakings, it was deemed fair to provide men with ‘substitution payments’ for their work. 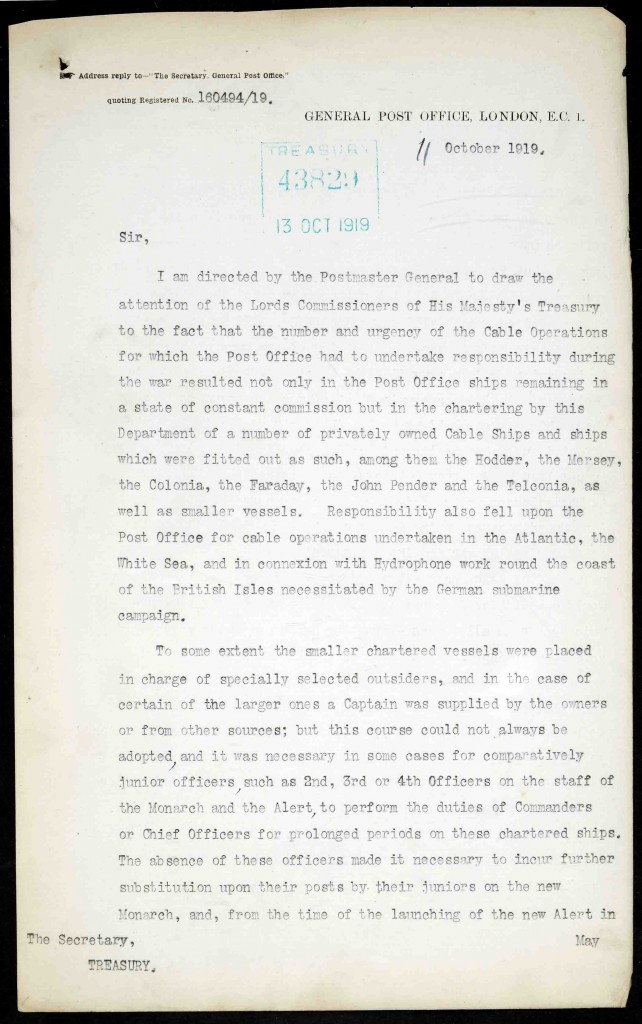 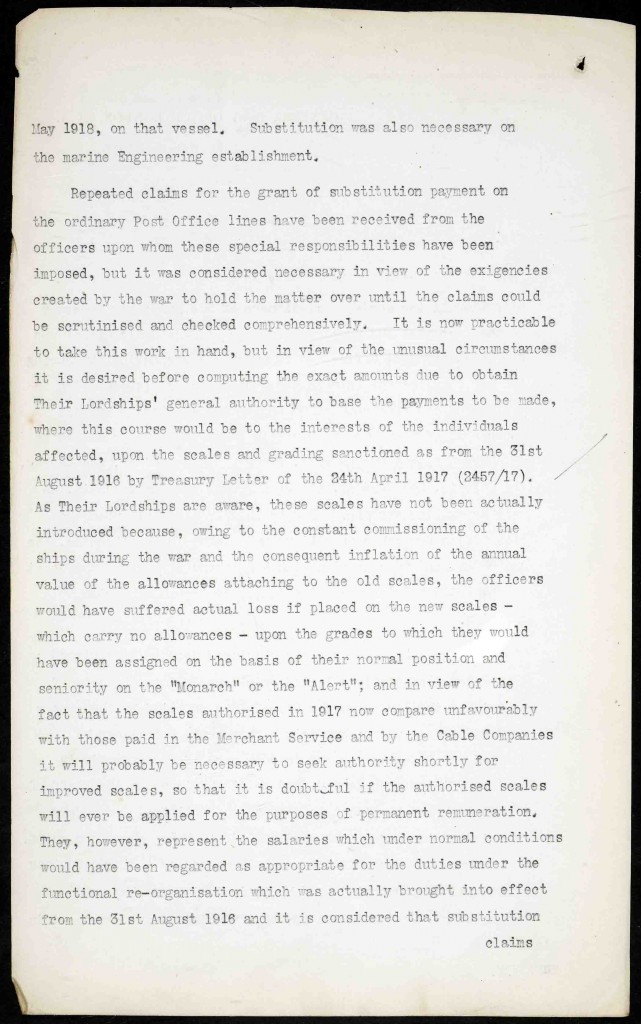 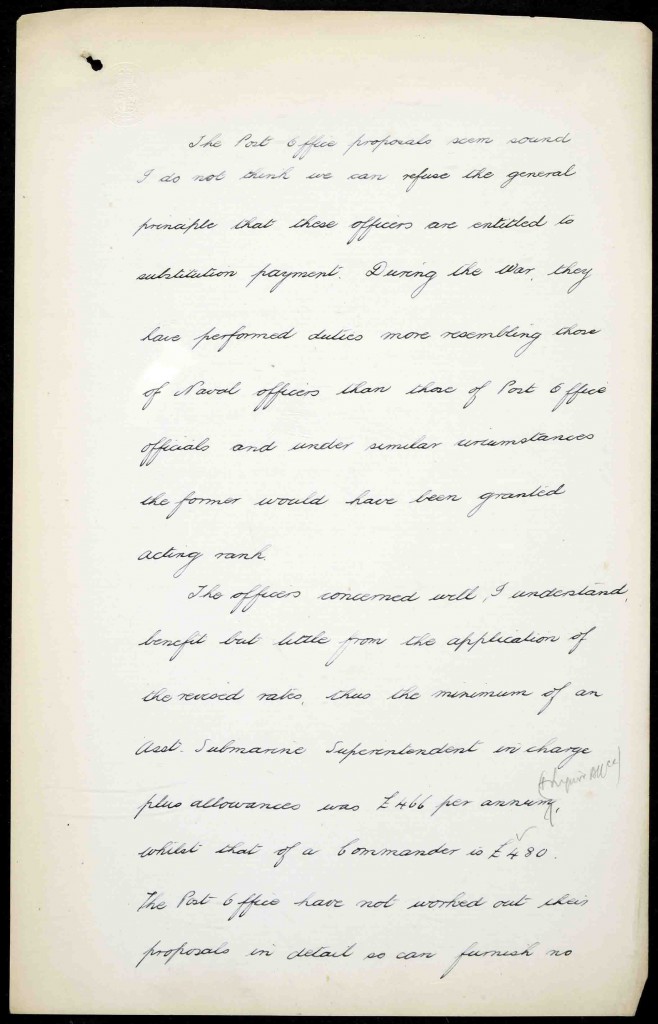 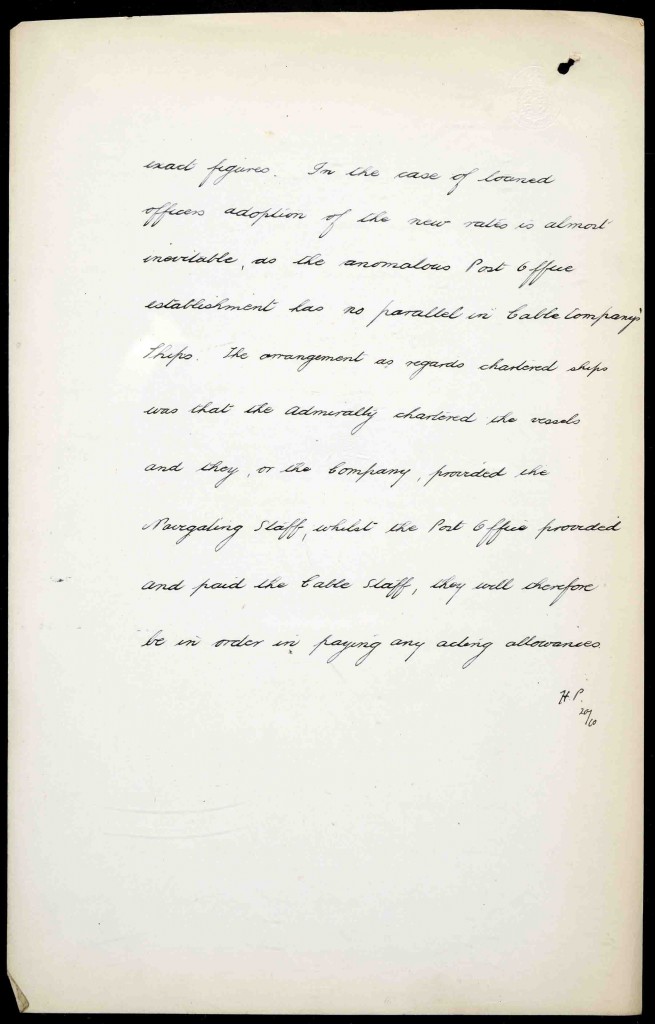 The female workforce were also taking on new responsibilities. As a great number of the Engineering Department’s workforce enlisted in the army, temporary workers were drafted in to replace them – thousands of whom were women. Roles for women prior to the war were predominantly secretarial, but in these settings, a wider variety of tasks – such as working a switchboard – were made possible.

As men and women began to work alongside one another during the war, comparisons between their work was more easily identifiable: documentation shown here states that people favoured the female ‘night telephonist’ over her male counterpart. Documents like these contributed to quashing more traditional notions around women’s abilities to do certain tasks, like voting – for which they were previously deemed ‘too emotional’. 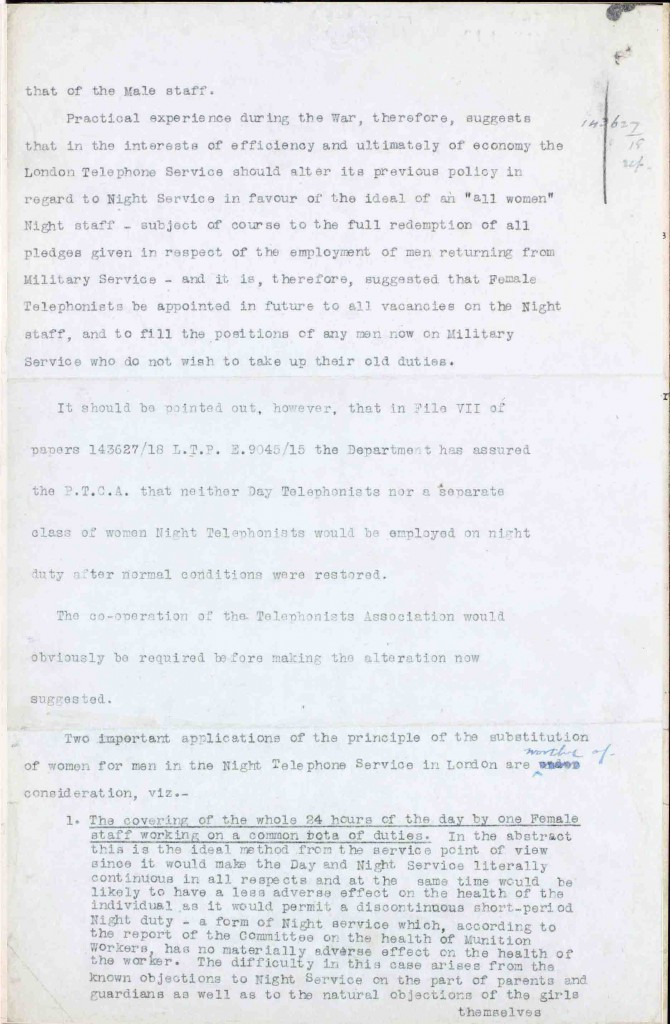 The Female Night Telephonist is a quicker and more accurate worker than the man; that she is more deft and skilful in manipulation, more assiduous in attention to signals, and the she responds more quickly and efficiently to exceptional demands at times of pressure

At first glance, this graph from Sir William Slingo’s report appears to suggest that there was a point where more women were being employed by the Engineering department than men. However, a closer inspection of the axes reveals that the numbers of male staff were in the thousands, while women were in the hundreds. It remains interesting that the number of women employed steadily rose throughout the war. 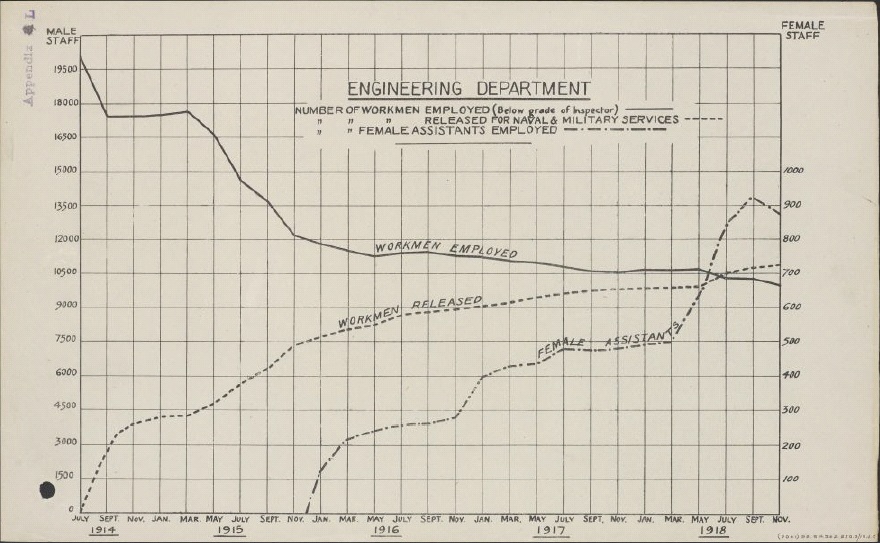 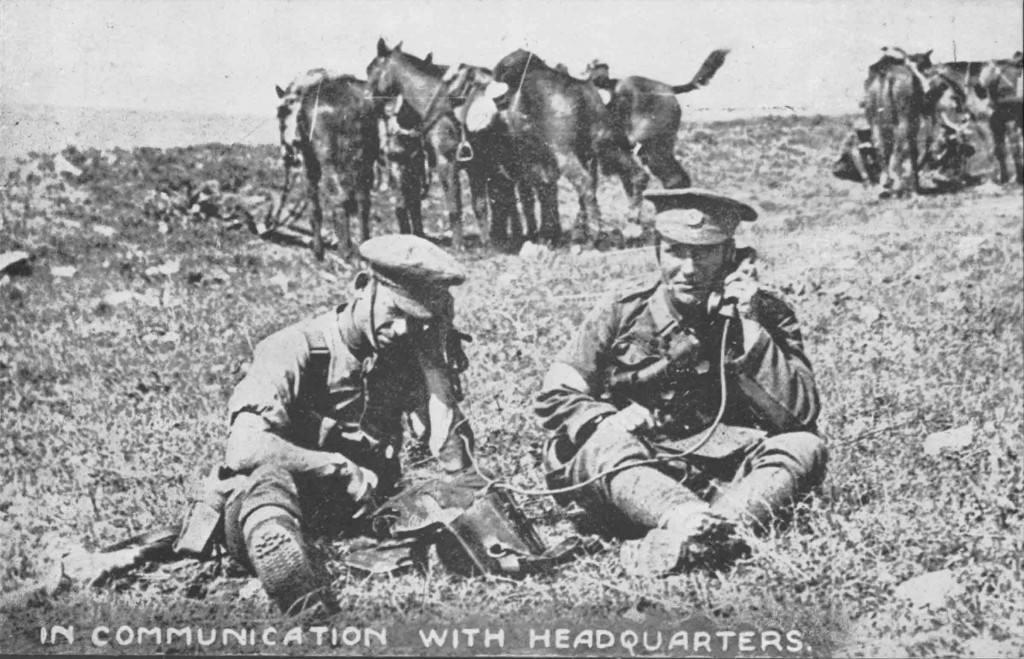