Excerpts from Shakespeare’s Will (PROB 1/4) 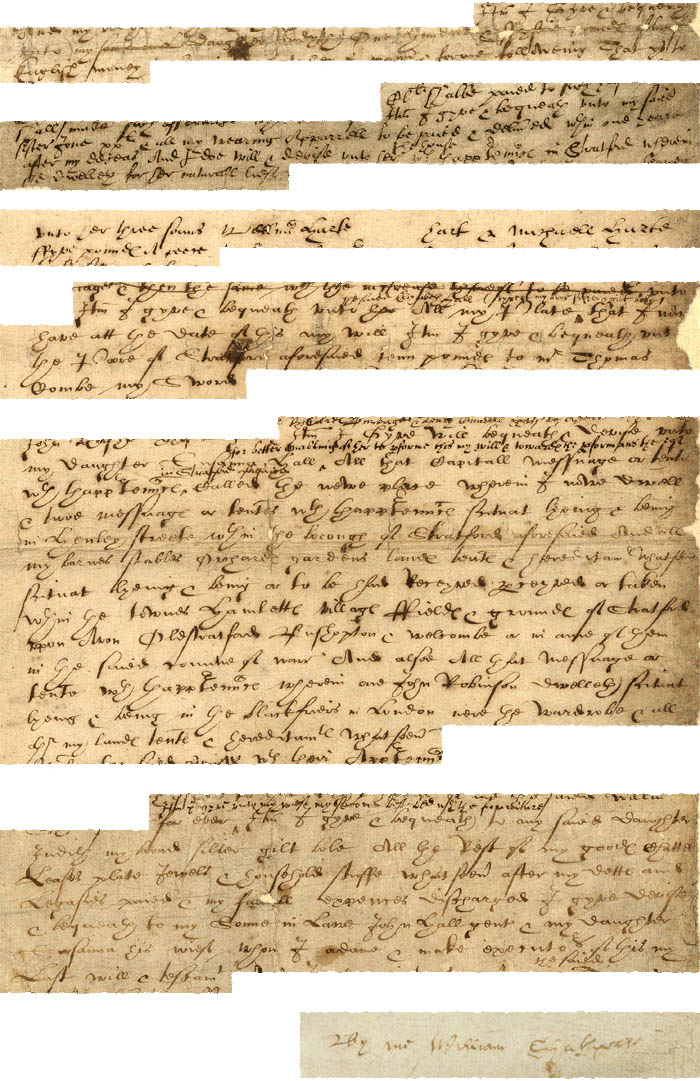 ‘…..Item I Gyve & bequeath unto my sonne in L[aw] Daughter Judyth One Hundred & ffyftie poundes of lawfull English money…..

…..Item I gyve and bequeath unto my saied sister Jone XXli & all my wearing Apparrell to be paied and delivered within one yeare after my deceas And I doe will & devise unto her the house with thappurtenances in Stratford wherein she dwelleth for her naturall lief…..

…..Item I Gyve Will bequeth & devise unto my Daughter Susanna Hall for better enabling of her to performe this my will & towardes the performans thereof All that Capitall Messuage or tenemente with thappurtenances in Stratford aforesaid called the newe place wherein I nowe dwell & two messuages or tenementes with thappurtenances scituat lyeing & being in Henley Streete within the borough of Stratford aforesaied And all my barnes stables Orchardes gardens landes tenementes & hereditaments whatsoever scituat lyeing & being or to be had Receyved perceyved or taken within the townes Hamlettes villages Fieldes & groundes of Stratford upon Avon Oldstratford Bushopton & Welcombe or in anie of them in the saied countie of warrwick And alsoe All that Messuage or tenemente with thappurtenances wherein one John Robinson dwelleth scituat lyeing & being in the blackfriers in London nere the Wardrobe & all other my landes tenementes & hereditamentes whatsoever…..

…..Item I gyve unto my wiefe my second best bed with the furniture Item I gyve & bequeath to my saied daughter Judith my broad silver gilt bowl. All the Rest of my goodes Chattel[s] Leases plate Jewels & household stuffe whatsoever after dettes and Legasies paied & my funerall expences discharged I gyve devise & bequeath to my Sonne in Lawe John Hall gent & my daughter Susanna his wief whom I ordaine & make executors of this my Last will & testament…..’

…..I leave one hundred and fifty pounds of legal English money to my son-in-law (deleted in will) daughter Judith…..

…..I leave to my sister, Joan, 20 pounds and all my clothes, which she should receive by the end of the first year after my death. I also give her the house in Stratford and everything belonging to it, for her to live in for the rest of her life…..

…..I leave to each of her three sons, William Harte, [first name is missing] Hart & Michael Harte, five pounds each…..

…..I leave to Elizabeth Hall all my plate (except my broad silver gilt bowl) that I have at the time of this will. I leave 10 pounds to the poor people of Stratford and my sword to Sir Thomas Combe…..

…..I leave to my daughter Susanna Hall (so that she is able to carry out my wishes in this will more easily), my house and lands in Stratford called New Place where I now live, two houses with lands in Henley Street in Stratford, and all my barns, stables, orchards, gardens, lands and houses in the towns hamlets, villages, fields & grounds of Stratford-upon-Avon, Oldstratford Bushopton & Welcombe in the county of Warwick. I also leave to her the house and lands in which John Robinson lives, near the Wardrobe in Blackfriars, London, and all my other lands and buildings…..

…..(the next sentence has been added in the space between the lines) I leave my second best bed with all the bedding and curtains to my wife. I leave my broad silver gilt bowl to my daughter Judith. After my debts have been paid, these gifts in my will have been given and the costs of my funeral have been paid, I leave all the rest of my belongings, leases, plate, jewels and household stuff to my son-in-law John Hall and my daughter Susanna, his wife, who are the executors of this will…..

(signed) By me William Shakspeare