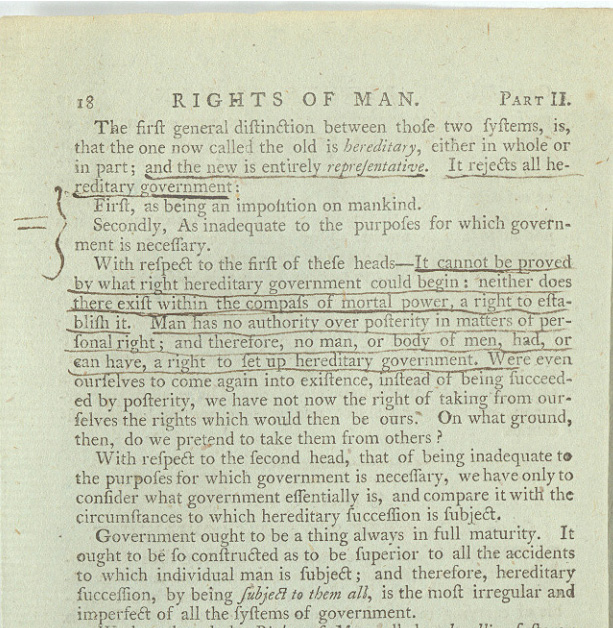 ‘Hereditary government’: Government that is passed down by inheritance, e.g. a son of a king becomes king after his father dies
‘Representative government’: Government in which the people are represented by individuals chosen from among them, usually by election
‘Hereditary succession’: the act of passing property, a job or a title from one family member to another, e.g. from father to son

The first general distinction between those two systems, is that the one now called the old is hereditary, either in whole or in part; and the new is entirely representative. It rejects all hereditary government:
First, as being an imposition [forced burden] on mankind.
Secondly, as inadequate to the purposes for which government is necessary.
With respect to the first of these heads [ideas] – It cannot be proved by what right hereditary government could begin: neither does there exist within the compass [range] of mortal power, a right to establish it. Man has no authority over posterity [future generations] in matters of personal right; and therefore, no man, or body of men, had, or can have, a right to set up hereditary government. Were even ourselves to come again into existence, instead of being succeeded by posterity, we have not now the right of taking from ourselves the rights which would then be ours. On what ground, then, do we pretend to take them from others?
With respect to the second head, that of being inadequate to the purposes for which government is necessary, we have only to consider what government essentially is, and compare it with the circumstances to which hereditary succession is subject.
Government ought to be a thing always in full maturity. It ought to be so constructed as to be superior to all the accidents to which individual man is subject; and therefore, hereditary succession, by being subject to them all, is the most irregular and imperfect of all the systems of government.

« Return to Why was radical writer Thomas Paine significant?

[See the explanations with the transcript for key terms in the document.]