A handbill entitled ‘Fellow Weavers’, printed in March 1812 in Manchester, one of the main centres for the cotton industry. Catalogue ref: HO 40/1/1, f.108 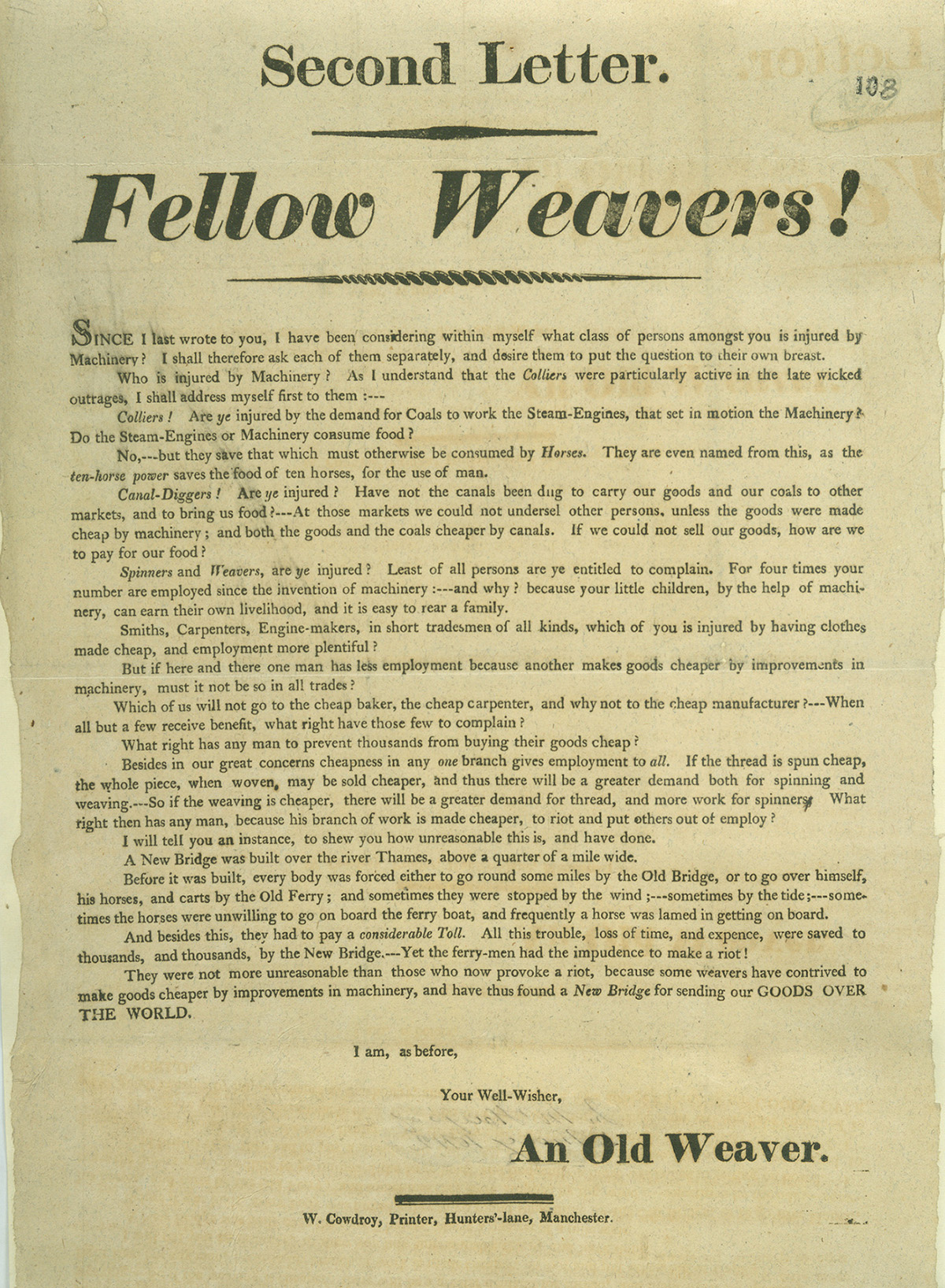 Since I last wrote to you, I have been considering within myself what class of persons amongst you is injured by Machinery? I shall therefore ask each of them separately, and desire them to put the question to their own breast.

Who is injured by Machinery? As I understand that the Colliers were particularly active in the late wicked outrages, I shall address myself first to them: –

Colliers! [Coal worker/dealers in coal] Are ye injured by the demand for Coals to work the steam-engines that set in motion the Machinery? Do the Steam-Engines or Machinery consume food?

No, – but they save that which must otherwise be consumed by Horses. They are even named from this, as the ten-horse power saves the food of ten horses, for the use of man.

Canal-Diggers! Are ye [you] injured? Have not the canals been dug to carry our goods and our coals to other markets, and to bring us food? – At those markets we could not undersell other persons, unless the goods were made cheap by machinery; and both the goods and the coals cheaper by canals. If we could not sell our goods, how are we to pay for our food?

Spinners and Weavers, are ye injured? Least of all persons are ye entitled to complain. For four times your number are employed since the invention of machinery: – and why? Because your little children, by the help of machinery, can earn their own livelihood, and it is easy to rear a family.

Smiths [Metal workers e.g. blacksmith/silversmith] Carpenters, Engine-makers, in short tradesmen of all kinds, which of you is injured by having clothes made cheap, and employment more plentiful?

But if here and there one man has less employment because another makes goods cheaper by improvements in machinery, must it not be so in all trades?

Which of us will not go to the cheap baker, the cheap carpenter, and why not to the cheap manufacturer? – When all but a few receive benefit, what right have those few to complain?

What right has any man to prevent thousands from buying their goods cheap?

Besides in our great concerns cheapness in any one branch gives employment to all. If the thread is spun cheap, the whole piece, when woven, may be sold cheaper, and thus there will be a greater demand both for spinning and weaving. – So if the weaving is cheaper, there will be a greater demand for thread, and more work for spinners. What right then has any man, because his branch of work is made cheaper, to riot and put others out of employ?

I will tell you an instance, to shew you how unreasonable this is, and have done.

A New Bridge was built over the river Thames, above a quarter of a mile wide.

Before it was built, everybody was forced either to go round some miles by the Old Bridge, or to go over himself, his horses, and carts by the Old Ferry; and sometimes they were stopped by the wind; – sometimes by the tide; – sometimes the horses were unwilling to go on board the ferry boat, and frequently a horse was lamed in getting on board.

And besides this, they had to pay a considerable Toll. All this trouble, loss of time, and expence, were saved to thousands, and thousands, by the New Bridge. – Yet the ferry-men had the impudence to make a riot!

They were not more unreasonable than those who now provoke a riot, because some weavers have contrived to make goods cheaper by improvements in machinery, and have thus found a New Bridge for sending our GOODS OVER THE WORLD.