Page 1 out of 2. A leaflet from the Women’s Social and Political Union describing the force-feeding of Suffragettes at Walton Gaol, Liverpool, December 1909. Catalogue ref: HO 144/1052/187234 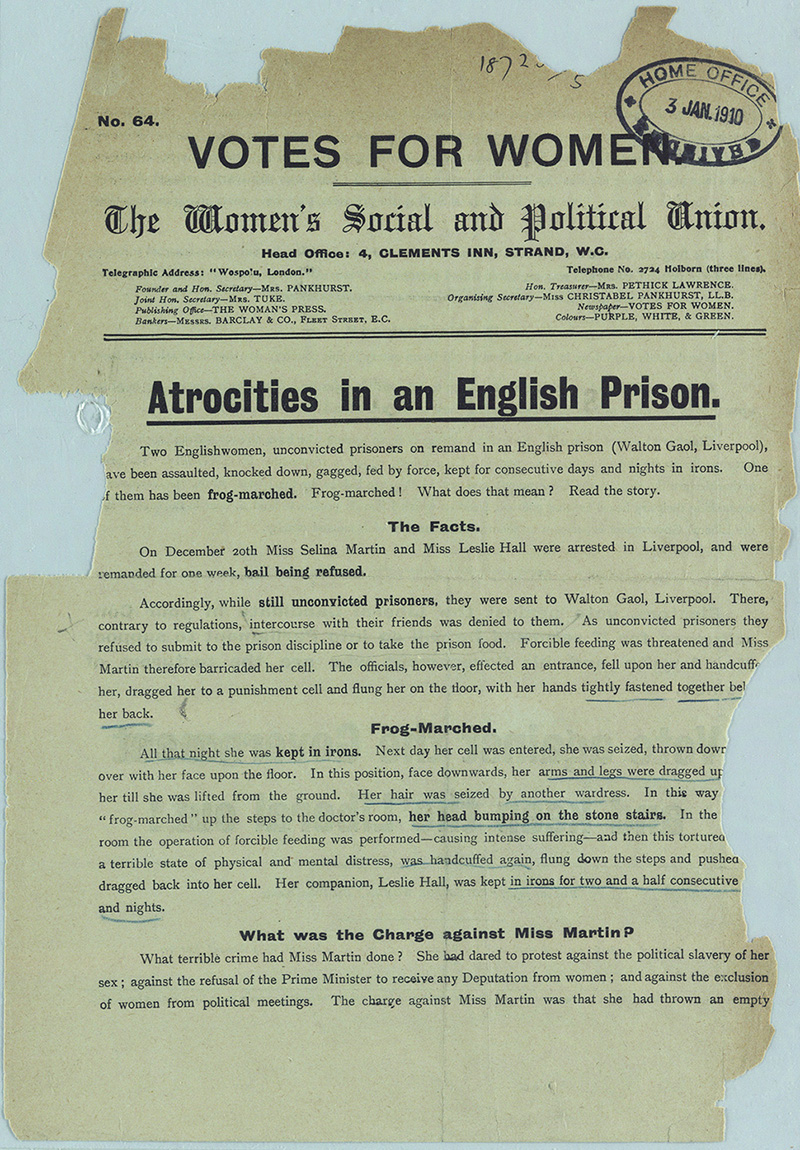 The Women’s Social and Political Union

ATROCITIES IN AN ENGLISH PRISON.

Two Englishwomen, un-convicted prisoners on remand [sent back into custody by court order to wait for a trial] in an English prison (Walton Gaol, Liverpool), have been assaulted, knocked down, gagged, fed by force, kept for consecutive days and nights in irons. One of them has been frog-marched. [held by the arms and forced to walk] Frog-marched! What does that mean? Read the story.

On December 20th Miss Selina Martin and Miss Leslie Hall were arrested in Liverpool, and were remanded for one week, bail being refused. [Bail: release of arrested person in exchange for a sum of money, to ensure return for their trial]

Accordingly, while still un-convicted prisoners, they were sent to Walton Gaol, Liverpool. There, contrary to regulations, intercourse [communication] with their friends was denied to them. As un-convicted prisoners they refused to submit to the prison discipline or to take the prison food. Forcible feeding was threatened and Miss Martin therefore barricaded [blocked access to] her cell. The officials, however, effected [made] an entrance, fell upon her and handcuffed her, dragged her to a punishment cell and flung her on the floor, with her hands tightly fastened together behind her back.

All that night she was kept in irons. Next day her cell was entered, she was seized, thrown down, rolled over with her face upon the floor. In this position, face downwards, her arms and legs were dragged up behind her till she was lifted from the ground. Her hair was seized by another wardress [female prison guard]. In this way she was “frog-marched” up the steps to the doctor’s room, her head bumping on the stone stairs. In the doctor’s room the operation of forcible feeding was performed – causing intense suffering – and then this tortured girl, in a terrible state of physical and mental distress, was handcuffed again, and flung down the steps and pushed and dragged back into her cell. Her companion, Leslie Hall, was kept in irons for two and a half consecutive days and nights.

What was the Charge against Miss Martin?

What terrible crime had Miss Martin done? She had dared to protest against the political slavery of her sex; against the refusal of the Prime Minister to receive any Deputation [representative group] from women; and against the exclusion of women from political meetings. The charge against Miss Martin was that she had thrown an empty