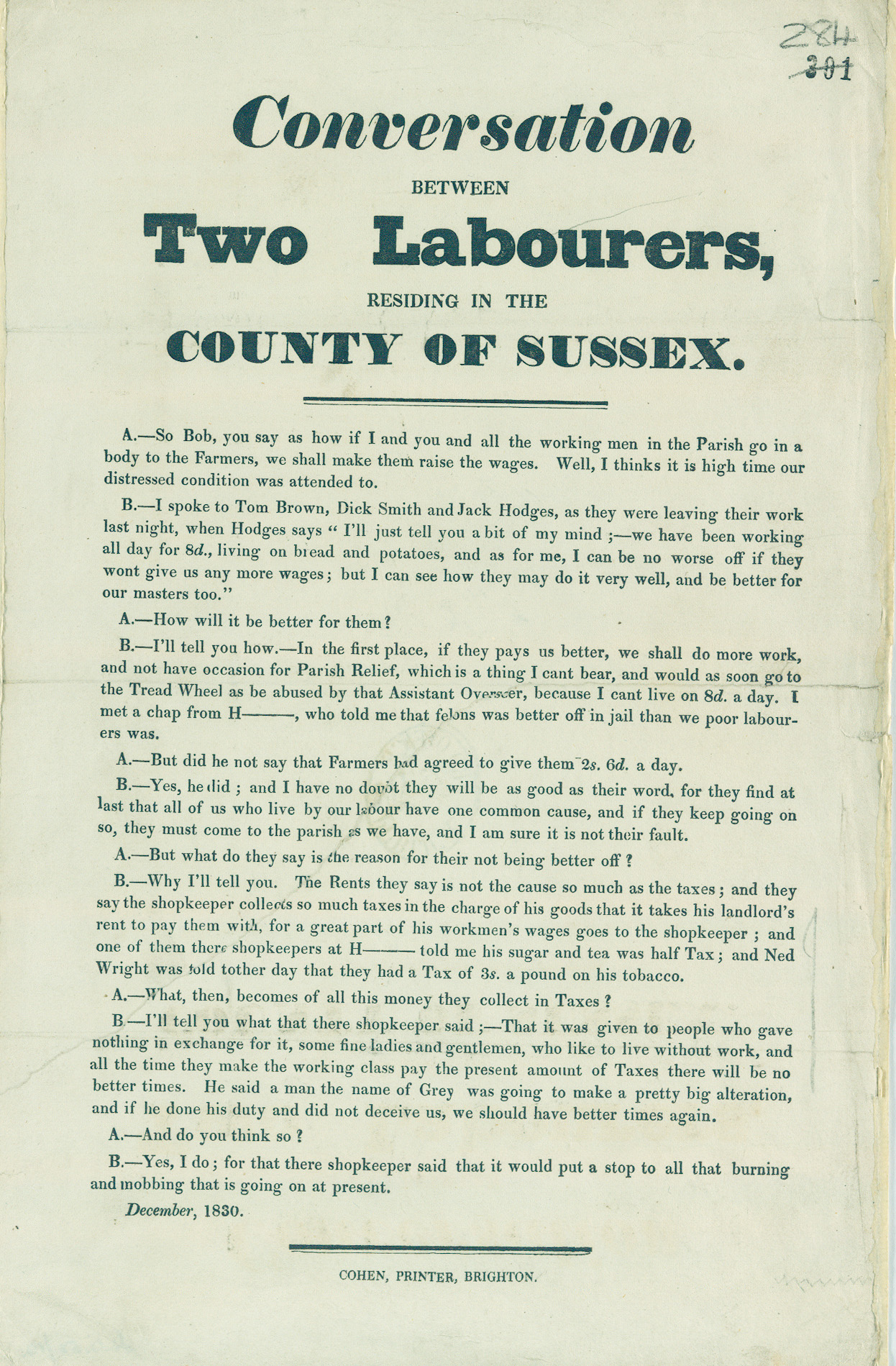 Tread wheel: a punishment used in prisons. It was a wheel turned by a person treading, climbing, or pushing with their feet.

Parish Relief: Each parish was responsible for giving help to poor people in their area and for raising the taxes to do this. Overseers collected this tax. This system was sometimes abused and the able-bodied poor had to work very hard for the help they received.

Conversation
BETWEEN
Two Labourers,
RESIDING IN THE
COUNTY OF SUSSEX.

A. – So Bob, you say as how if I and you and all the working men in the Parish go in a body to the Farmers, we shall make them raise the wages. Well, I thinks it is high time our distressed condition was attended to.

B. – I spoke to Tom Brown, Dick Smith and Jack Hodges, as they were leaving their work last night, when Hodges says “I’ll just tell you a bit of my mind; – we have been working all day for 8d., living on bread and potatoes, and as for me, I can be no worse off if they won’t give us any more wages; but I can see how they may do it very well, and be better for our masters too.”

B. – I’ll tell you how. – In the first place, if they pays us better, we shall do more work, and not have occasion for Parish Relief, which is a thing I can’t bear, and would as soon go to the Tread Wheel as be abused by that Assistant Overseer, because I can’t live on 8d (pennies) a day. I met a chap from H–––––, who told me that felons was better off in jail than we poor labourers was.

A. – But did he not say that Farmers had agreed to give them 2 shillings 6 pennies. a day.

B. – Yes, he did; and I have no doubt they will be as good as their word, for they find at last that all of us who live by our labour have one common cause, and if they keep going on so, they must come to the parish as we have, and I am sure it is not their fault.

A. – But what do they say is the reason for their not being better off?

B. – Why I’ll tell you. The Rents they say is not the cause so much as the taxes; and they say the shopkeeper collects so much taxes in the charge of his goods that it takes his landlord’s rent to pay them with, for a great part of his workmen’s wages goes to the shopkeeper; and one of them there shopkeepers at H––––– told me his sugar and tea was half Tax; and Ned Wright was told tother day that they had a Tax of 3 shillings a pound on his tobacco.

A. – What, then, becomes of all this money they collect in Taxes?

B. – I’ll tell you what that there shopkeeper said; –That it was given to people who gave nothing in exchange for it, some fine ladies and gentlemen, who like to live without work, and all the time they make the working class pay the present amount of Taxes there will be no better times. He said a man the name of Grey was going to make a pretty big alteration, and if he done his duty and did not deceive us, we should have better times again.

B.– Yes, I do; for that there shopkeeper said that it would put a stop to all that burning and mobbing that is going on at present.