The people of South Shields and the surrounding neighbourhood held a meeting in their town hall on 31 December 1830. The purpose of the meeting was to discuss petitioning Parliament about reform. The town wanted to be able to elect their own MPs. The meeting was called by the magistrates and chaired by a local Justice of the Peace. They debated the wording of a petition and made it available in the town hall and in shops so that all classes of people could sign it. This is the petition that was adopted. 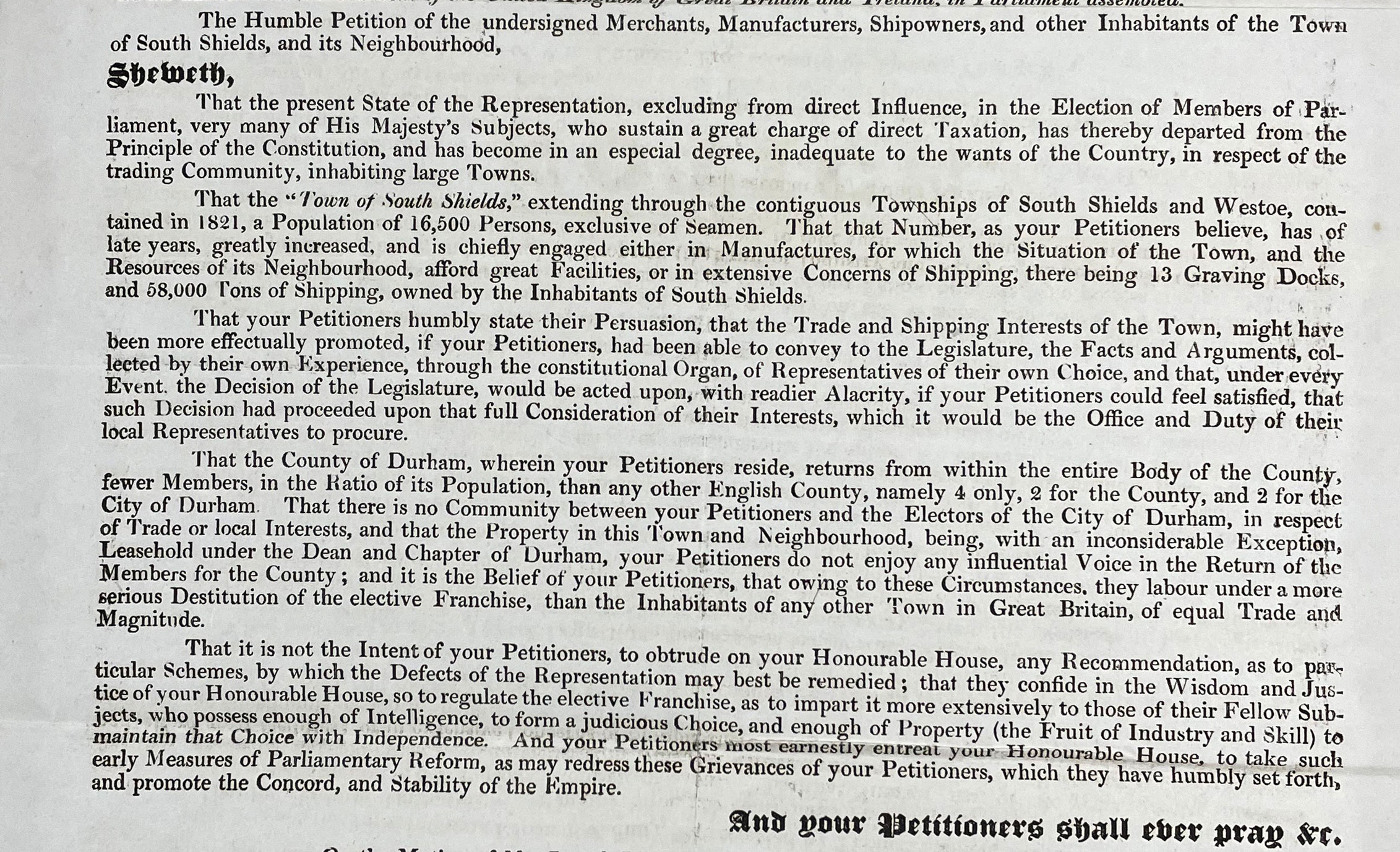 Transcript Note: Some words are explained in brackets, and some asterisked* phrases are explained at the end of transcript. To the Honourable the Commons of the United Kingdom of Great Britain and Ireland, in Parliament assembled. The Humble Petition of the undersigned Merchants, Manufacturers, Ship owners and other Inhabitants of the Town of South Shields, and its neighbourhood,

Sheweth, [shows] That the “Town of South Shields”, extending through the contiguous [neighbouring] Townships of South Shields and Westoe, contained in 1821, a Population of 16,500 Persons, exclusive of Seamen. That the Number, as your Petitioners believe, has of late years, greatly increased, and is chiefly engaged either in Manufactures, for which the Situation of the Town, and the Resources of its Neighbourhood, afford built [have] great Facilities, or in extensive Concerns of Shipping, there being 13 Graving Docks [these are dry docks where ships could be built and repaired], and 58,000 Tons of Shipping, owned by the Inhabitants of South Shields. That your Petitioners humbly state their Persuasion, that the Trade and Shipping Interests of the Town, might have been more effectually [better] promoted, if your Petitioners, had been able to convey to the Legislature, the Facts and Arguments, collected by their own Experience, through the constitutional [Parliament], Organ of Representatives of their own Choice [M.P.s elected by them], and that, under every Event, the Decision of the Legislature [Parliament] , would be acted upon, with readier Alacrity [speed], if your Petitioners could feel satisfied, that such Decision had proceeded upon that full Consideration of their Interests, which it would be the Office and Duty of their local Representatives to procure [get]. That the County of Durham, wherein your Petitioners reside, returns from within the entire Body of the County, fewer Members [M.Ps], in the Ratio of its Population, than any other English County, namely 4 only, 2 for the County, and 2 for the City of Durham. That there is no Community between your Petitioners and the Electors of the City of Durham, in respect of Trade or local Interests, and that the Property* in this Town and Neighbourhood, being, with an inconsiderable Exception, Leasehold under the Dean and Chapter of Durham, your Petitioners do not enjoy any influential Voice in the Return of the Members for the County; and it is the Belief of your Petitioners, that owning to these Circumstances, they labour [they suffer a greater lack of the right to vote.] under a more serious Destitution of the elective Franchise, than the Inhabitants of any other Town in Great Britain, of equal Trade and Magnitude [size]. That it is not the Intent** of your Petitioners, to obtrude on your Honourable House, any Recommendation, as to particular Schemes, by which the Defects of the Representation may best be remedied; that they confide*** in the Wisdom and Justice of your Honourable House, so to regulate the elective Franchise, as to impart it more extensively to those of their Fellow Subjects, who possess enough of Intelligence, to form a judicious Choice, and enough of Property (the Fruit of Industry and Skill) to maintain that Choice with Independence. And your Petitioners most earnestly entreat [request] your Honourable House, to take such early Measures of Parliamentary Reform, as may redress [set right] these Grievances of your Petitioners, which they have humbly set forth, and promote the Concord [peaceful relations] , and Stability of the Empire. And your Petitioner shall ever pray &c.

* Because the property in the area is mostly leasehold, the people writing the petition do not have a vote. [To qualify to vote, you had to own a certain amount of property].

*** They trust in the wisdom and the justice of Parliament to adjust the right to vote as to give to more of their fellow subjects who have enough intelligence to make a wise choice and enough property… to make that choice themselves. [This suggests that a poor person might be tempted to vote a certain way in return for money.]