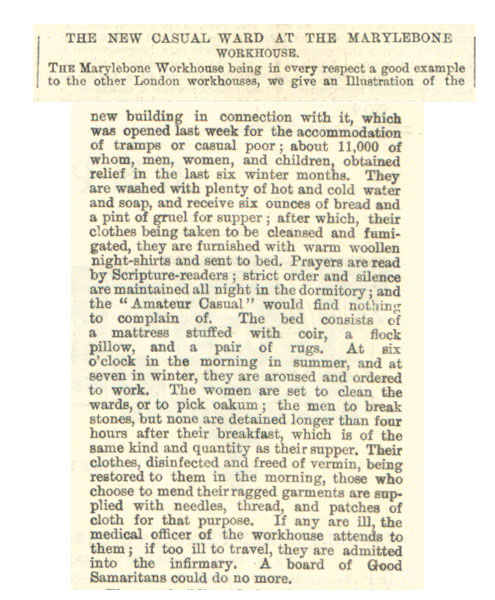 Extract from article about the new ward for the poor at Marylebone Workhouse, Illustrated London News, 1867 (ZPER 34/51)

THE NEW CASUAL WARD AT THE MARYLEBONE WORKHOUSE

The Marylebone Workhouse being in every respect a good example to the other London workhouses, we give an Illustration of the new building in connection with it, which was opened last week for the accommodation of tramps or casual poor; about 11,000 of whom, men and women and children, obtained relief in the last six winter months. They are washed with plenty of hot and cold water and soap, and receive six ounces of bread and a pint of gruel [thin soup] for supper; after which, their clothes being taken to be cleansed [washed] and fumigated [hung in smoke to kill lice], they are furnished [provided] with warm woollen night-shirts and sent to bed. Prayers are read by Scripture readers; strict order and silence are maintained all night in the dormitory [sleeping room]; and the “Amateur Casual” *[see note below] would find nothing to complain of. The bed consists of a mattress stuffed with coir, a flock pillow, and a pair or rugs. At six o’clock in the morning in the summer, and at seven in the morning in winter, they are aroused and ordered to work. The women are set to clean the wards, or to pick oakum; the men to break stones, but none are detained longer than four hours after their breakfast, which is of the same kind of quality as their supper. Their clothes, disinfected and freed from vermin, being restored to them in the morning, those who chose to mend their ragged garments are supplied with needles, threads and patches of cloth for that purpose. If any are ill, the medical officer attends to them; if too ill to travel, they are admitted to the infirmary. A board of Good Samaritans could do no more.

*A journalist called James Greenwood went undercover and spent a night in Lambeth workhouse in 1866. His story was printed in the Pall Mall Gazette under the name of “the Amateur Casual”. It was one of the first newspaper articles to describe what it was like to be poor, unlike this article from the Illustrated London News. Later Greenwood’s article was published as a pamphlet called “A Night in a Workhouse”.