Children in the mines 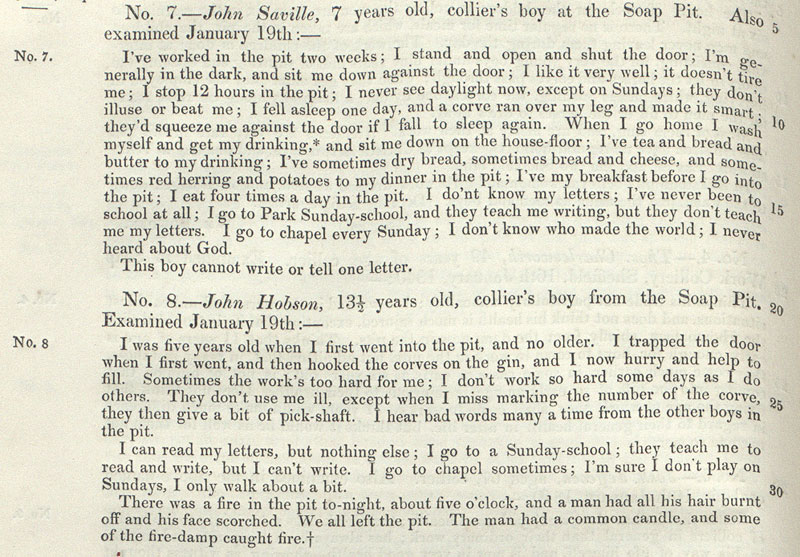 Extract from the Reports and Evidence from Sub-Commissioners published by Children’s Employment Commission on the mines, 1842.

No.7 I have worked in the pit for two weeks; I stand and open and shut the door; I’m generally in the dark, and sit me down against the door; I like it very well, it doesn’t tire me; I stop 12 hours in the pit; I never see daylight now, except on Sundays; they don’t illuse or beat me; I fell asleep one day, and a corve [coal truck] ran over my leg and made it smart; they’d squeeze me against the door if I fall to sleep again. When I go home I wash myself and get my drinking [local word for tea] and sit me down on the house floor; I’ve tea and bread and butter for my drinking; I’ve sometimes dry bread, sometimes bread and cheese, and sometimes red herring and potatoes to my dinner in the pit [coal mine]; I’ve my breakfast before I go into the pit; I eat four times a day in the pit. I don’t know my letters; I’ve never been to school at all; I go to Park Sunday-school, and they teach me writing, but they don’t teach me my letters. I go to chapel every Sunday; I don’t know who made the world; I never heard about God.

This boy cannot write or tell one letter.

No. 8 I was five years old when I first went into the pit, and no older. I trapped [a boy employed to open and shut the trap doors in the mine, to keep the air flowing and stop the build up of gas which could cause fires] the door when I first went, then hooked the corves on the gin [horse powered engine used in to raise the coals to the surface], and I now hurry [a young person who pushed the wagons along inside the pit] and help to fill. Sometimes the work is too hard for me; I don’t work so hard some days as I do others. They don’t use me ill, except when I miss marking the number of the corve [coal truck], they then give a pit of pick-shaft [beat with a wooden stick]. I hear bad words many a time from the other boys in the pit.

I can read my letters, but nothing else; I go to Sunday-school; they teach me to read and write, but I can’t write. I go to chapel sometimes; I’m sure I don’t play on Sundays, I only walk about a bit.

There was a fire in the pit to-night, about five o’clock, and a man had all his hair burnt off and his face was scorched. We all left the pit. The man had a common candle [ ] and some fire-damp [a gas found in coal mines which can explode] caught fire.