Source 4: Report on the sanitary condition of Newport 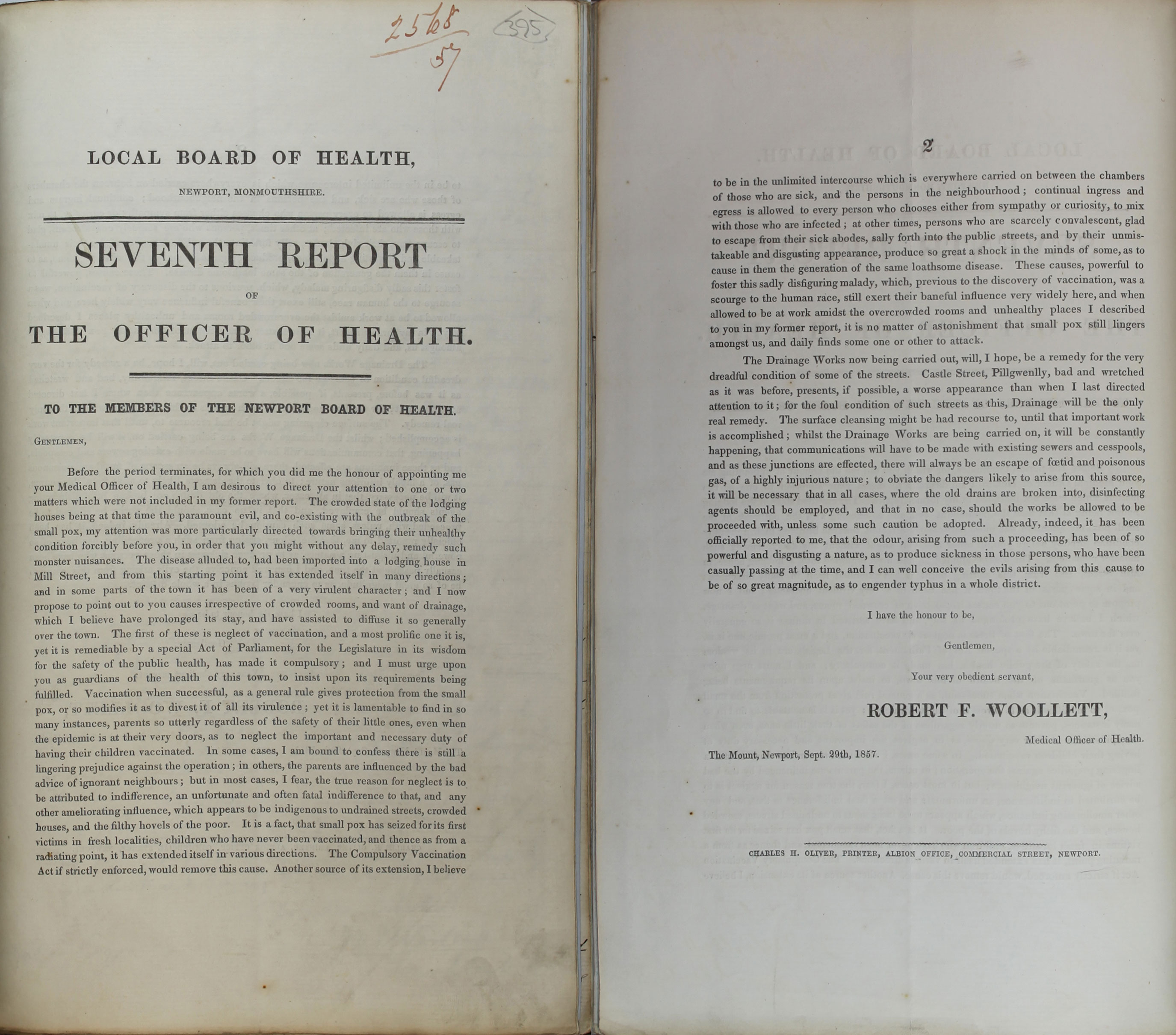 LOCAL BOARD OF HEALTH,

SEVENTH REPORT OF THE OFFICER OF HEALTH.

TO THE MEMBERS OF THE NEWPORT BOARD OF HEALTH

The first of these is neglect of vaccination, and a most prolific [widespread] one it is, yet it is remediable [solved] by a special Act of Parliament, for the Legislature in its wisdom for the safety of the public health, has made it compulsory; and I must urge upon you as guardians of the health of this town, to insist upon its requirements being fulfilled. Vaccination when successful, as a general rule gives protection from the small pox, or so modifies it as to divest it of all its virulence [harshness]; yet it is lamentable [regrettable] to find in so many instances, parents so utterly regardless of the safety of their little ones, even when the epidemic is at their very doors, as to neglect the important and necessary duty of having their children vaccinated. In some cases, I am bound to confess there is still a lingering prejudice against the operation; in others, the parents are influenced by the bad advice of ignorant neighbours; but in most cases, I fear, the true reason for neglect is to be attributed to indifference, and unfortunate and often fatal indifference to that, and any other ameliorating [improving] influence, which appears to be indigenous [stemming from] to undrained streets, crowded houses, and the filthy hovels of the poor. It is a fact, that small pox has seized for its first victims in fresh localities, children who have never been vaccinated, and thence as from a radiating point, it has extended itself in various directions. The Compulsory Vaccination Act if strictly enforced, would remove this clause. Another source of its extension, I believe to be in the unlimited intercourse [contact] which is everywhere carried on between the chambers of those who are sick, and the persons in the neighbourhood; continual ingress [entering] and egress [leaving] is allowed to every person who chooses either from sympathy or curiosity, to mix with those who are infected; at other times, persons who are scarcely convalescent, glad to escape from their sick abodes, sally forth into the public streets, and by their unmistakable and disgusting appearance, produce so great a shock in the minds of some, as to cause in them the generation of the same loathsome disease. These causes, powerful to foster this sadly disfiguring malady, which, previous to the discovery of vaccination was a scourge to the human race, still exert their baneful influence very widely here, and when allowed to be at work amidst the overcrowded rooms and unhealthy places I described to you in my former report, it is no matter of astonishment that small pox still lingers amongst us, and daily finds someone or other to attack.