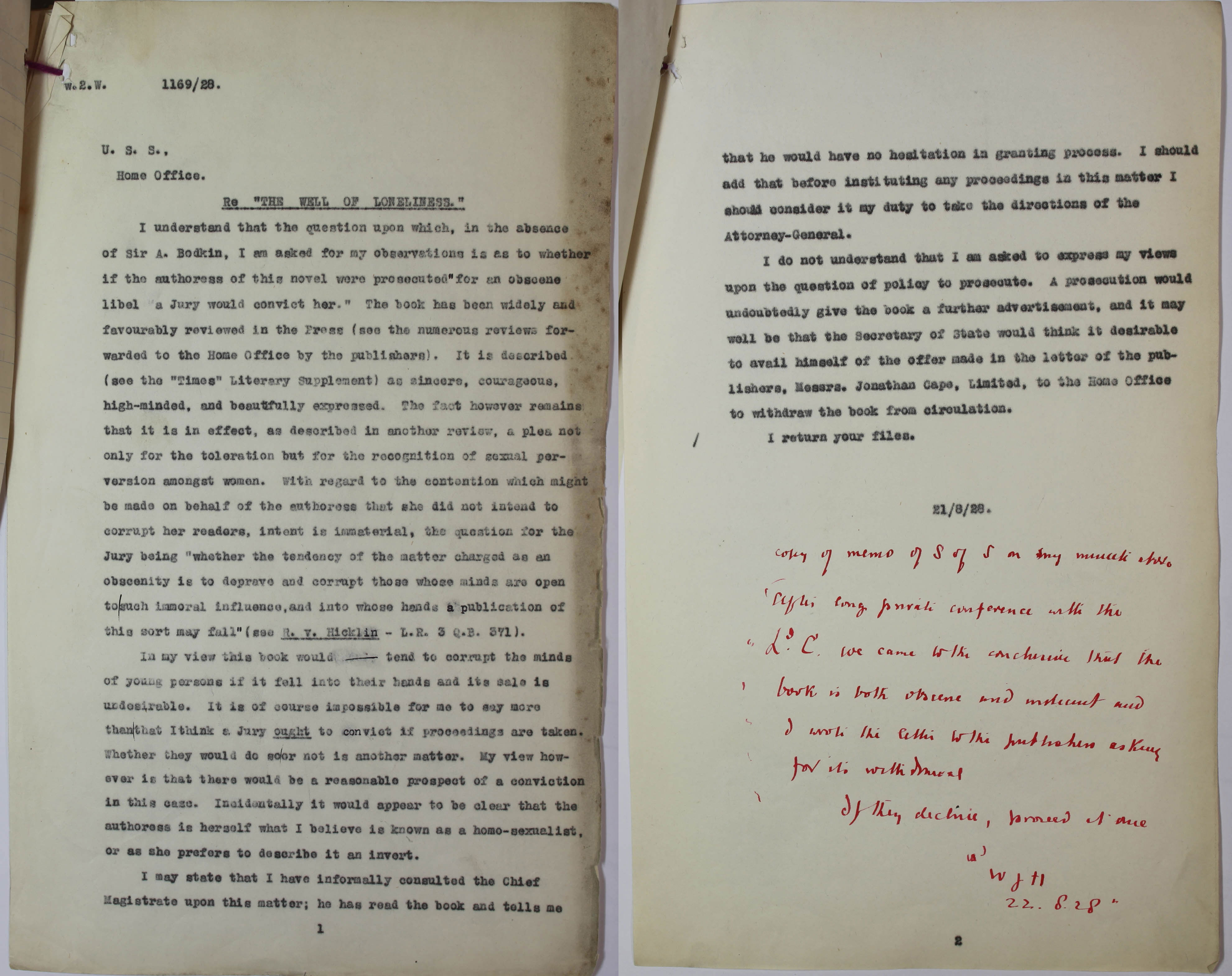 A letter from the Director of Public Prosecutions to the Home Office commenting on a book entitled: ‘The Well of Loneliness’ by Radclyffe Hall first published by Jonathan Cape Limited. The handwritten note by Home Secretary added at the end, said that prosecution would follow immediately if the book was not withdrawn by the publishers. 21 August, 1928 (Catalogue ref: DPP 1/88)

U.S.S [Under Secretary of State?]

Re “THE WELL OF LONELINESS”

I understand that the question upon which, in the absence of Sir A. Bodkin, I am asked for my observations is as to whether if the authoress of this novel were prosecuted “for obscene libel a jury would convict her”. The book has been widely and favourably reviewed in the Press (see the numerous reviews forwarded to the Home Office by the publishers). It is described (see “Times” Literary Supplement) as sincere, courageous, high-minded, and beautifully expressed. The fact however remains that it is in effect, as described in another review, a plea not only for toleration but for the recognition of sexual perversion amongst women. With regard to the contention which might be made on behalf of the authoress that she did not intend to corrupt her readers, intent is immaterial, the question for the Jury being “whether the tendency of the matter charged as an obscenity is to deprave and corrupt those whose minds are open to such immoral influence, and into whose hands a publication of this sort may fall” (see R. V. Hicklin-L.R. 3. Q.B. 371).

In my view the book would tend to corrupt the minds of young persons if it fell into their hands and its sale is undesirable. It is of course impossible for me to say more than that I think a Jury ought to convict if proceedings are taken. Whether they wold do so or not is another matter. My view however, is that there would be reasonable prospect of a conviction in this case. Incidentally it would appear to be clear that the authoress is herself what I believe is known as homo-sexualist, or as she prefers to describe it as an invert.

I may say that I have informally consulted the Chief Magistrate upon this matter; he has read the book and tells me that he would have no hesitation in granting process. I should add that before instituting any proceedings in this matter I should consider it my duty to take the directions of the Attorney-General.

I do not understand that I am asked to express my views upon the question of policy to prosecute. A prosecution would undoubtedly give the book a further advertisement, and it may well be that the Secretary of State would think it desirable to avail himself of the offer made in the letter of the publishers, Messrs. Jonathan Cape, Limited, to the Home Office to withdraw the book from circulation.

I return your files.